Conversations overheard at the Uluru sunrise viewing area:
A pair of Aussie tourists:
“So what’s it made of?”
“It’s…rock…it’s made of rock”

An English couple:
“You would think there would be aboriginal people everywhere telling us about their culture. I mean they don’t have jobs so should be out here”
“Yes, we saw a few at the Cultural Centre didn’t we but not a word from them!”

As the good old Danish saying goes “you have to hear a lot before your ears fall off”. I reckon though if you hung around the sunrise viewing area for a while your ears might come a bit loose actually! Well yes Uluru is actually made of rock! And yes, it would only be fair to expect a mob from the Anangu people to show up for free everyday at 6.30am with a complimentary hot cuppa and tell us about their culture – just like if you visit London there are of course unemployed Londoners on the streets to tell you all about the British culture! Bugger me, my ears are falling off!

It’s so remote and the environment is dry, warm, hostile and alien – and at the same time it’s so touristy! Uluru is actually one of the 3 major tourist spots in Australia (the other 2 being Cairns with the great barrier reef and Sydney) Such a bloody weird feeling to be so far from everything and then going to a cafe and eating Spaghetti Carbonara for lunch. To stay at Uluru means staying at the Voyages resort about 18 kilometers away, the resort is like a small town and it’s a circus 1 hour before sunrise and sunsets when all the tours depart. Despite all of this I had an amazing time. The resort was actually a fine experience and fairly low key and the sunrises and sunsets weren’t crowded at all to my surprise, it was easy to find me a peaceful spot. The walks around Uluru and Kata Tjuta were not crowded either – I had no problem walking away from everyone and getting landscape shots without people in them (many years of being an introvert has honed my now extraordinary how-to-avoid-people skills!) 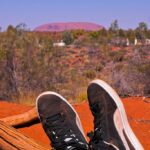 As earlier stated I love the red desert and I can sit and stare at Uluru for hours (which is what I am doing in the pic to the left, this is from one of the lookouts on top a sand dune at the resort) Walking around it is a great and interesting walk but you’re so close it’s hard to appreciate the size. I reckon Uluru is best appreciated from the distance or from the air. Have a look at this picture; I shot it from a helicopter and it really shows you how massive it is and how impressive it looks in this flat red desert: A few facts about “The Rock formerly known as Ayers” although that joke is getting old! It’s made of rock yep, It’s actually made of sandstone rock and it gets its red colour simply because the iron in the sandstone rusts due to weathering! At it’s heighest point Uluru stands 348 metres above the plain. It’s circumference is a mighty 9.4 kilometers and walking around is a great experience and takes a couple of hours. Contrary to popular belief Uluru is not one huge boulder just sitting there like someone dropped it from above. Uluru is actually the top of a mountain extending below the earth for several kilometers (there are different theories on this).

For the Anangu people Uluru is a very important sacred site and the ancestral being Kuniya still lives in Uluru. Uluru has many sacred sites for the Anangu people and the climb is of great spiritual importance to them and they do NOT want you to climb it – so please don’t! I am ashamed to say the first time I was here in 98 I didn’t know much and our guide just told us to climb if we wanted to and not much else – so I climbed it. I didn’t this time of course, it is the equivalent of someone climbing around on Christian churches for example. I reckon they should close the climb completely but I guess people would do it anyway and I guess it may hurt tourism here as well. For me the sunset is the best way to experience Uluru. The changing colour of light and complete tranquility (I walk away from the crowds) as I watch the sun set on Uluru is my favourite experience at Uluru (did it 4 days in a row, one night from a helicopter, I really want my own helicopter!).

At sunset from the air: The Anangu people named it Kata Tjuta which means “many heads”. Where as Uluru is one big monolith Kata Tjuta is many domes and is about 50 kilometers from Uluru. The tallest domes of Kata Tjuta stand more than 500 meters tall! Kata Tjuta is very impressive both from a distance but certainly also up close! The Valley of The Winds walk is 7.4 kilometers up and down rocks and is a phenomenal experience. This must be Mars (with trees) and I shot some fantastic panoramas here that I haven’t had time to stitch yet (takes a while on a laptop!). Here’s a fave shot of mine that shows you Kata Tjuta from Valley of The Winds walk: The sum of my “Mars” visit

I had 4 spectacular days in the red centre, did almost every possible tour with Uluru Express (big recommendation from me if you wanna explore on your own and just need transportation) and got all the photos I hoped for. I couldn’t have wished for a better Uluru Kata Tjuta experience, everything just worked out perfectly and I am now even more in love with the red central desert.

Weather update – and my current location

What can I say, sorry to depress my Danish mates but it’s sunny and warm every day everywhere I go! Uluru has desert climate with hot days and cold nights. Everyday was the same, 30 degrees and a burning sun from a clear sky during the day, 8-9 degrees at sunrise and late at night. I’ve been here in January (summer) as well and it was unbelievable – at least 40 during the day with winds that were superhot and walks like Valley of the Winds gets closed cos it’s way too hot and too dangerous. You can die from dehydration in 1-2 hours in Summer! So this time of the year is recommended, the sunrises are freezing cold but when the sun warms everything up it’s just perfect.

I’m now in Cairns, tropical North Queensland and back to tropical climate – although nowhere near as hot as Darwin. Only about 27 today and 17 at night, sunny with a few clouds. I actually walked around in jeans today, 27 felt cold to me 😀 I’ll be back soon with stories of tropical reef, rainforest, islands and beaches (actually looking forward to relaxing a bit, I seem to be doing so much I almost run out of time to relax).

2 Comments on “Amazing days at Uluru and Kata Tjutu”