Lazy Days. Holiday mode. I don’t usually allow myself much time to relax while travelling (must shoot photos. Will die if I don’t. Eternally Restless) but have been forced into lazy holiday mode. I am now in Broome, Western Australia, a small but popular outback town where relaxation in 34 degree perfect sunny days is not too bad at all. Why am I forced into holiday mode? My own stupidity!

Last week, walking down the street to Cable Beach with my head in the clouds as usual – I have a real problem with not looking where I am going – I am actually studying the beautiful clouds thinking this will be a stunner of a sunset. Up comes the big heavy Detour sign (ironic isn’t it). Now, I pay this no attention at all but simply hammer my left foot (just wearing a thong or flip-flops as some people know them) full force into the sign. I fall forward. I get my head out of the clouds just in time to brace the fall. At which point the tripod, in the tripod holder on my camera backpack, slides forward at great speed, comes to a full stop when it collides the stationary object that is my head and proceeds to tattoo a Gitzo logo in the back of my skull. Ouch. I now lie in the red dirt. I take a few seconds to gather myself and wonder what hurts the most, my foot, my head or my dignity. I choose all 3 but the following day reveals two toes on my left foot commands attention. Nothing broken but very severely sprained and coloured like a rainbow. Can almost not bloody walk at all, left foot now 2 sizes larger than right foot. Need to use tripod as a crutch and generally look ridiculous as I limp around Broome with yet another bump in my head and an Elephant’s foot.

It is a big disappointment, but somehow lucky that the All Terrrain Photo tour was cancelled (didn’t get enough bookings). I would need a wheel chair for that. So, all original plans are off, and can’t walk, need new plans! I had such amazing light in Namibia, I think I used up my luck for a while. I may go up the Gibb River Road next week after some more recovery. Also need to adjust to a new leg of this tour as Namibia was such an incredible experience, I can’t really get over that it had to end at some point. My desert, where are thou now?

Well, I have managed to get around and shoot some in Broome, Cable Beach, Town Beach, Gantheaume Point, Reddell Beach etc. Decided I could at least build up a good stock library of Broome images. It is not art, but stock images are nice, they usually pay the bills so we can afford to shoot art. Here’s a few of my Broome stock images:

Sunset on Cable Beach. Managed to find a bit of sand dunes with ripples on Cable Beach! Not quite the Namib, but it’s sand! Crazy sky is smoke from bush fires lit up by the setting sun. 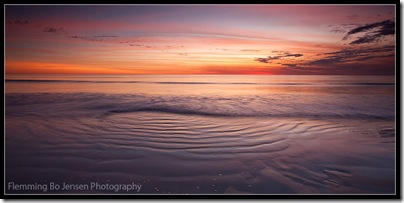 Surreal water- and cloudscape – Cable Beach at dusk. Shot roughly one hour after my little accident. The colours at dusk in the tropics can sometimes be simply ridiculous. Like, you look at it and think, how is that possible in nature? I attempted to create a slightly abstract surreal look here. Water and a beach is clearly not my element, I don’t really know how to shoot it and I’m not very good at stitching wave shots. Earth is my element!

The famous Broome ‘Staircase to the moon’.

It is the full moon reflected into the mud banks at low tide. Only happens of course when there’s a full moon (duh) and a low tide as the moon rises so the exposed water on the mud banks can reflect the light. In every shop in Broome you can buy photos, canvas, postcards etc. of the Staircase to the Moon. I needed my shot as well, even though it is impossible to create anything that doesn’t look like all the other images of this. In the image on the left, I chose to blend two exposures, one for the moon, one for the foreground as I wanted more detail in the foreground than you usually see. Also, even though I had seen a thousand images of this it really was quite special to witness this as it really is good fun and a bit of magic. Locals told me it was the best in years, so a bit of luck I still have left. I also had heaps of fun explaining moon photography to a crowd of many who noticed tripod and gear etc. The moon itself is actually super bright (it is reflected sunlight, like daylight!) so shoot it almost like it was daylight!

12 Comments on “On Broome Time and oh the stupidity.”