Nature never ceases to amaze me. No matter how many days, nights, sunrises and sunsets I experience, Mother Nature always comes up with something new. It is one of the reasons I love landscape photography so much. Trying to capture these short moments of magic that most people never see, never experience, never even notice. I can think of no greater thing to point my camera at than Nature itself. We pale in comparison.

I previously mentioned that the laws of physics seemed warped in Namibia. The clear desert air removed all filters, we had pure 100% Nature. That horizon seemed to always be at infinity. That sky was twice as tall as anything else. After shooting in the desert we would be driving home through the gravel desert. Driving West towards the coast and Swakopmund we were going straight into the most striking fiery red and orange post-dusk light in a banner on the horizon. Not dusk really, but post-dusk, a good 30-40 minutes after sunset. In every other direction no light existed, except for a million stars like diamonds in the sky. To the right perhaps the moon. And always to the left, our trusty night sky companion – The Southern Cross. One time we just had to stop, kill the engine, get out and stare into the universe. Stare back into time. No words can describe it, no camera can capture it. You have to be there.

I have attempted to capture some of Nature’s work. They are not necessarily art, but are simply attempts to document Nature warping the laws of physics! 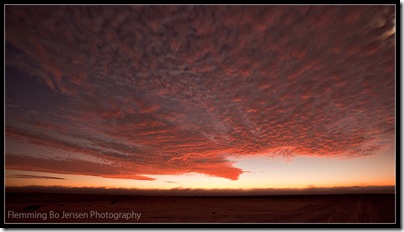 Glowing night clouds in Namibia. This is not dusk light. The sunset lit up the clouds, then they went dark. Then dusk light lit up the clouds, then they went dark. But then…they lit up again! On fire. It was pitch black except for these night clouds on fire. I stared in disbelief, finally had to get out and try and document this. It was pitch black, couldn’t see the camera. It was also blowing a gale. It is a 10 second exposure, iso400, f/6.3 – tells you how little light there was. Live view on my camera gave up, was just blackness. Couldn’t see much in viewfinder so I just pointed. And got this. Night clouds on fire. White part in top right corner is the moon, shame I didn’t get that. The ‘frozen wave’ on the horizon is the infamous mist/fog coming in to swallow the coast and Swakopmund!

Dusk lighting up the atmosphere in the Namib gravel Desert, opposite direction of the setting sun. The blue line is actually the earth’s shadow, it is blocking the dusk light from hitting air particles in the lower part of the sky – hence the pink/blue banners. I have seen this many times before but never so clear, so colourful as in the desert! Desert makes everything clearer. 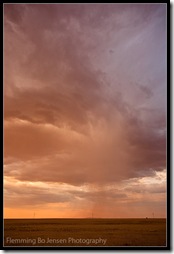 Rain cloud in the Namib Desert, you can see where it touches the ground. Most rain in the desert never hits the ground, it evaporates long time before that. This is a rain cloud that gave us a few hundred drops of water in the middle of the desert for about two minutes. Just enough to register some drops on the windscreen. We experienced rain in the desert! When locals tell you “we had 15 centimeters of rain” that means that they measured the distance between the rain drops and they were 15cm apart!

And lastly, a sunset from Cable Beach in Australia where Mother Nature really turned on all the party lights and just lit up every cloud! She also kindly arranged a low tide so I could get mega reflections. I have a stitched 180 degree pano of this coming up, actually for a full 360 degrees the sky was on fire. A 5 minute demonstration of power, of Mother Nature having a party!

The camera’s we use nowadays are incredibly advanced hi-tech tools. Yet I always feel I am holding the equivalent of a stone age tool when Nature flexes it’s muscles. Nothing can capture that. Will not ever keep me from trying though! Won’t keep me from having my head in the clouds, walking into things!
I am a Nature Junkie!