“It’s caught me in it’s spotlight. It’s alright it’s alright the moonlight”. A Thin Lizzy hit although I tend to better remember the great Smashing Pumpkins cover. Be thankful that my new version – Shooting in the Moonlight – only exists by my pen (well keyboard) not my voice!

Shooting images in the Moonlight lit only by a full moon is something I wanted to do for a while. You have to get away from most light pollution (cities etc) and find yourself somewhere nice and dark so you can capture a glorious night sky featuring magical stars and a nice moonlit landscape. In April I found myself camping in the Namibian Veld (Afrikaans for bush) on a night with a full moon and wanted to experiment with Shooting in the Moonlight. This is basically what I ended up with after a few tests: 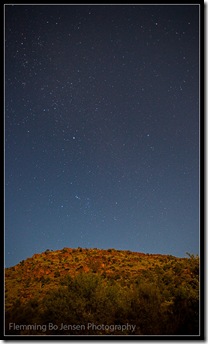 This is in pitch darkness lit entirely by the moon. The image itself is fairly boring but it serves as an example of how a full moon can easily light up a landscape and create a great otherworldly light along with a massive amount of beautiful stars! This image was a 25 second exposure at f/4.0 iso 1250, a full moon is bright but not exactly the burning midday sun. You do need very long exposures and high iso to capture this. A 25 second exposure is too much actually, the earth has already rotated enough to create small star trails, so a faster lens would come in very handy here.

Now that I look at the image I really should have walked up the hill and put some nice rocks close up in the foreground! My mind was frozen as it gets so cold in the veld after sunset. Ah, always great things to learn and improve on. Come next opportunity I hope to have a winning moonlit shot to show you or at least an improved one! Anyone wishing to share some moonlit shooting experiences, please do comment. Take me out to the black!

Moonlit video: For some out of this world time lapse images featuring magical stars and light, this brilliant video by Tom @ Timescapes is pure genius.

14 Comments on “Dancing in the Moonlight”