It has been a wonderful week of photography and I have been especially lucky with the light and weather. I was at Grand Canyon just as a snow storm hit. As the 3 hour storm moved on, the sun returned and the light was most special, the otherworldly storm sunlight that I love. Two days later I captured sunlight beams in the famous ‘slot canyons’ of Antelope Canyon and I caught a nice sunset at Horseshoe Bend. I spent several days at one of my dream locations, Monument Valley and the sunrise especially was fantastic but also the storm clouds the next day was something to see. On the way to Moab, Utah I experienced the great pueblo ruins ‘House on Fire’ in Mule Canyon. Then on to Arches and Canyonlands National Park, I knew little of them but they really delivered. Canyonlands is more impressive than Grand Canyon I reckon and on both days I had fantastic clouds due to snow storms. A week of wonders and the landscape here in the southwest US is simply stunning.

The weather changes so rapidly up here in Northern Arizona and in Utah. I sunbaked one day lying on some very hot rocks and two days later I chased snowstorms in Arches National Park! Today’s image is that snowstorm, the clouds were massive and gorgeous and sandstone works so well in this sort of light. Here’s a little teaser, larger stitched panorama to come: 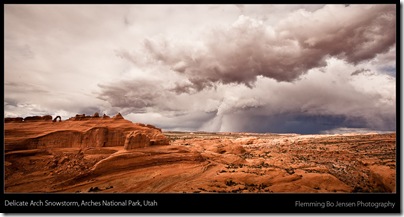 My perfect weather would be a hot tropical climate with Australian outback clouds (you know them when you see them) for sunrise. Followed by a clear sky for sun worshipping all day long! Then, energized by the sun, I should like a storm front to move in with some otherworldly light and dramatic clouds. Keep the sun exposed though so it can light up the clouds at sunset. Then, post dusk, clear the sky again for some star trail shots and keep the temperature warm all night for nighttime shooting under a full moon. Too much to ask?

Having chased snow storms for two days in Arches and Canyonlands I had my shots and could take the cold no longer. There was frost on my car this morning, now that does not work for me! So I have moved south again, to Lake Powell in Page, Arizona, where it is warmer. Bryce Canyon, Death Valley, Yosemite etc. coming up! I look forward to Death Valley, my kind of place and my kind of temperature.

16 Comments on “Week of Wonders”