I am wearing a hard hat and a fluorescent orange vest. Have I either travelled back in time to a 90s trance party or was my attempt to resurrect the village people successful?

The answer is I am simply wearing the appropriate costume for capturing time lapse of a 30 meter catamaran. I worked for my good friend True North Mark capturing timelapse for his boat building company Evolution Commercial. Evolution was doing a 3 week re-fit on a large catamaran and wanted to showcase how Evolution makes the impossible possible by elegantly moving a large catamaran to their yard. This is the resulting movie, 3 weeks work in a few minutes:

Most of the timelapse, save one scene, was captured by yours truly. The video was edited by Michael Fletcher. Part of the movie is captured on a Nikon D300 using the built-in intervalometer (nice feature on the Nikons!), the rest is captured on a Canon 5D Mk II using the extertnal Canon intervalometer. I managed clean flicker free timelapse images using a “detach lens” trick I learned from Michael Fletcher (thanks for the help mate). Flicker is created from the aperture not being 100% perfect every time the lens is closed down meaning very slight differences in exposure. This becomes flicker when a string of single images are shown rapidly as in a time lapse. To permanently lock aperture, you hold down the DOF preview button, this closes the aperture in the lens to the aperture you have set on the camera. You then detach the lens about half a millimeter until the aperture reading on the camera reads 00. The lens has in effect become a manual lens. You have to be very precise, detach the lens too much and you will get an error when trying to shoot.

A snapshot of the setup with Nikon D300 and Canon 5D Mk II: 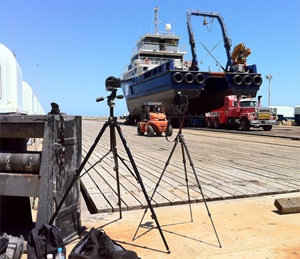 Timelapse-ing leaves you with plenty of waiting time so I brought a book, and also had fun creating a bit of art out of the work. Here’s a very smogranch inspired catamaran image as I was studying smogranch magazine while shooting. EDIT: It is of course most and foremost a Charlene Winfred inspired image, from her Tugboat Dreaming image! I was even thinking of that image as I captured this: 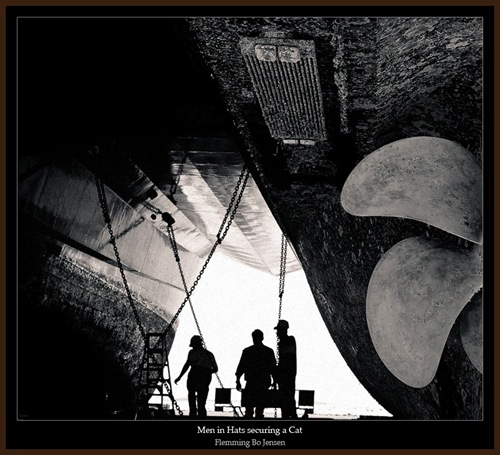 It was a fun shoot and impressive to see Evolution Commercial at work; I am very happy with the resulting footage.

PS. Mental note: when timelapse-ing for 8 hours in under the Australian sun, bring a book (I did) and sunscreen (I forgot = baked).