One of the ever present tiny taxis of Cusco, Peru, takes me to the Coliseo de Gallos. The driver is chatty and although I miss half the words due to my basic Spanish and the noise from the engine threatening to blow up, we have a fine conversation. He is excited to be bringing a gringo to the event. Wants to know if I enjoy them, the fights, the betting, the action. “No se amigo” — I would not know, this is my first!

Six soles and a hasta lluego later, I have arrived. I look for el boletero, where do I buy my ticket? Confounded, I look at others and reverse engineer. A tiny hole in the wall, not much bigger than my hand, holds the secret to getting in. 30 soles and a ticket are exchanged. All I see is a hand, I wonder what is at the other end. I forget about my stomach ache and my cold and excitedly enter the Coliseo. The coliseum houses a famous and infamous Peruvian tradition – cockfights.

It appears to be a quiet day, the coliseum is barely half full. It is an overcast cold Summer day. Still, the air is filled with anticipation, laughter and a thirst for action (and Cusqueña cervesas). I am the only gringo, I circle and become familiar with the place, the people, the action. I capture a few images on the edge, easing my way in. A fight is about to start. The roosters are fitted with the long sharp silvery spurs. “Izquierda”, “derecho”. Bets are made on the left or right side rooster. The tension builds. I ask for permission to enter the arena and shoot the preparations, am granted a “si si amigo” with a friendly smile and waved into the arena. Everyone reminds me “sin flash sin flash amigo!”. Claro, no problemo. No flash shooting for me, I do not wish to see a rooster in a blinded-by-the-flash freaked out rage chase me around the arena with a silver knife strapped to it’s leg (others might find that idea quite amusing though).

We leave the arena, the fight begins, the roosters circle each other. First fight is non dramatic, the roosters do not want to engage despite much egging on by the crowd and managers. “This was not so bad” I think, not really liking the whole concept of humans making animals fight. Next fight, different story. Rooster Derecho is violently slain dead in 30 seconds by a vicious rooster Izquierda. Crowd is excited. Stunned, I stop shooting. Loco. That was insane, dramatic, violent and bloody. The whole place is insane. And very interesting. Steeped in tradition, culture, violence, betting, life death and anarchy. Loud music is pumped out between the fights. Beer, lots of beer is inhaled. I must keep shooting and pick up the camera again.

The music is muted. Anticipation is high, tension can be tasted in the air. Final bets are made. New fights begin. Working the scene is a joy as it usually is in Peru, everyone allows me to go where I like. And get in close. This is intense, this odd micro cosmos contained within the Coliseo.

Two hours pass quickly, I walk out the gates and re-enter Cusco, insert myself into another tiny taxi, taking me to an Indian restaurant to meet Adam Weintraub and family. Loco. This whole day has been insane. And rather awesome. Started off the day in the Amazon jungle, returned to Cusco, experienced a very Peruvian event, the cockfights, and am now at an Indian restaurant with my Cusco friends. Only in Peru.

Thanks to Adam, Carlos and Maria for the Coliseo de Gallos experience. 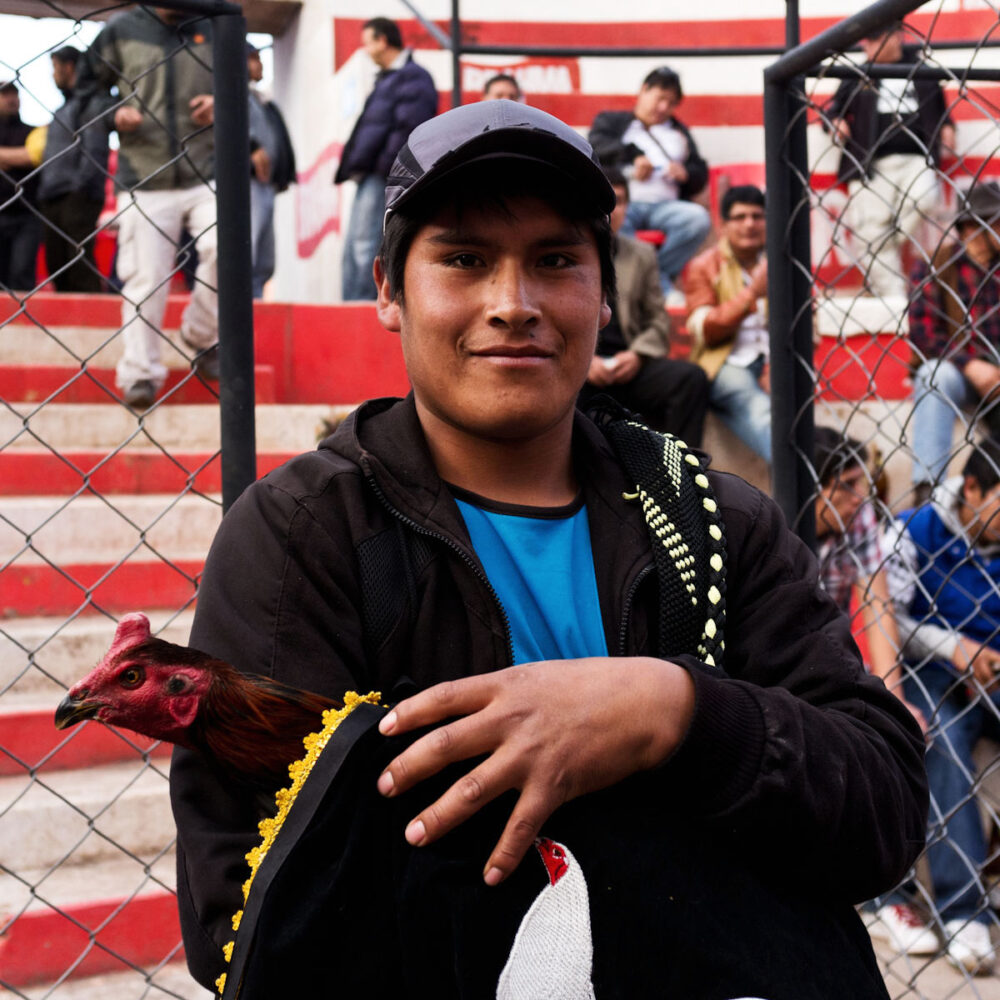 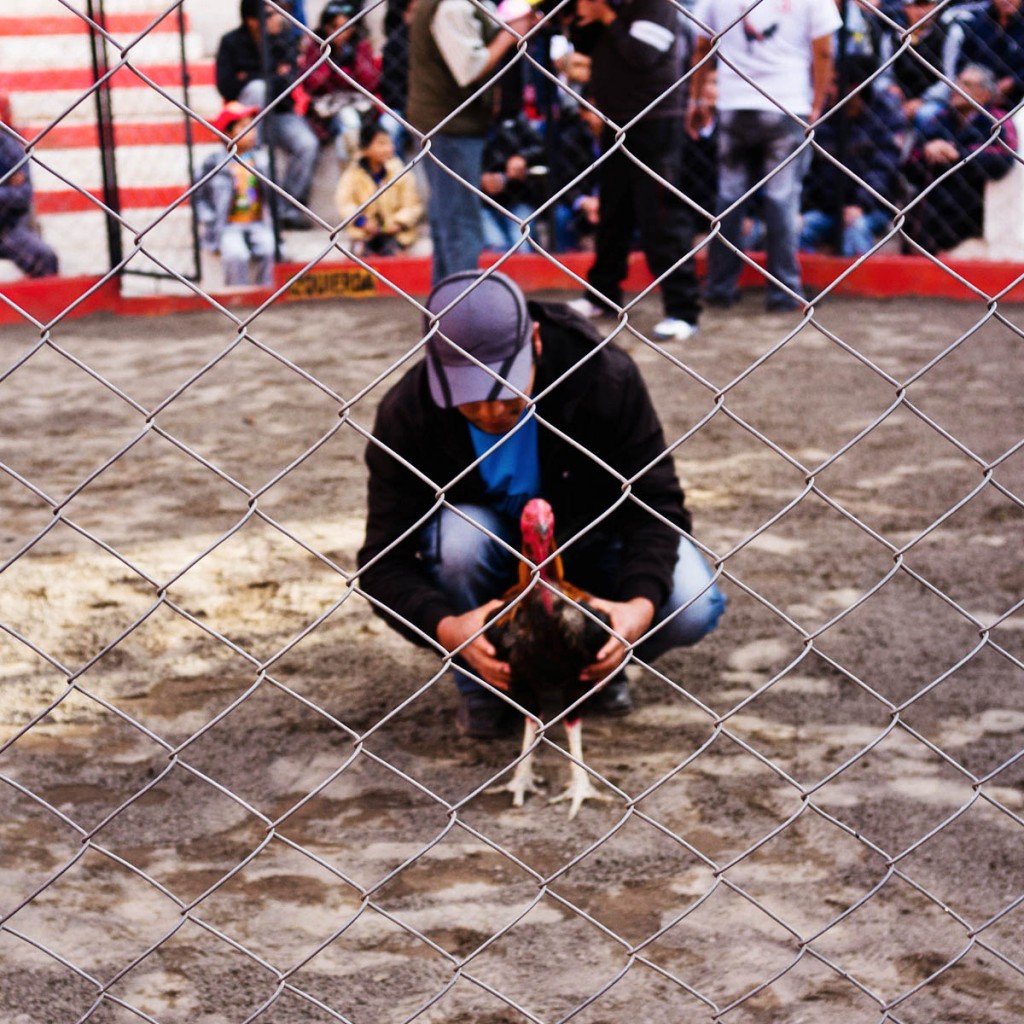 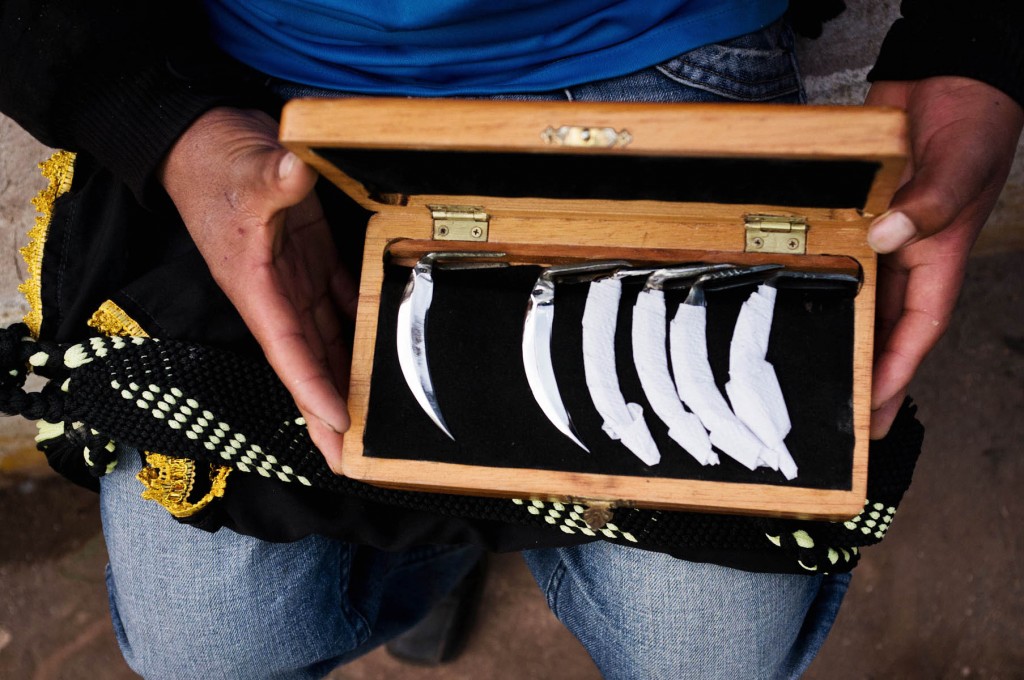 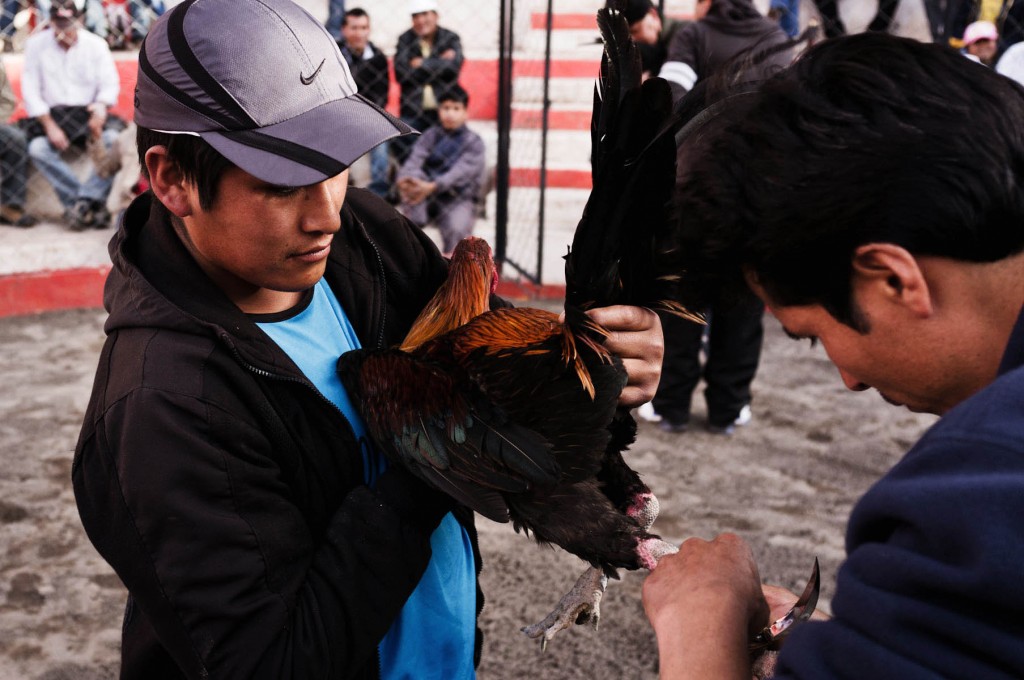 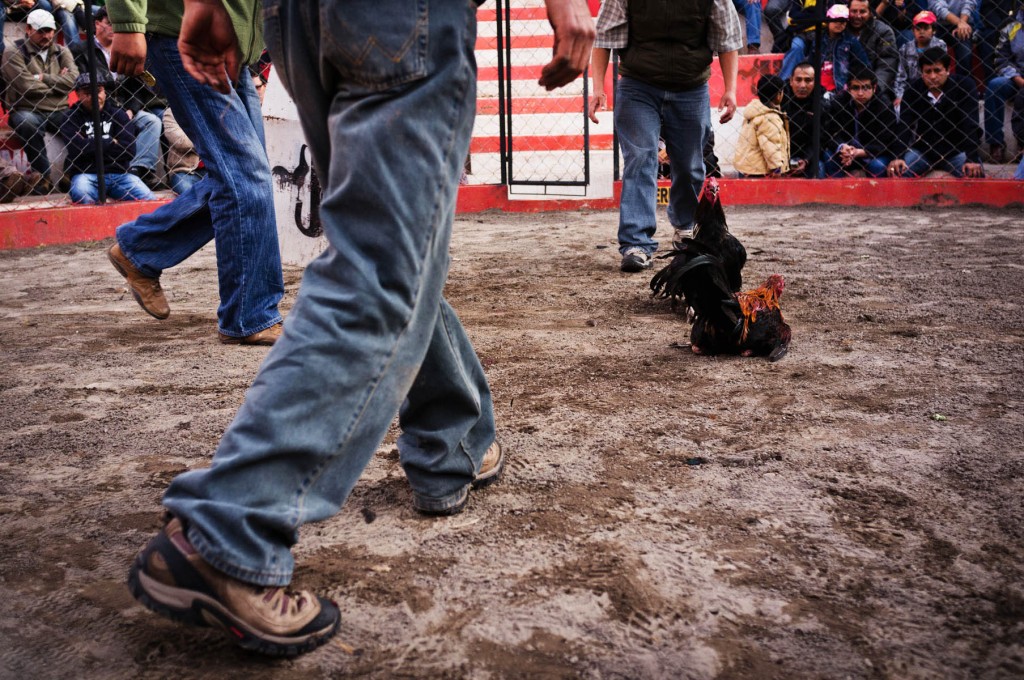 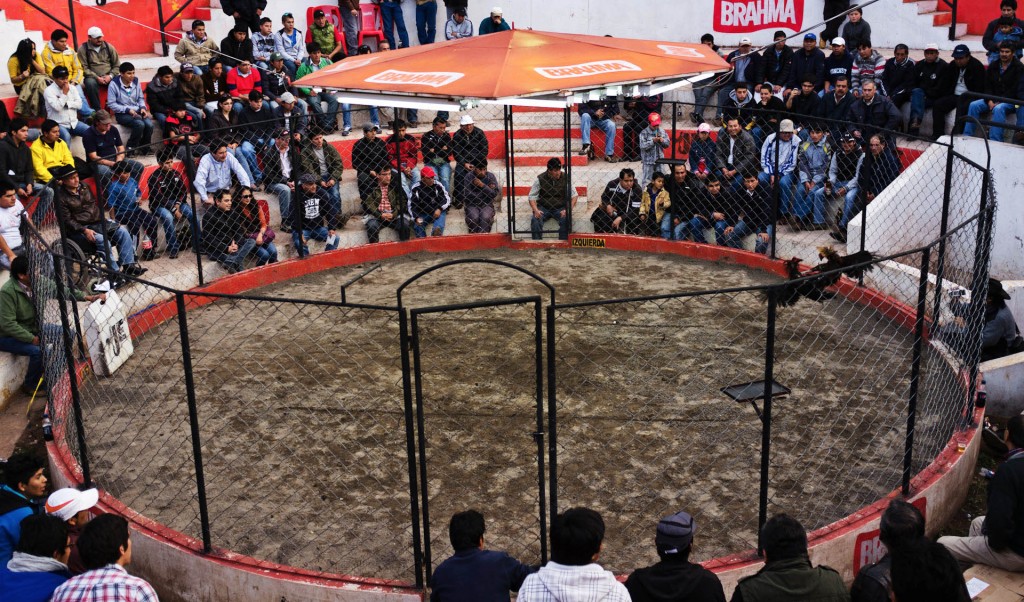 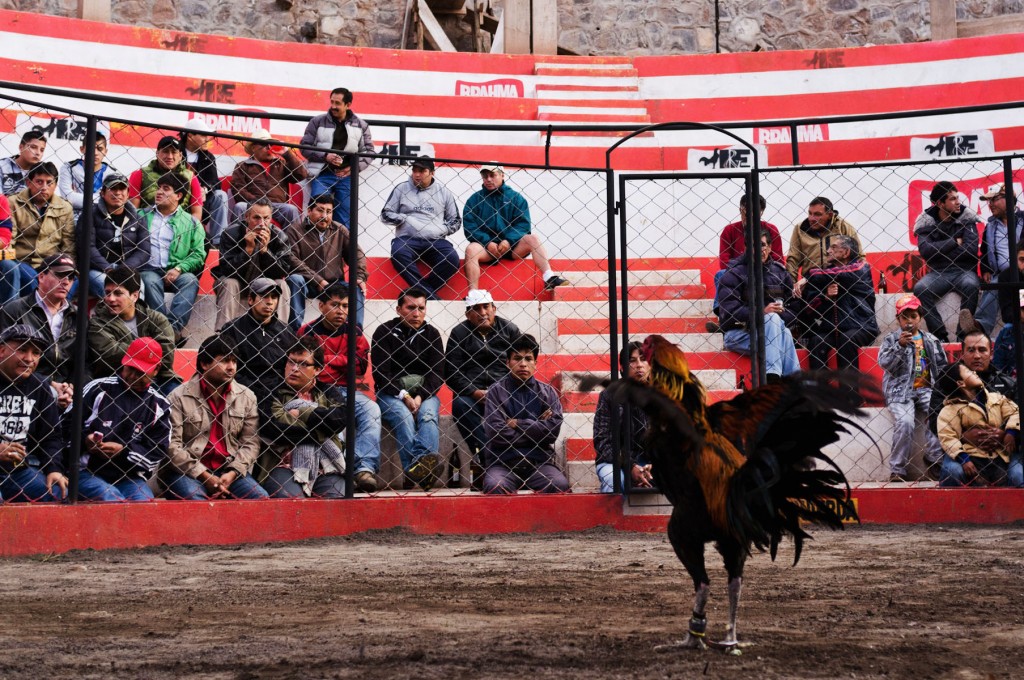 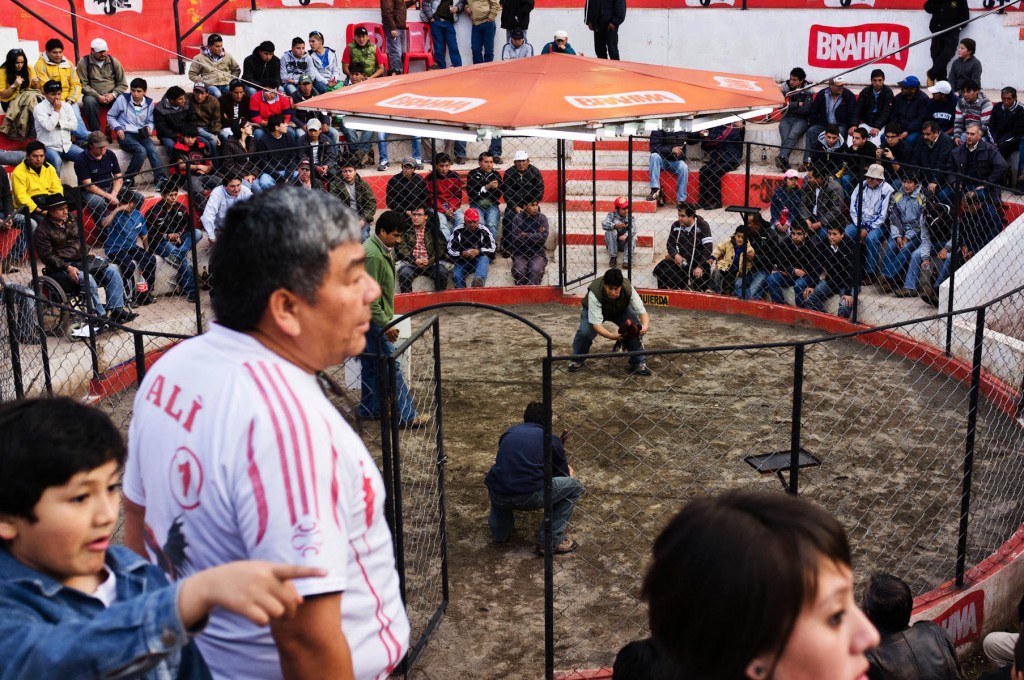