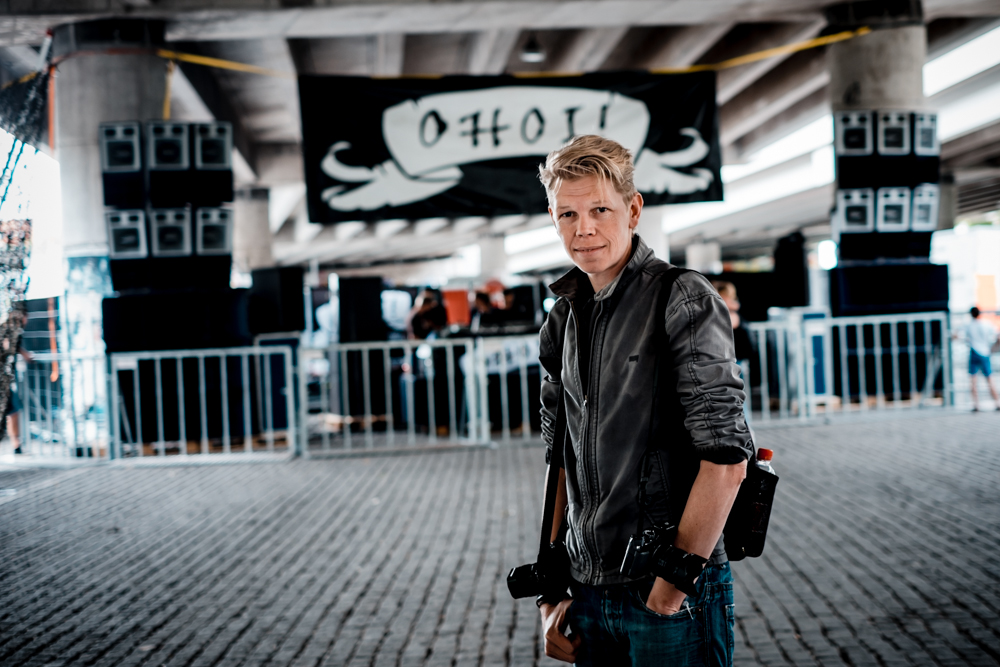 A quiet moment before the beats and bass and work commenced at ‘Bas Under Buen’, Frederiksberg, Copenhagen, July 2014. Picture by Charlene Winfred.

For two years I have been fortunate to work as a commercial music photographer. Having been seriously into music since the age of 11 or 12 it is a dream come true, but it took me a long time to realise I should bring my camera to music events and combine my love of photography and music.

My earliest memories of music was listening to vinyl records (yes, vinyl, google it you youngsters!). My mother played a variety of music during the day at our farm, including lots of 70s disco (Boney M anyone?). I soon started listening to the radio and at some point as a 6-7 year old I became the proud owner of my own cassette player and some childrens audio books. I had a Danish audiobook version of Star Wars that I played over and over to the point of wearing out the tape. It came with a book with pictures and when you had to turn a page to keep up with the audio, R2-D2 would beep-beep on tape. It was quite possible the coolest thing I had ever experienced and my first moment of audio magic.

When I received a ghettoblaster – this was the 80s! – for my birthday I also started making mixtapes by recording songs from the radio. This is a science in itself, as anyone who have ever attempted it knows. Some of you Danes out there will remember Kim Schumacher, I religiously listened to his weekly radio show where he would speed talk and play all the latest tunes he picked up in New York. I also began reading about music in the hippest publications I could get way out in the country, the Danish Vi Unge and the German Bravo magazines. This was before I even spoke much German so I had to use my mothers dictionaries. Bravo always came with these big posters and my room was decorated with Michael Jackson, Duran Duran (yikes!), and the German Nena (yikes!) – and Star Wars, of course. 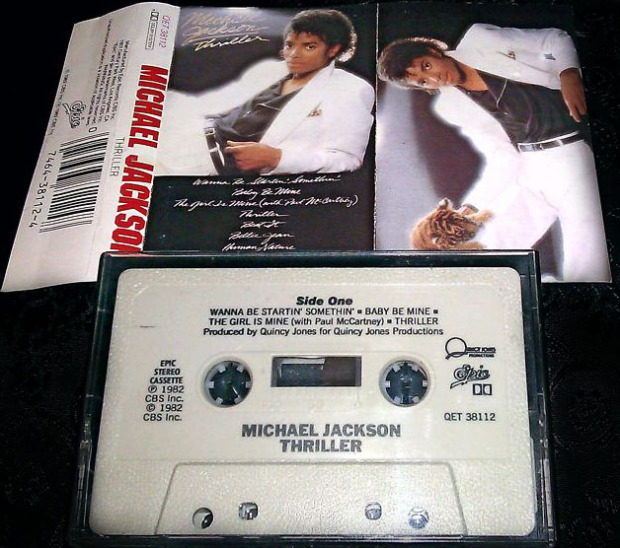 Then one Christmas, probably in 1983, my world changed. One of my presents was Michael Jackson’s Thriller on cassette tape. I sat glued to my ghettoblaster and could not stop playing this over and over and I still can’t, I still get completely entranced by MJs (and Quincy Jones) genius work. This album was and is legendary, no other music means as much to me. More than 30 years later I still listen to this album at least once a week. It is for me the best album ever made and nothing short of actual magic. I still have the cassette tape somewhere in storage. Beats are what first catch my attention and no one makes beats and basslines like MJ, no one. Being a ‘beats man’ the lyrics often gets filtered out by my brain, but this entire album I can sing (really poorly but funny!). I do a version of The Girl is Mine that brings the house down.

Electronic beats in the blood 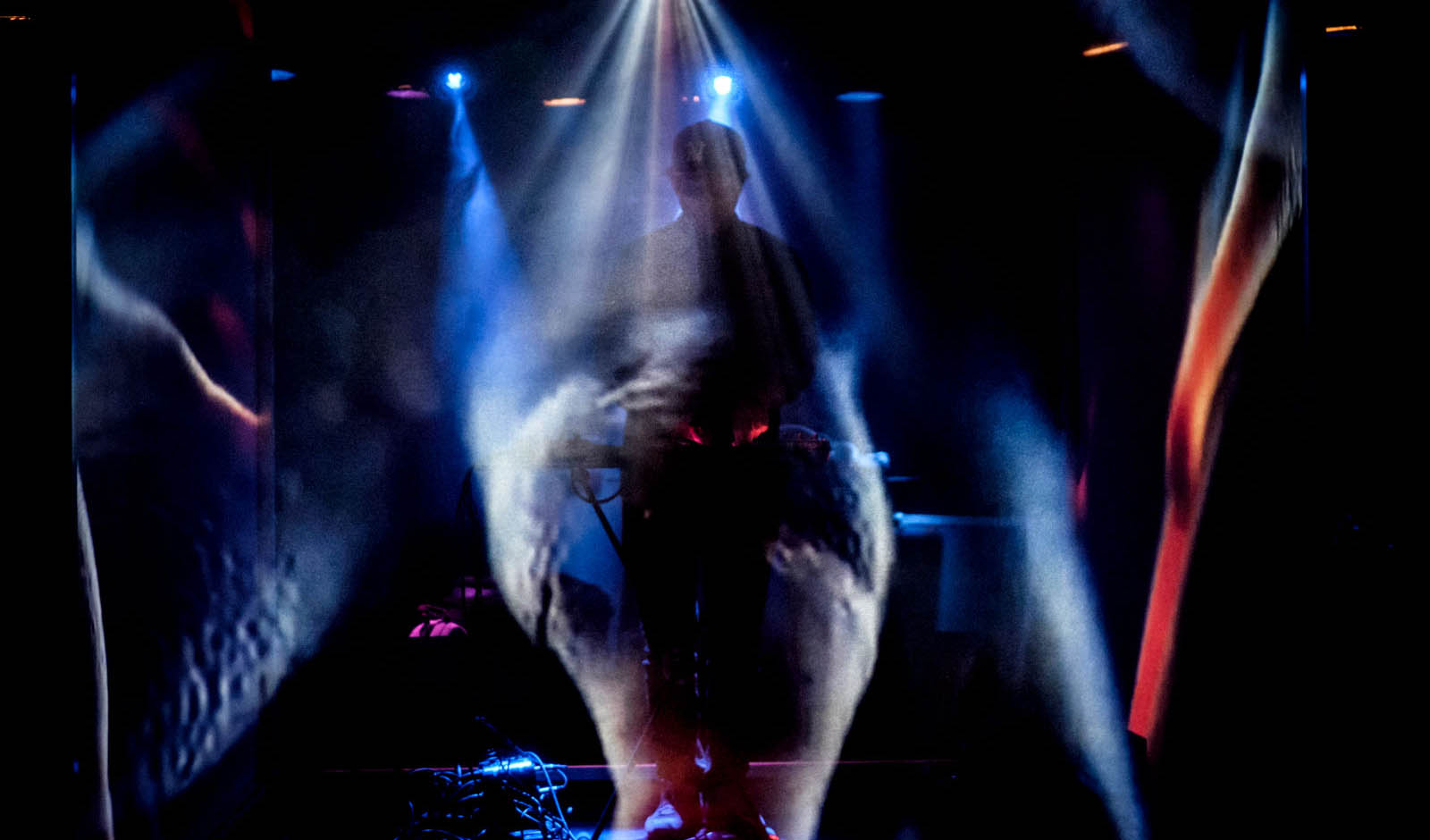 I explored many genres of music over the years growing up. I had my metal years of course as an angry teenager, I had a period where I explored older 70s music, I even had a rock phase believe it or not, and then in the mid 90s my world changed again. Shortly after moving to Copenhagen, electronic music permanently entered my DNA through my ears. My strongest memory is of hearing legendary Future 3 play live at Vegas Vegatronic nights one Saturday evening. The beats, the bass and the complete freedom in the music blew me away. I had never heard anything like it. It was refreshing, the tunes did not bow to any standard form of composition and it was entirely beat and bass driven. It was about moods and often surprising structures. In that respect it shares many similarities with jazz (of which I am not a fan). It was also tribal with repetitive beats, great for dancing, and the scene was filled with people embracing a fresh alternative and freedom, freedom to just be yourself. I was hooked and many a night was spend clubbing in Copenhagen (usually at either Vega or Mantra). Many of the DJs I danced to back then are still around and I have now photographed some of them. 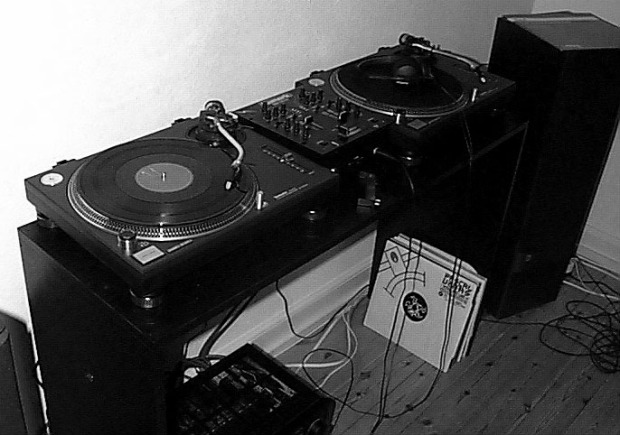 Yes. That was the ‘killer’ DJ name I invented for myself in early 2000. I could not resist anymore, I had to buy myself a pair of Technics 1210s and a cheap Numark mixer. I started collecting vinyl, frequenting legendary Copenhagen record shops such as Street Dance, Baden Baden and Loud and I taught myself how to mix. Yes, the old man here can beat mix on vinyl and one of my mixes even survived and can be found on my mixcloud. It was just a hobby, no different from playing with a guitar in your home and I DJed exclusively to the wall in my flat – but it was great fun and a major stress relief too. When I think back to 2004 I still do not remember quite why I at some point sold my decks, mixer and hundreds of records. Perhaps I had just moved on to other things – one of them was photography.

After many years of listening to music and going to events, and many years of doing photography I still don’t know how I finally put two and two together. But I purposely went to a Dokkedal/Dixen event with my camera and determined to find a new groove I started shooting music. I found a groove. The week after I went to Bas Under Buen for some bass and again brought my camera and made pictures. Soon after that I found myself shooting for Strøm festival 2012 where I made my now somewhat legendary image of DJ Copyflex. I believe in letting my work speak for me and this picture got me noticed back then. 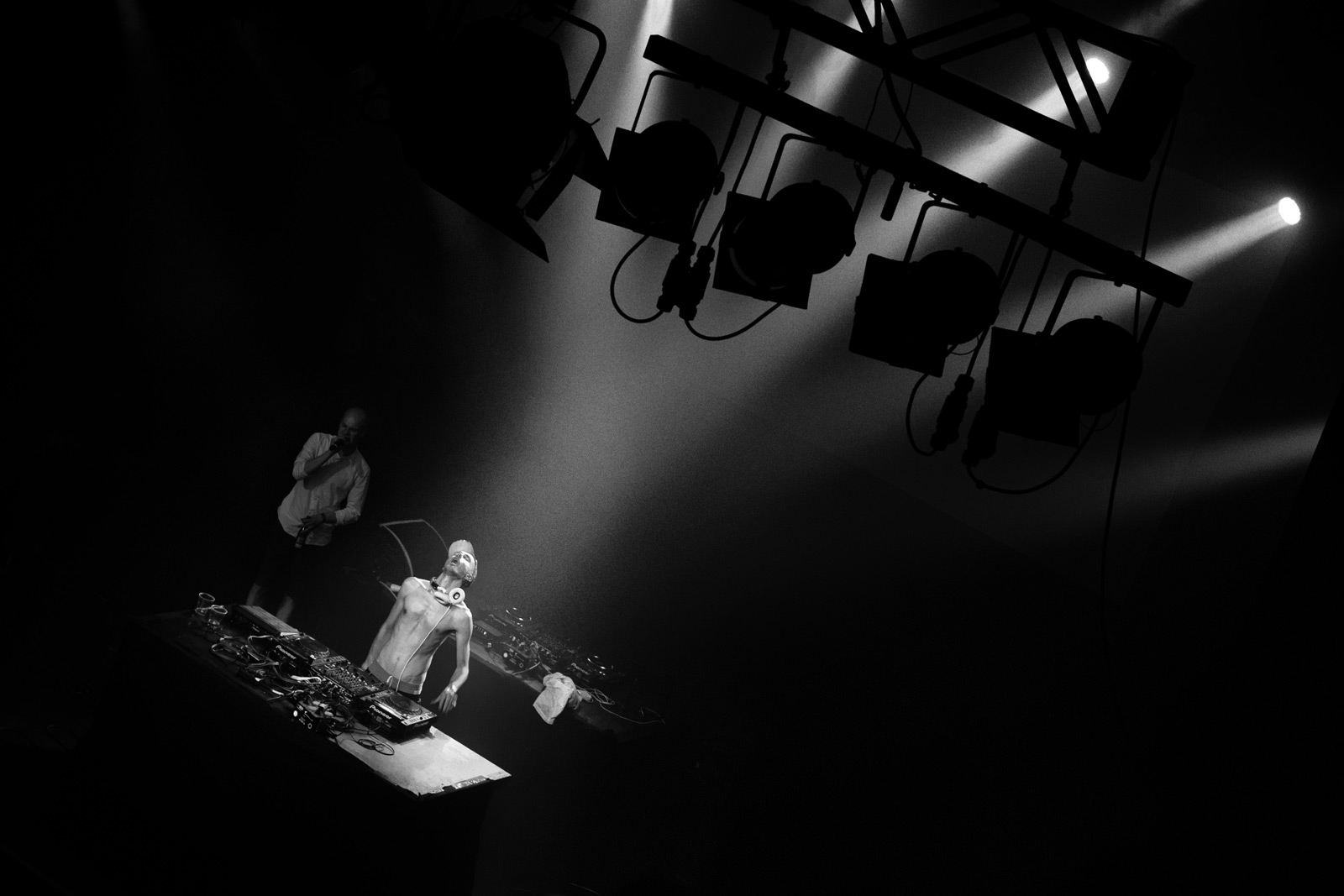 I had indeed found my new groove. The following year, in 2013 I shot as many events and festivals as I possibly could manage to gain experience. I managed 20+ events and festivals over the summer, one of them even turned into a Fuji promotional movie. It was far too many events but I had to make my presence known through my work. A call from Red Bull Studios Copenhagen in June 2013 asking me if I wanted to shoot for them proved another major turning point. It started the best working relationship I have ever had, working with wonderful people at great Red Bull events.

My general experience in photography and understanding of light helped me, when I started shooting music. In music, it’s the beat that I listen to, in photography it is always the light, the epic light, I look for. I tell myself my experience with electronic music helps me. Because, you know, I have been there! Well sort of, I DJed to a wall but I did imagine a crowd of thousands in front of me. So if I was the musician that I now shoot on stage I know how I would like to be portrayed. And I understand the music, I can predict what will happen with the beats, the crowd, the musicians and the stage light. 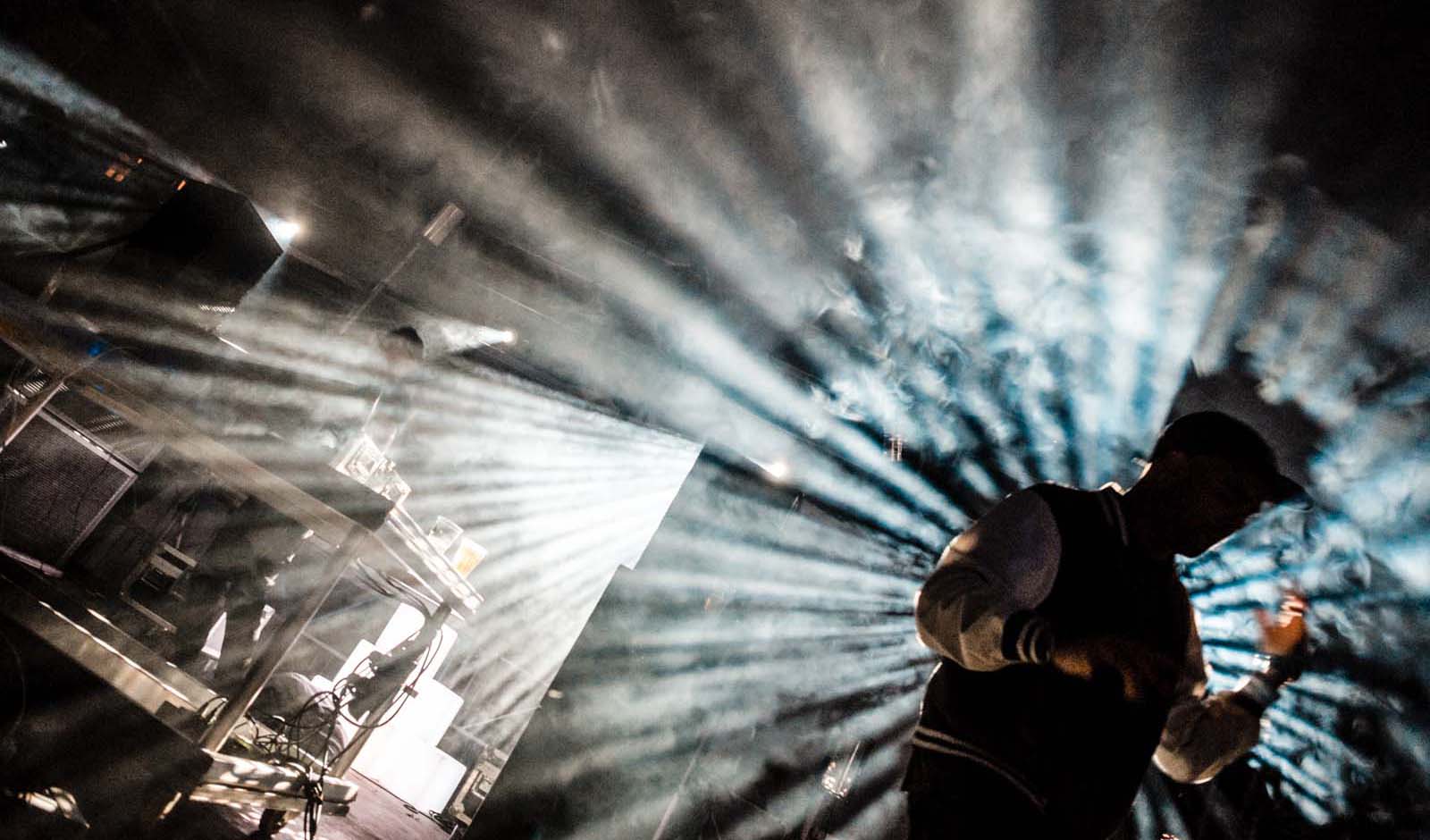 I love being in the music scene, being around music, musicians, sound engineers and all the interesting gear. My job is at times the best in the world, but it is also a lot of hard work and not always fun. It is very depressing to be sitting alone in a mostly empty nightclub at 3am, been there for 5 hours, now almost falling asleep and just waiting for the main act to go on so I can get 10 pictures of them. That makes me want to give it up and never shoot again. But on the good nights where it all comes together it is worth it. If I ever get a ‘rider‘ I shall put in “Main act must go on no later than 2am as the photographer is an old vagabond and needs to sleep”.

Being around all these musicians and wonderful tools, I am immensely inspired to play with music again. I miss my two decks and mixer, not the least because it was such good stress release to just play tunes and mix for hours. One day, when I’m an old man (Michael, shut up!) I have grand plans to built a beach house. I shall have decks and a mixer again and I will subject Charlene to hours of tunes – and rants about why vinyl is better. Fortunately for both of us, we’ll probably be deaf at that time. The dogs won’t like it much though.

On stage, working at Strøm festival 2014. Picture by Charlene Winfred.

I stood on the shoulders of many and received much help and encouragement to get where I am now. I must especially thank Åsmund (DJ Copyflex, Copia Doble Systema, Alo Wala), Frederik (DJ 2000F, Ohoi!, Strøm) and Fergus of Red Bull Studios Copenhagen. And the magic Lady in My life, my P.Y.T., Charlene, for The Way You Make Me Feel (ok, I shall stop naming MJ songs), working alongside me at gigs and coming along on tours, kicking my ass to keep improving and being the best (and hardcore) editor of my work.

Two years, tens of thousands of pictures and many, many gigs later the story almost comes full circle. Future 3 (my entry into electronic music in mid 90s) are back together and recently asked me to shoot press photos for them for their forthcoming album. Unfortunately timing and scheduling issues meant it could not happen, but talking to Thomas Knak of Future 3 about it a few weeks ago brought back wonderful memories and a huge smile on my face.

You can never ever predict how this wonderful, weird, dark and quirky thing called life will turn out. Never ceases to surprise as long as I remember to walk through – or sometimes kick them open – the doors of opportunity in front of me. Two years ago I had only just shot my first music pictures. Now, I do it professionally and can combine music and photography. The dream I did not even know I had, has come true. As Bono once said: Dream out loud. At high volume.

14 Comments on “Dreaming out loud: My journey into music photography”