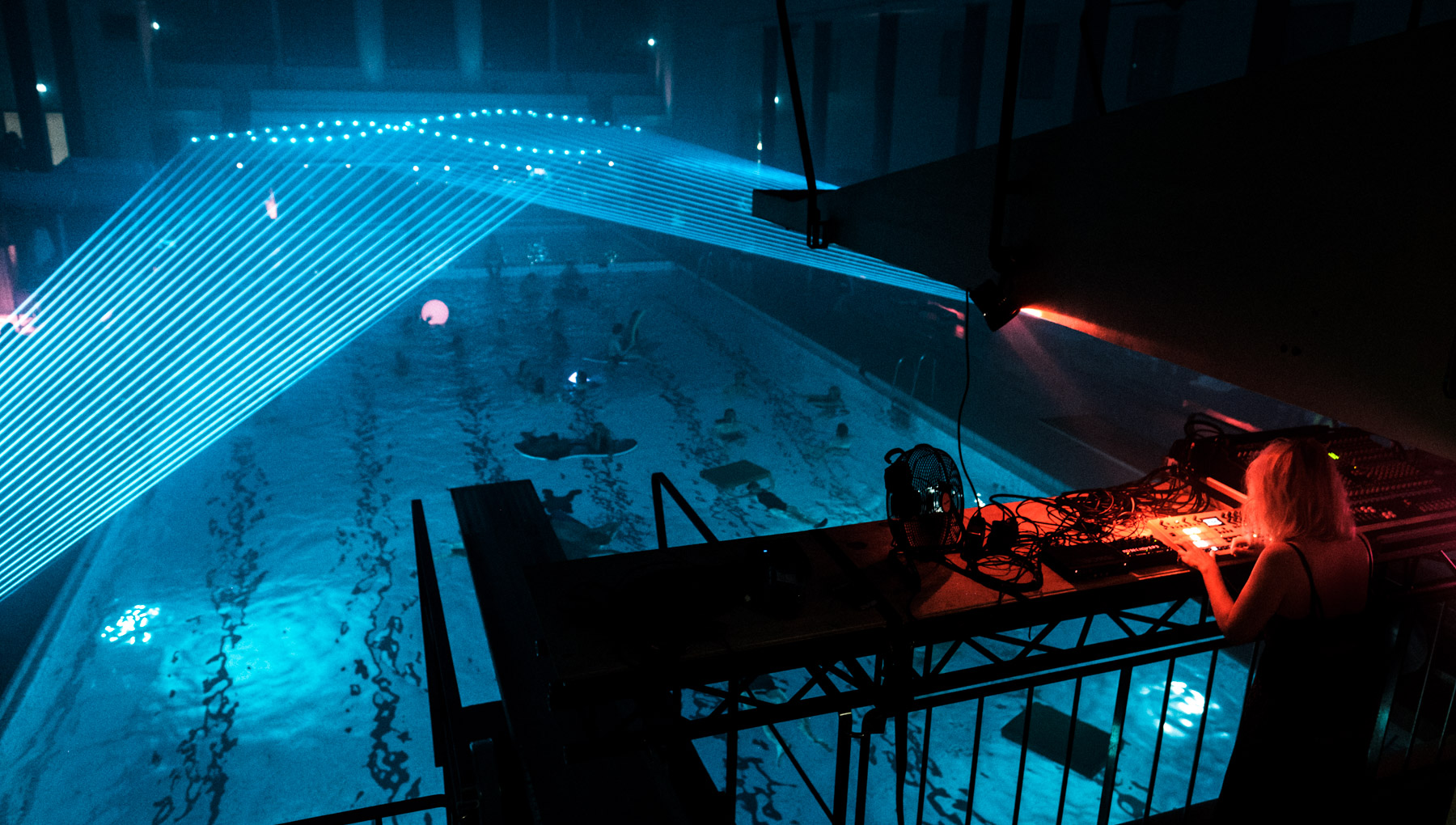 What do you get if you take the Danish Strøm electronic festival,  add composer and sound artist SØS Gunver Ryberg and have her play in a huge indoor swimming pool, and turn off the lights and add massive lasers from Laserfabrikken? Well you get a unique event that blew everyone’s minds!

I can basically best describe the event by having you look at my pictures, while you play Palacelike Timescale of Black by SØS Gunver Ryberg loud on headphones, and to complete the sensory environment you should really be in a very humid 34c degrees warm room! Even better if that room has a swimming pool too. But of course you also need the crazy scifi lasers from Laserfabrikken. That is somewhat what it was like on this fantastic Friday in August 2019 at 11pm during Strøm festival. I have been the photographer for Strøm festival since 2012 and have photographed live concerts on a moving metro train, concerts in a huge underground water aquifer and all sorts of unique events, but this one is so special, definitely in my top 3 of all Strøm events ever.

As it often is when magic strikes, no one knew what would really happen. Then hot and humid environment was so extreme, would the lasers short circuit after 15 minutes? Would all of SØS audio gear even work for 2 hours? She got electric shock from the gear just during rehearsals, everything is humid, everything is conductive. Would it work, sound great, look great, would the crowd love it?

Once we turned off the harsh overhead lights, and SØS started playing and 100 people emerged from the changing rooms and jumped into the pool we all laughed out loud. This was just insane, this was so frigging cool, so otherworldly. Then the lasers came on during hour 2 as Søs switched to harder techno stuff and people were just blown out of this universe, clapping, cheering, splashing around.

At the end, when she finished her set, SØS wanted to join the crowd in the pool, so she kicked off her boots and ran down the stairs from the 3 meter tall diving platform she was playing from. I was next to her and ran after her to get the shot. Now, SØS used to do work as a stuntwoman and she is fast on her feet and ran down the steps and jumped into the pool in a fast smooth motion. I am carrying two cameras and a camera bag and trying to keep up, I really want the shot but really don’t want to end up in the pool too! Mission accomplished but it was a little too close for comfort!

It has taken me far too long to write about this event, I still think of this night as one of the highlights of 2019. Thank you so much to everyone involved, Søs, Mikkel, Johan, Simon, Strøm crew etc. And thank you to Christina Majcher for that fantastic article in Weekendavisen, where my photos were used and displayed very nicely in the print version. See the last picture in this series. Enjoy!

PS. It should have been obvious to me, having spent a lot of time in the tropics but…I still did not think to bring shorts or a change of clothing for after the show. I was mega sweaty after this event and had to ride my bike to the next Strøm event! Village Idiot I tell you! 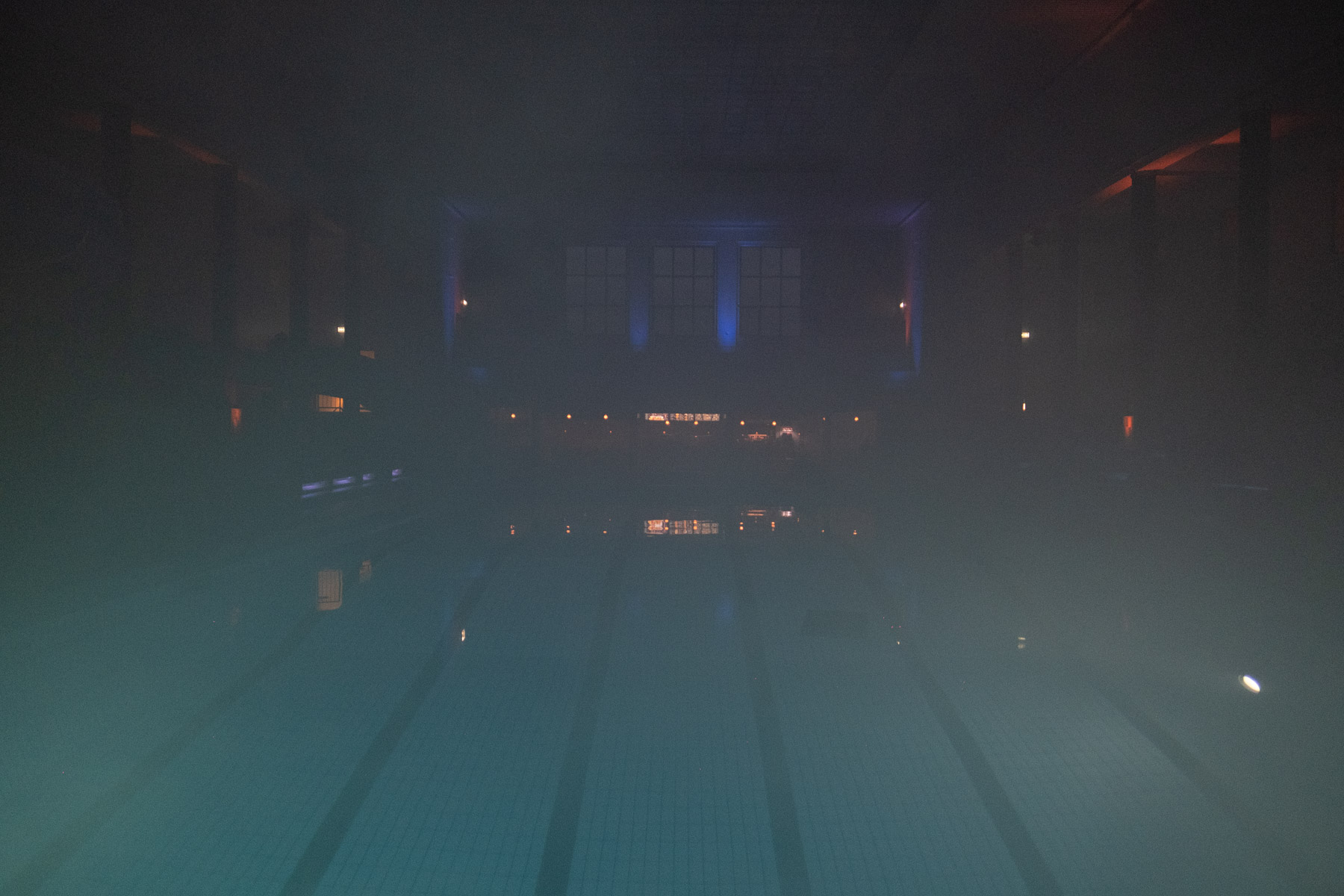 Just before the event starts and the haze and humidity is somewhat thick by now! Perfect for the laser show! 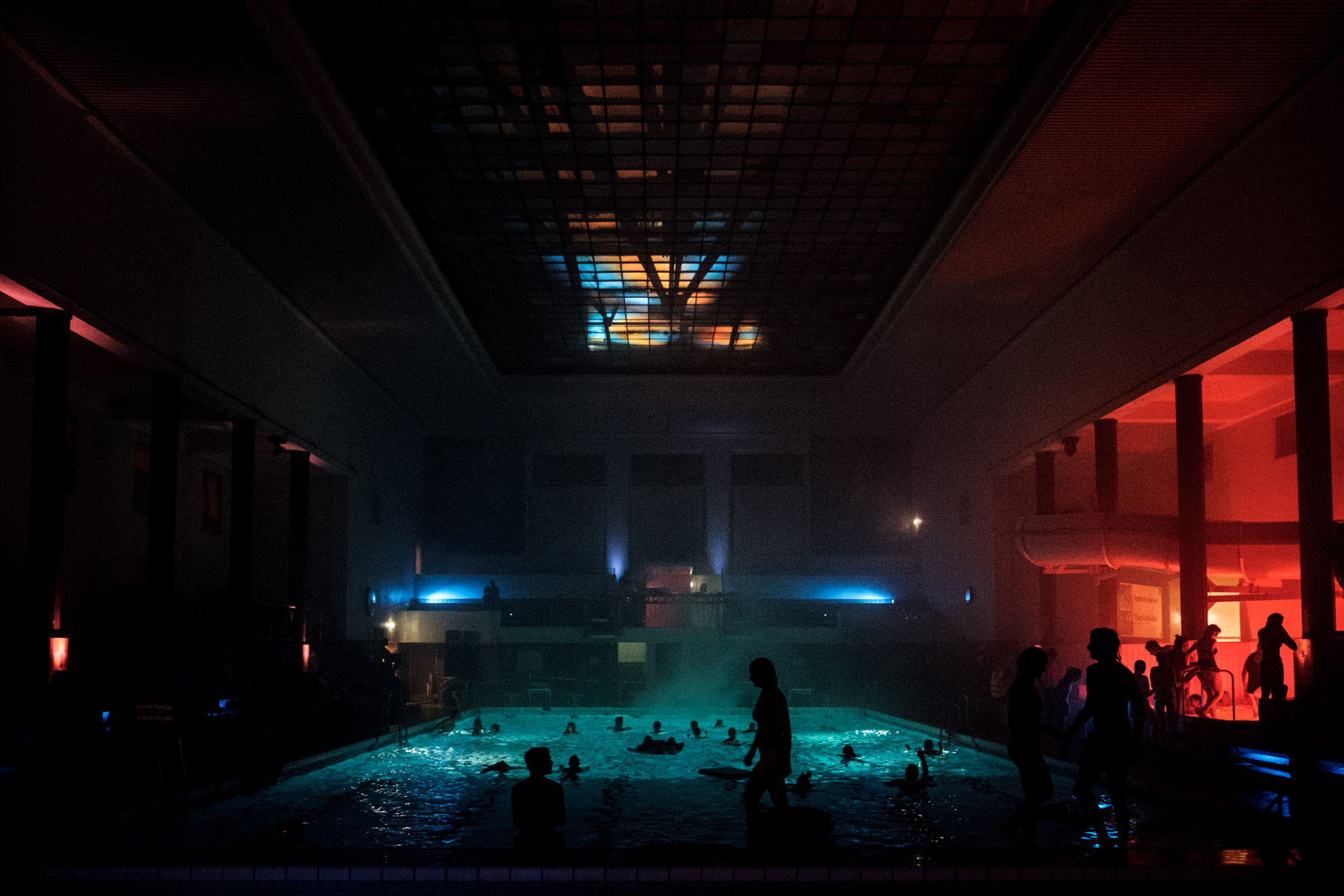 The first hour SØS played an ambient set, and the mood was very gorgeously moody and relaxed. 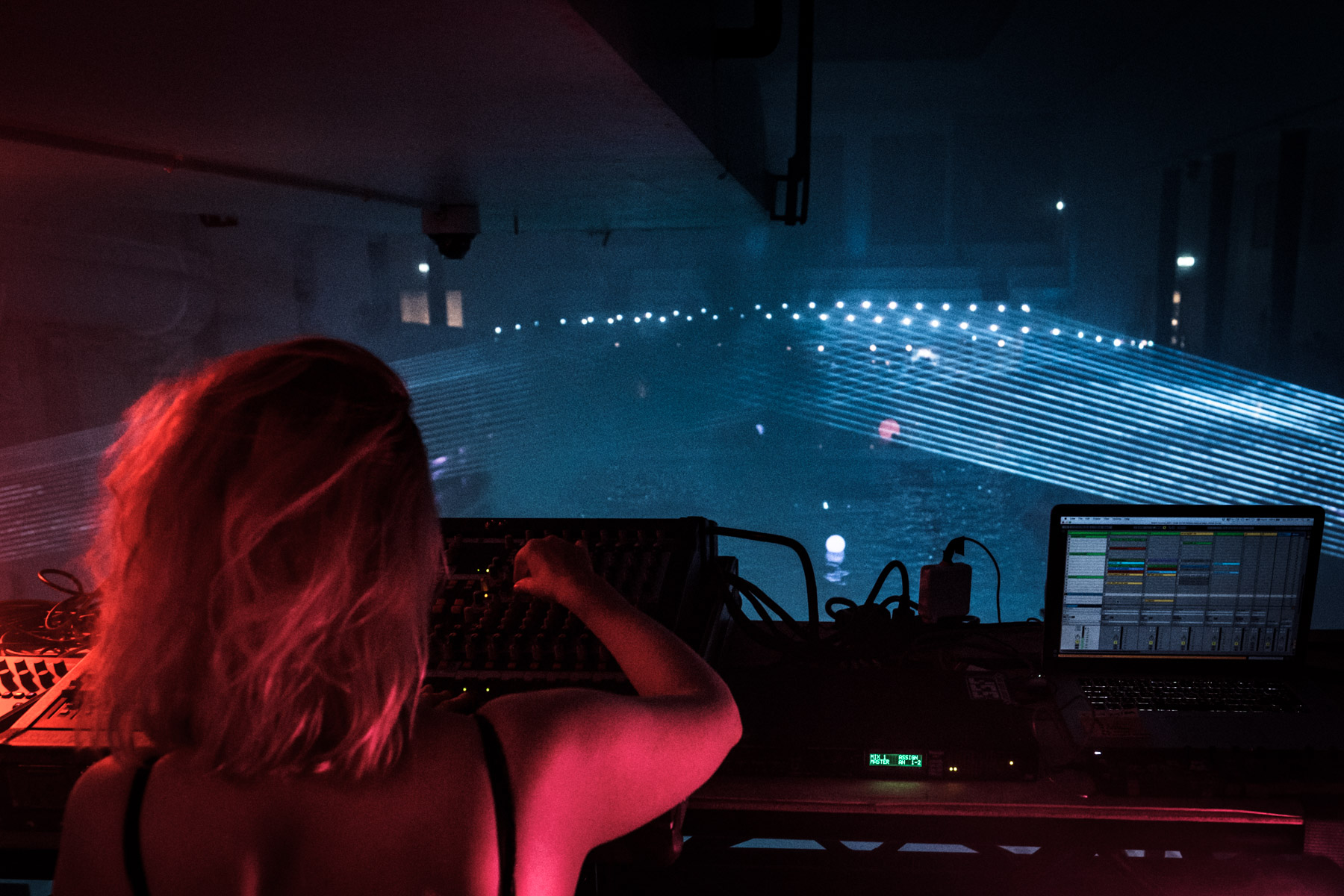 After one hour of ambient SØS kicked in the kick drum and Mikkel kicked in the lasers! People were so blown away they cheered loudly and thrashed the water around and clapped. 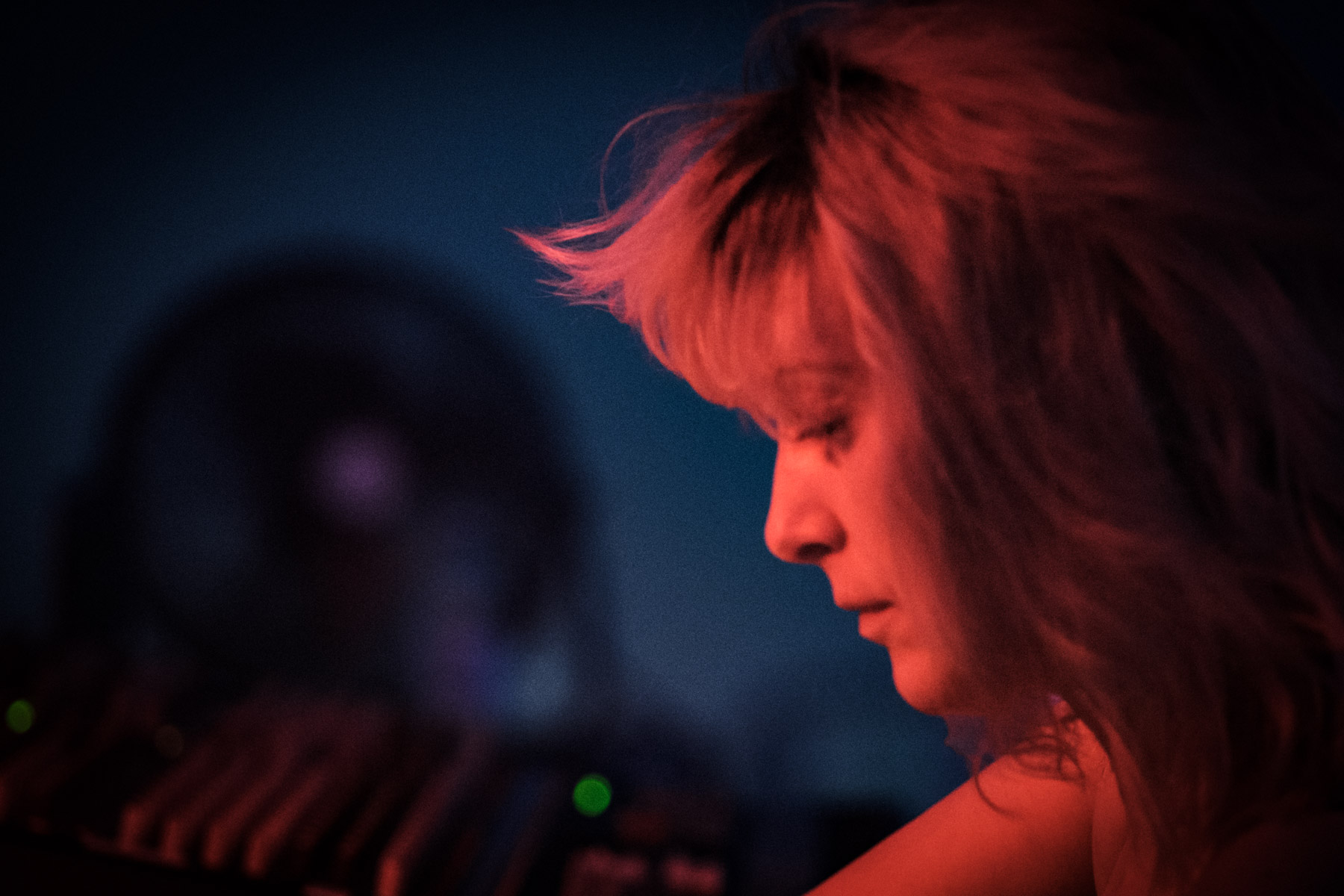 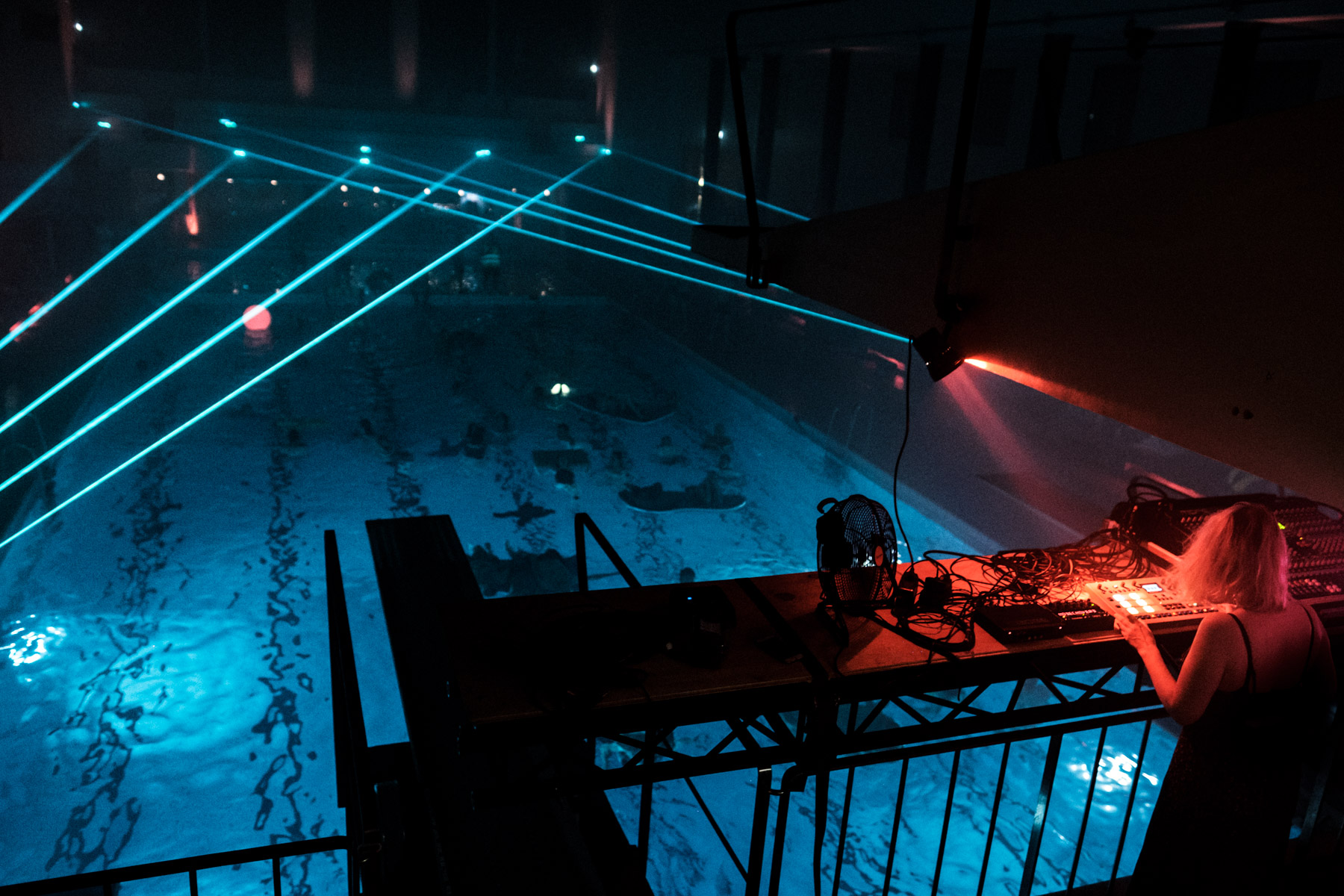 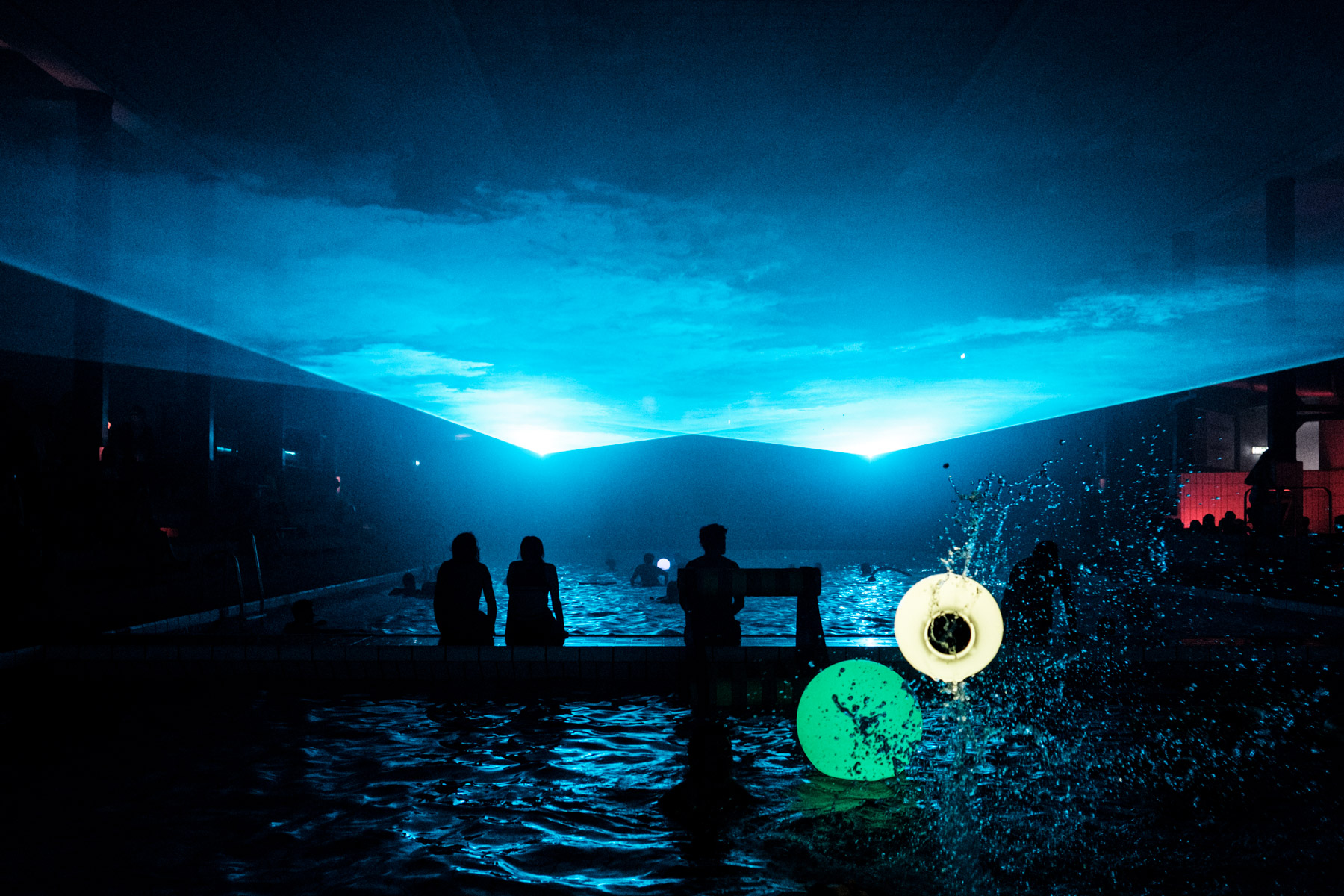 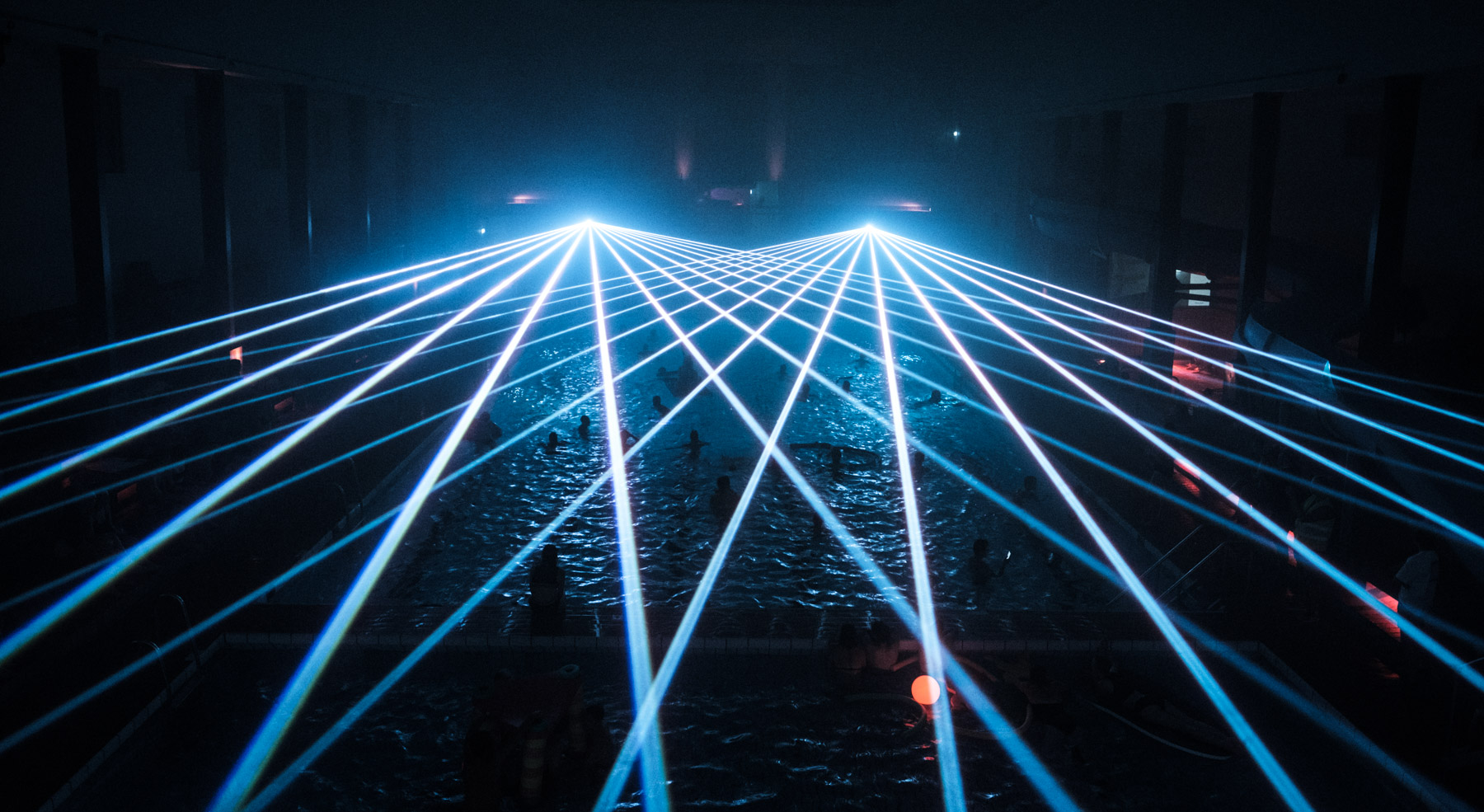 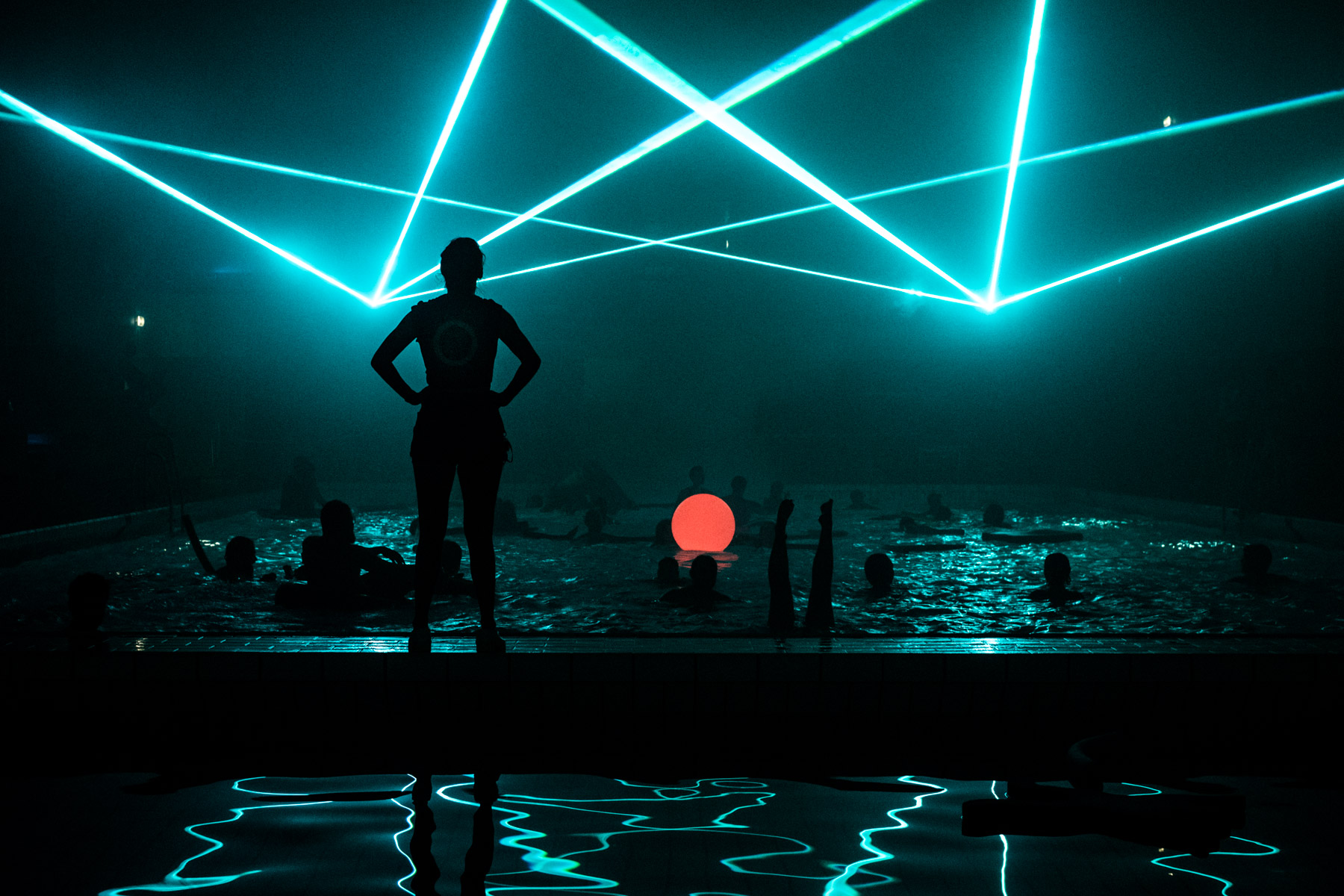 Event manager Matilde in control and those lasers reflections in the pool are just mad! 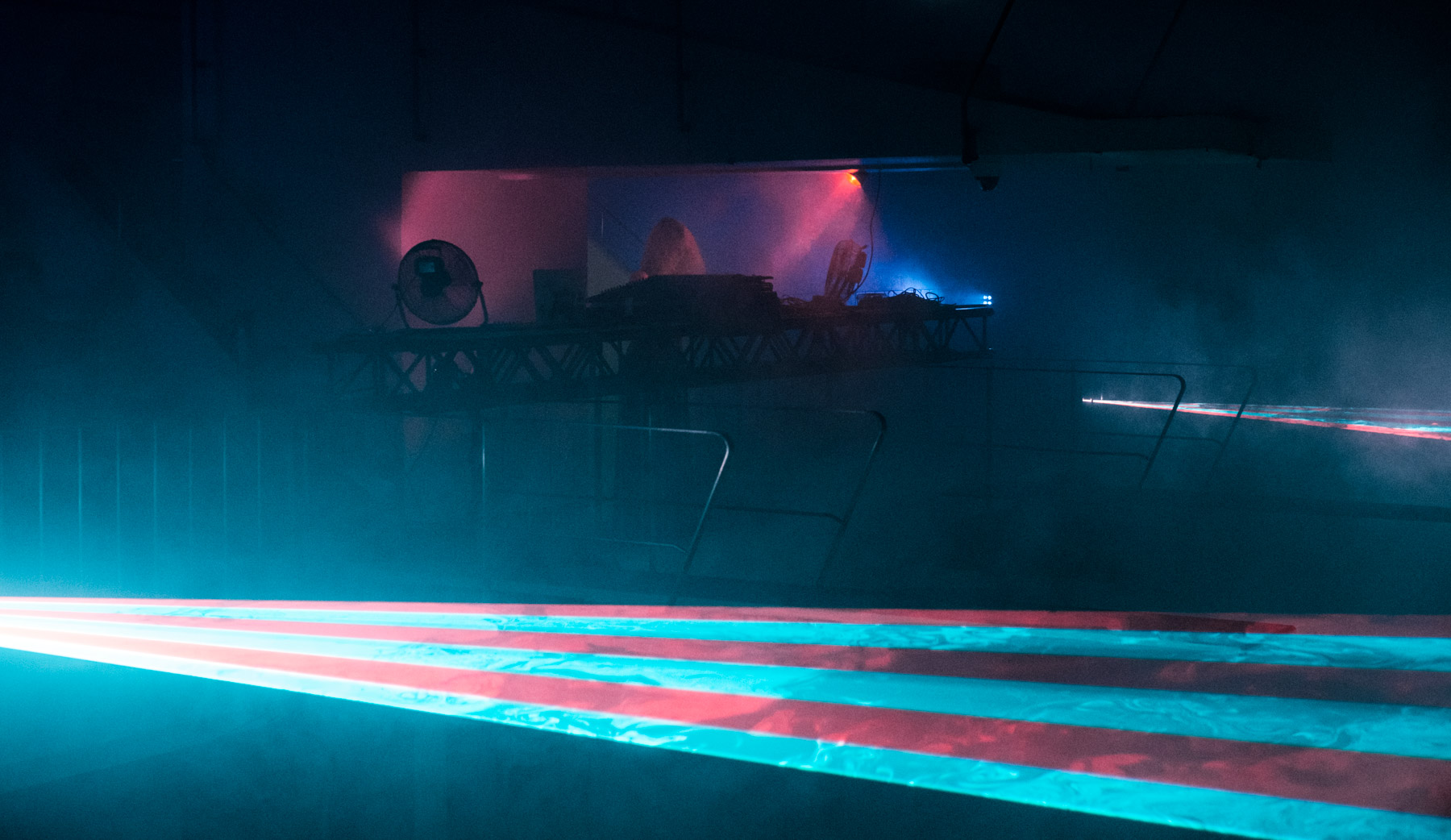 You can just make out SØS hair on the platform by the 3 meter jump. And the massive lasers. 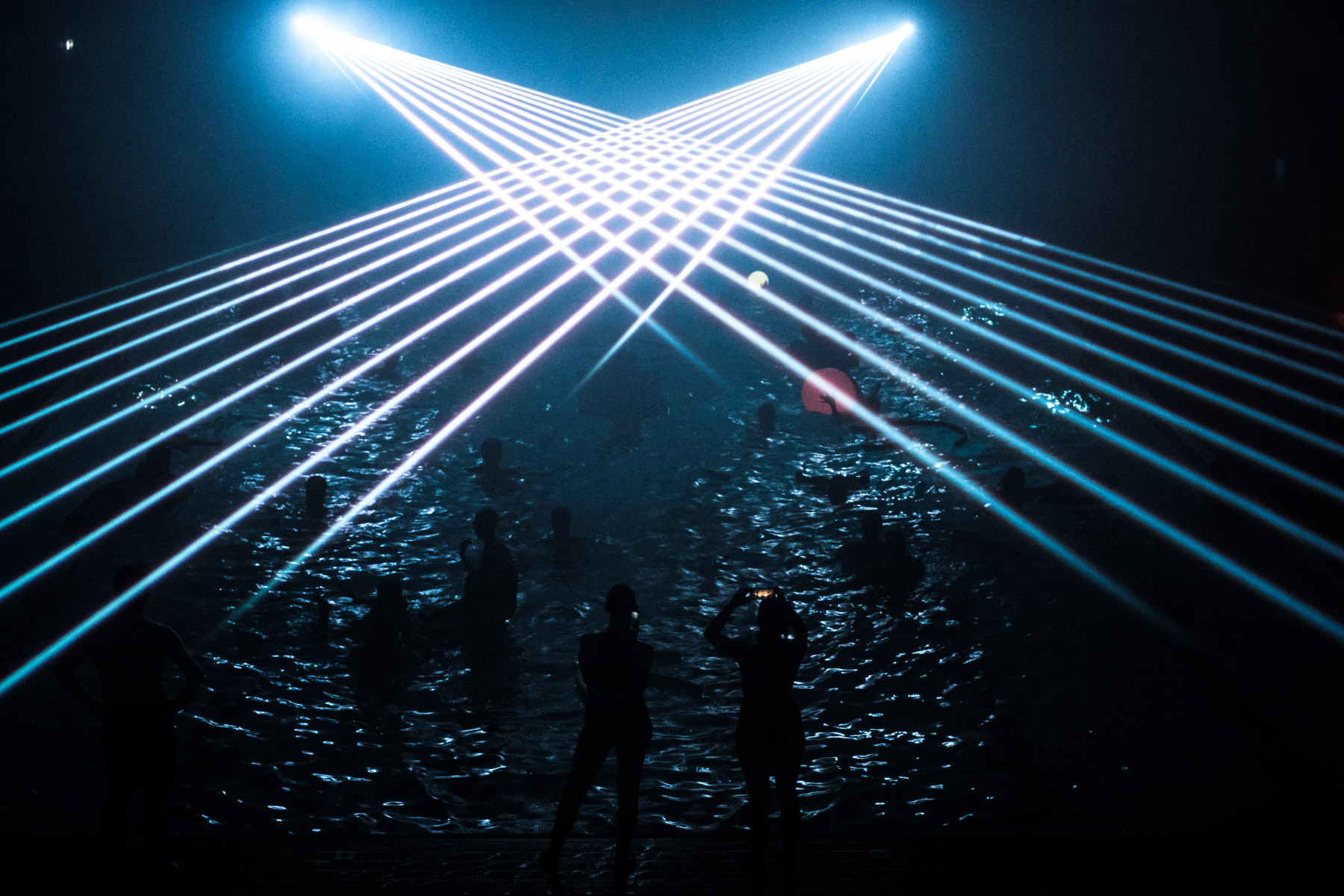 To me this looks like some giant spaceship landed at night on a beach! Completely surreal. 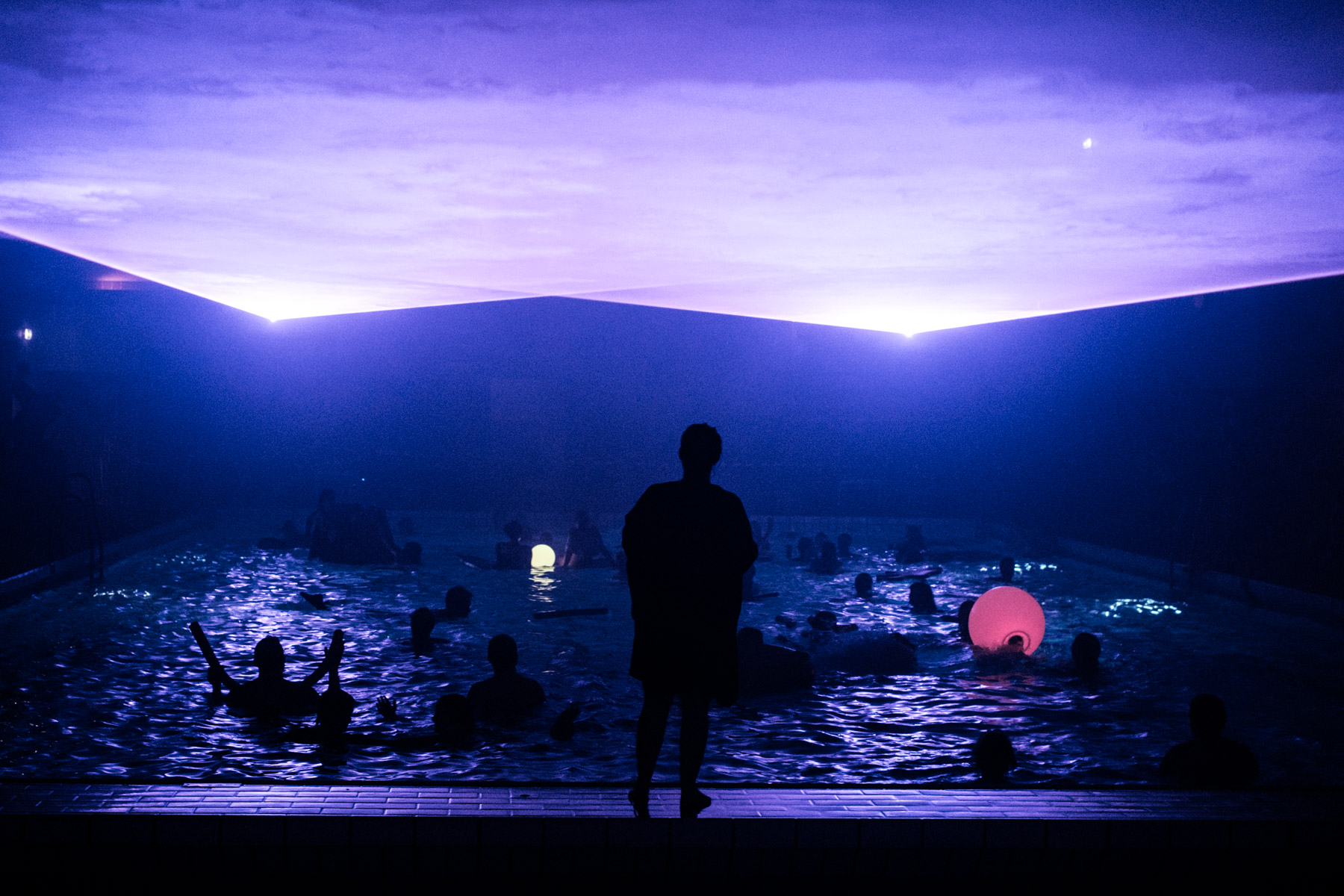 The laser ceiling is a classic Laserfabrikken trick! 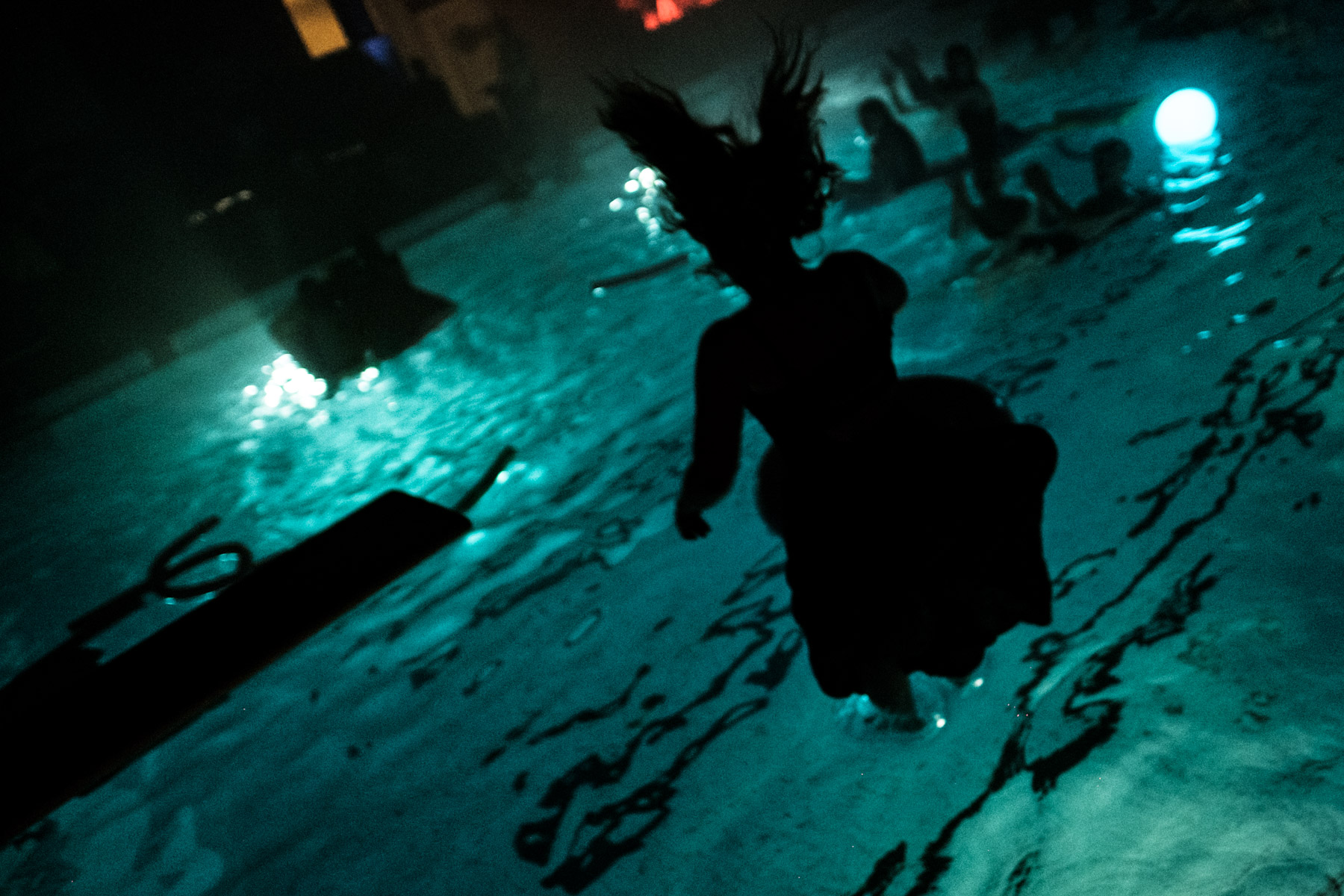 SØS joined the crowd in the pool after her set! It looks like I am about to fall in too but I did manage to stay out of the pool. 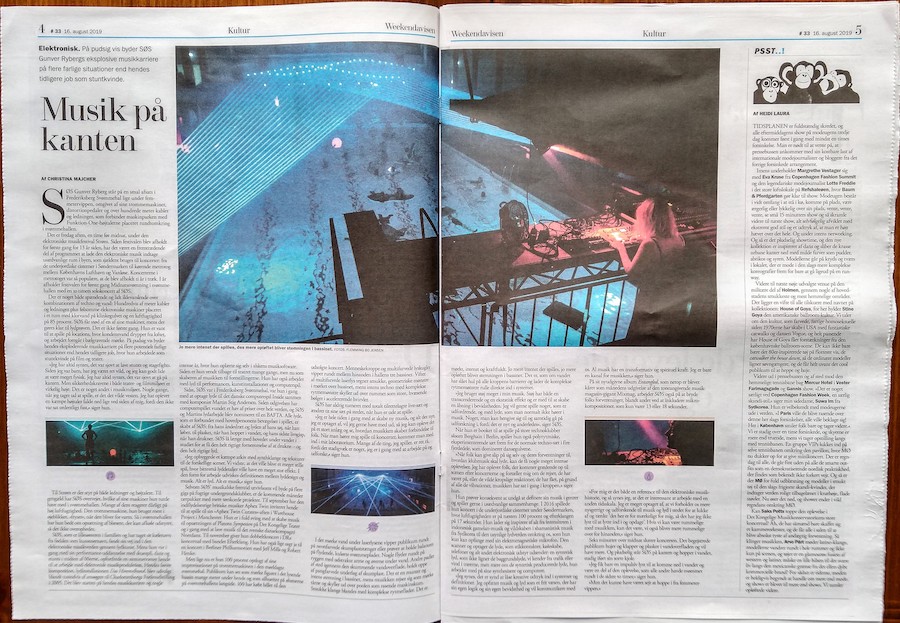 Article by Christina Majcher in the newspaper Weekendavisen

Credits for the event