Studying clouds and attempting to predict the weather is a full time job for any outdoor photographer. It is how we try and increase our changes of getting that special shot. It is also incredibly fascinating. Clouds are for dreamers and I never tire of observing or shooting nature’s big canvas known as the sky.

On a warm Summer night you will often get some high level cirrus clouds that looks like Nature the Artist did a few lazy and casual soft brush strokes here and there. Usually these clouds disappear before sunset but occasionally they stick around and when they do the colours are quite spectacular. Wednesday night was a good example of cirrus clouds here in Copenhagen and I was in place to capture this panorama:

This is a 170 degree view of Copenhagen shot directly into the sunset across the harbour. It is a good spot for getting as much sky as possible and the same spot as this Harbour Storm panorama. It was in the middle of a warm Summer week here in Copenhagen with temperatures above 30 degrees creating cirrus clouds. Everything is relative someone once said and what we call heat wave is a cold day in the Northern Territory! Nevertheless a super lovely day and sunset.

This panorama is 7 vertical images stitched in PTgui (PTgui really had to save me this time, more about that later). Shot with 17-40mm L  lens at 20mm, f/22.0 using 1.3 second exposure with a Cokin neutral density filter attached. RAW files were developed in Lightroom 2.0 and the final stitch received very little post production in Photoshop. Nature the Artist did all the work here, I just painted a bit more light into the shadows to show more of the buildings and added a vignette. The horizon is straight in this final version. It may appear slightly curved due to the wide 170 degree view but it’s straight. It wasn’t always so… 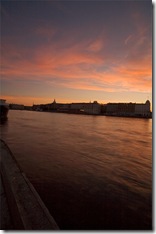 I have an uncanny ability to spot anything crooked, any horizon not straight even if it’s off by just half a degree. I use this super hero power to “help” other photographers straighten their horizon by politely pointing it out on their blogs; normally with some level of sarcasm. Well the photography gods are not without humour! When shooting the above panorama my head was in the clouds. I levelled the tripod and then moved it forward to the edge of the pier resting the front leg on a raised edge. Guess what. It’s not level anymore!

My tripod should carry a sign saying “I’m with Stupid!”

With my head in the clouds and also slightly trying to look cool because there are several interested people next to me on the pier I shoot away – and don’t even look into the viewfinder because hey! I have super powers. Thank the maker that PTgui is so good at stitching because on the right is the leftmost shot of the original files. Super powers indeed Human Spirit Level Man. Oh the horizon!

11 Comments on “Nature the Artist”