My first images of the desert originated from watching David Attenborough documentaries as a child, seeing photos of the Sahara and Namib desert in my father’s books – and of course watching David Lean’s masterpiece Lawrence of Arabia. I am amazed to learn here in Namibia that the desert is all that but many other different things as well. All ethereally beautiful, haunting and magical.

Namib desert. The name Namib actually means wide open space. You may think 8 hours of driving through the Namib desert would be 8 hours of repeat scenery. You would be wrong. The desert keeps changing and re-inventing itself, gravel desert, sand desert, majestic mountains (yes I too was surprised, huge mountains in the desert), rolling hills, wide open plains with wildlife, dried up riverbeds. Grass. It has rained more than normal so the desert is green in many places! And sand dunes of course. Massive sand dunes. Small dunes. yellow sand, orange sand, deep red sand. Rounded windswept dunes. Tall laser sharp dunes reaching for the sky. Desert. What is in a name? A lot more than I thought!

The Namib desert is over 2,000 km long. Two thousand kilometres. It boggles the mind and challenges all ideas of distances and space. So much space. I boarded a 6 person ‘flying bathtub’ of a Cessna to get images from above. Once airborne my eyes struggle to compute the information. The Namib desert is larger than many countries. So much space. So beautiful. Sand dunes snake their way to infinity. Again, shooting a photo is like fitting the universe in a shoebox. No photo can convey the feeling of being in the desert heat, wind and dust with a 360 degree view of pure desert. But I can try. And come back and try again and again, as I have fallen in love with this hauntingly beautiful place.

My entire belief system is all natural science. But the normal laws of nature and physics  do not seem to apply here. On every desert trip we’ve been discussing how far away the perceived horizon is. Meaning with a perfectly flat surface, where would an 1.8 meter tall human perceive the horizon to be with the curvature of the earth in mind? In the desert it seems like hundreds of kilometres. A lot of googling has not revealed a definitive answer but it appears to be around 4.5 kilometres away. The perceived horizon on a flat surface that is. Does not make sense. Here in the Namib it is 50 km at least. Also, my 17mm wide angle captures about a 110 degree view. In the Namib that looks like the width of a hair. It appears the view in the Namib is also wider than 360 degrees. Driving back through the desert Sunday night we had bright as daylight deep red burning dusk light on the horizon in front of us. To the right a sliver of a moon. To the left the Southern Cross and a million stars. Behind us the dark night. Must have been a 720 degree horizon. Something magical is up with the laws of physics in the Namib!

Creating images of this is indeed proving difficult but here’s a few quick previews of my feeble attempts of capturing the many shapes of the desert. I am saving the real hero shots for when I get home so stay tuned. 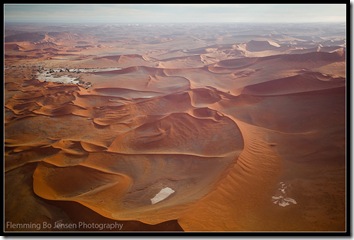 Dunes of Namib-Naukluft stretching to infinity

Into the abyss, the desert in dusk light from top of Rössing Mountain

Windswept round dunes outside Swakopmund