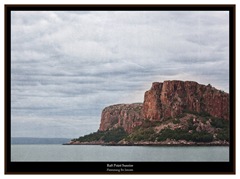 Towering walls of ancient red rock and peaceful pebbled beaches and the scene of a human drama on an epic scale. Raft Point and Steep Island are found on the Kimberley coast in Western Australia.

Will our three heroes of Epicness Incorporated survive yet another epic photo expedition from the True North? 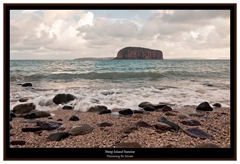 Dave Bettini, True North Mark and I jump in a tender boat around sunrise to take us to the pebbled beach at Raft Point Bluff. It is a warm cloudy beautiful morning, humid to the point of calling it light rain. Behind us is a steep rock climb covered in thick tropical green bush. In front of us, the mighty Steep Island somewhat resembling a smaller Uluru in water. We scout the area, my chosen composition is Steep Island as I find the rest of the scene too busy. I wish to capture very simplistic landscapes in the style of old paintings presently. I tend to gravitate towards a square straight on look, possibly producing a flat compressed style image. Perhaps it is less of a photo more of a painted look. Post sunrise I capture the beach and Steep Island in the image to the right, which may be a tad too plain for my present taste. I then have plenty of time to shoot video and create a timelapse as seen in my video Kimberley Tales. I also find the time to drown my remote release in water, ending it’s life. A storm then passes right in front of us, creating a scene that is one of my favourite images from the trip: 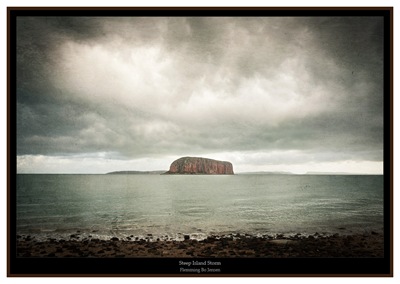 The storm causes a small amount of rain to hit us and a scene of True North Mark shooting under the cover of an umbrella is unfolding. Unfortunately so far away I am unable to document it, you will have to take my word for it as it was a dear sight to see.

At this time we have used up almost all of our time on the beach, but there is still some amazing rock art far up the bush rock wall behind us that we would like to see. So we begin the climb and I wish someone had done a documentary shoot of us. The drama. The fun. There’s Mark in front as we go up, barefoot always, pushing through the bush quickly as we’re almost out of time. There’s Dave, sweating a liter a minute, in his left hand a large tripod in a large camouflage bag resembling something holding a bazooka. In his right hand, a Phase One in a heavy large grey flight case (I still hear the sound of that thing scraping on rock). And there’s me, attempting a barefoot walk but having to put on my funky orange FiveFinger ‘shoes’ halfway up. The F-stop bag is larger than my own skinny self, the tripod head sticks up and constantly gets stuck on vines. The bush is so thick we cannot see each other, only hear the superhuman efforts being applied. After 20 minutes of climbing, Captain Brad radio’es us. We have 40 minutes left. Simple math says we may need to time travel as we still have a ways to go up the mountain let alone climb down again.

We arrive at the rock shelter and the art is really stunning  (I debated showing you, but it is not my art to show without permission). We have 3 minutes to shoot and head straight back down, Dave is now looking like he might explode any minute. I am in front, which is always an interesting idea, as I daydream instantly, forget where I am and I wander off the hard to see track. So we end up following a very rocky slippery stream straight down the mountainside, battling thick bush and vines constantly. Stitchmaster Mark gets stung by a bee, prompting a very loud F word Wilhelm-scream. Dave slips on a rock. I slip on a rock. Finally we get to the bottom and a tender boat is waiting for us. Mark’s final comment as we finally emerge at the pebbled beach and see the tender boat awaiting us: ‘I am not sure this was worth it fellas’. I am sure. The art was stunning and the story is priceless and collectable.

The things we do, living on the edge in Epicness Incorporated. It is a good thing the True North, a hot shower, coffee and cookies were waiting for us just a few minutes away. A true story in the life of Epicness Incorporated. Slight dramatization may have been applied in the writing. Our three heroes live to capture the next scene.