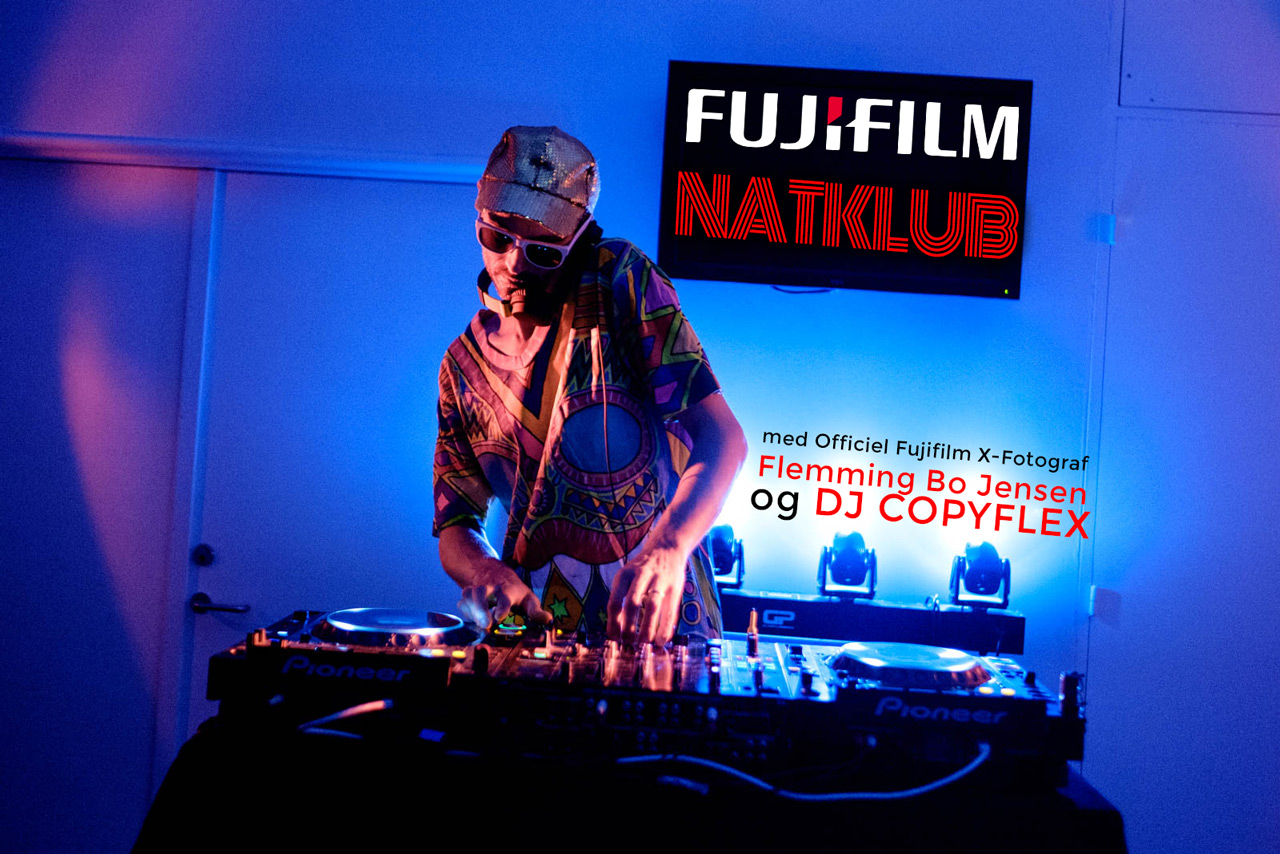 My phone rang while I was in Copenhagen early June. It was the crazy and wonderful Ib Thordal from Fujifilm Nordic with a wonderful and crazy idea for me – did I think that we could somehow set up some sound and lights and pull off some kind of music photography workshop at a big 1000+ people Photo Meetup Copenhagen event in August? “YES” I said, that sounds like a totally crazy and kick ass awesome idea. And a dream come true for me personally if we could pull it off. I truly love music and music photography and to run my own little nightclub and a workshop and give people a taste of the world I love sounded magical!

So I kickstarted the preparations, we needed our own room at the event first and foremost, a room I could turn into a nightclub. Then I needed sound, lights, smoke and a DJ. I spoke to Red Bull Studios Copenhagen and they liked the idea and very kindly offered to provide their Red Bull Sound System for the event. We had sound. I rented lights at the highly recommended Megasound.dk in Copenhagen. We had lights. Now we needed the DJ.

Ever since the idea was born, I had one DJ in mind – my favourite DJ and friend Copyflex. I first photographed him back in 2012 where I made these pictures, I have since shot him many times. I knew he would be the perfect choice for our nightclub and he was the first one I asked. I sort of expected that it would be impossible for me to be lucky enough to actually book Copyflex, but he immediately loved the idea and said yes. We had our DJ!

So two and a half months after the phone call, on the day before the event we are setting up and I find I have to pinch myself to check if I am dreaming – the nightclub is coming together in front of my eyes.

We picked up the lights in my aunt’s awesome gold-coloured Toyota Yaris, a fine vehicle but a bit small and I am glad we did not have to transport the sound system in it! Red Bull arrived with the sound system and we got to work. 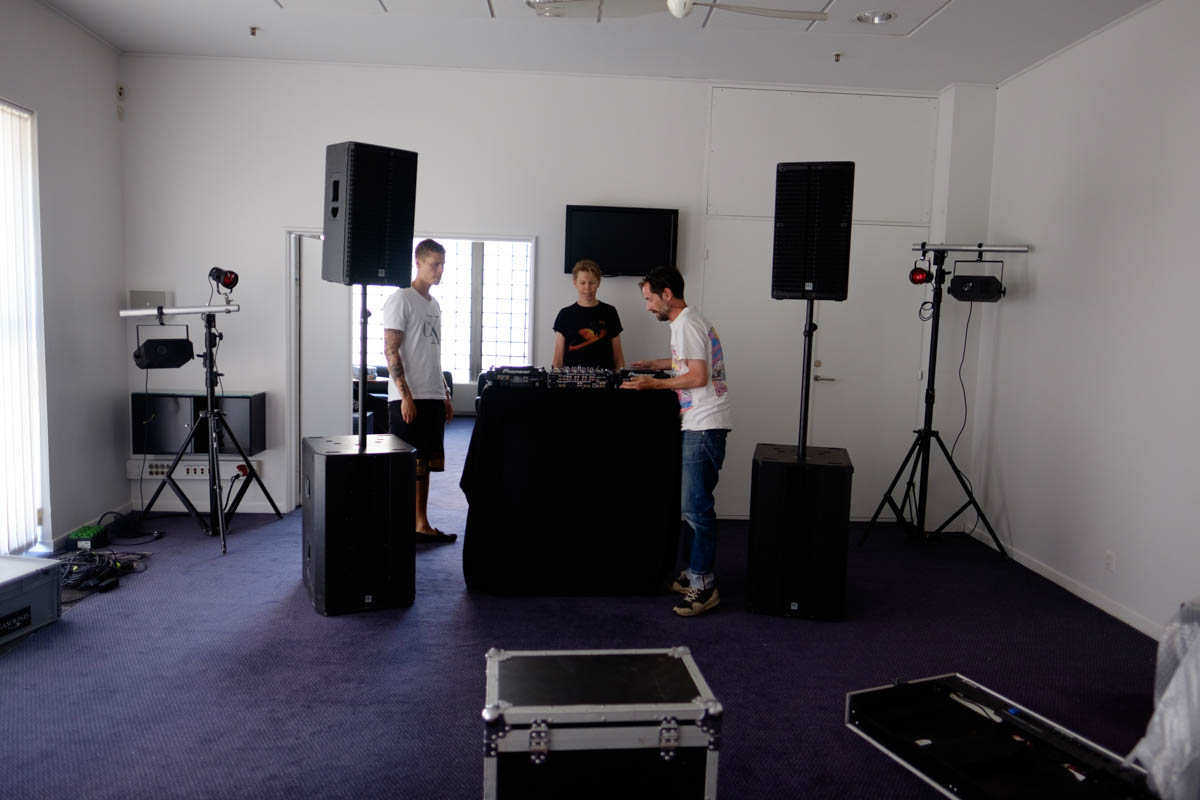 All smiles as Fergus and Mathias from Red Bull setup the sound. Picture by Charlene Winfed.

After setup was completed and before we left the building Friday afternoon, I could not resist spinning a few tunes on the amazing Red Bull sound system! I could have played all day long, but we needed to get some rest and get ready for Saturday. 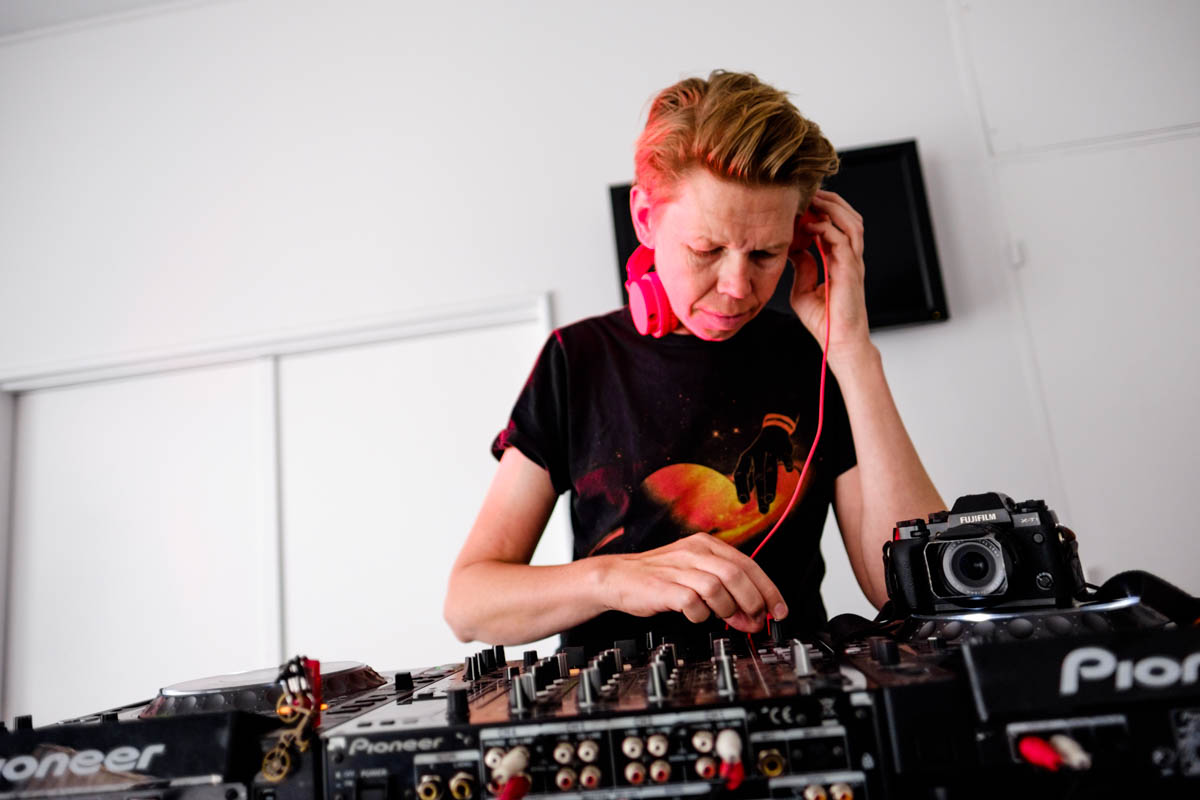 Saturday the 15th of August 2015 in Copenhagen, close to 12.00pm, the doors to Photomeetup.dk are about to open. Charlene and I had been here since 9.30am doing rehearsals and we are ready. The doors open and to my surprise, there are many people waiting to get in – I thought our first 12.00 session could be a sort of test run, but the nightclub is packed with excited people, so here we go! 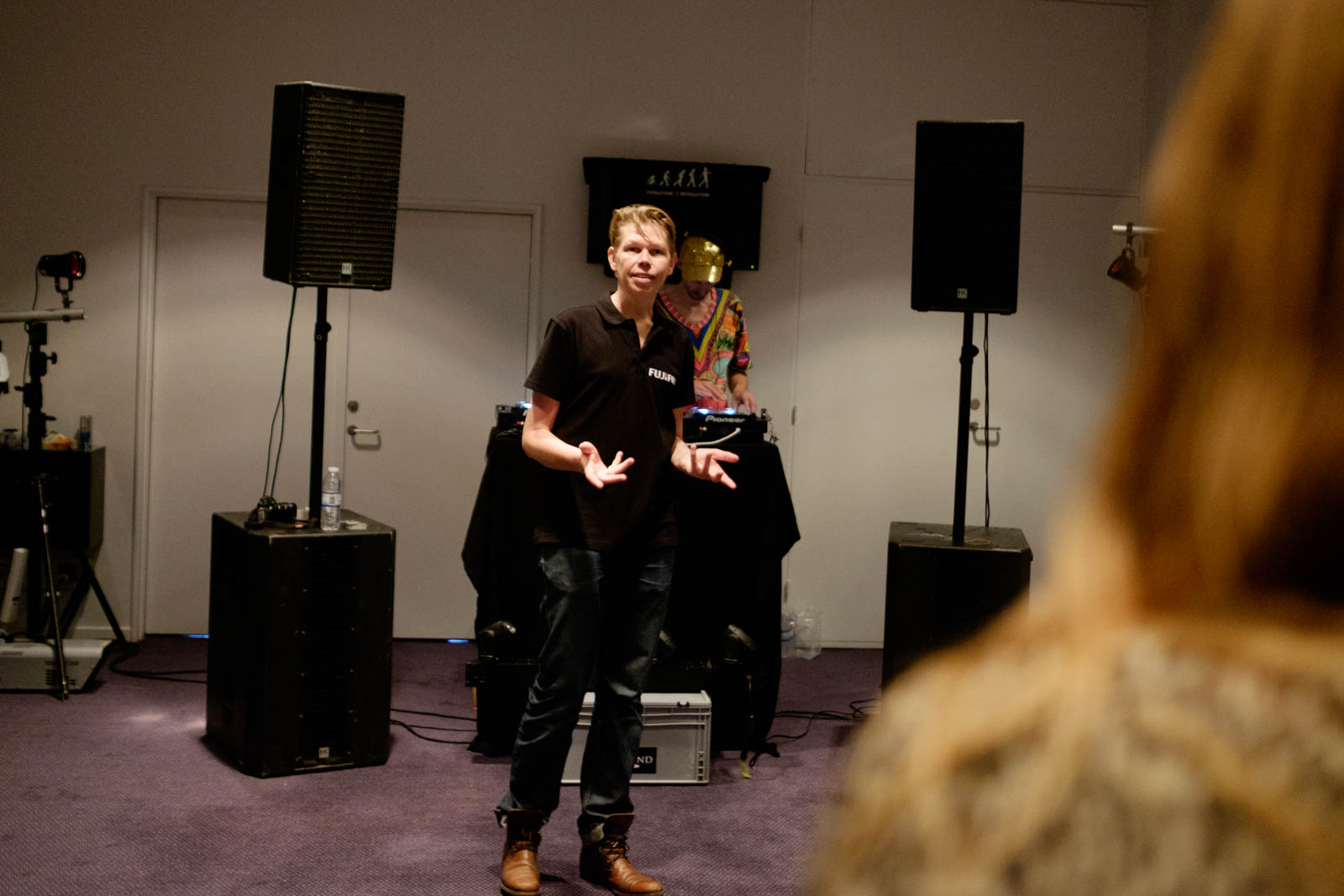 “Yeah I do not really know what I am doing either!”. Picture by Charlene Winfred.

I started out by welcoming people and talking about why we were running a music photography workshop – because I LOVE music photography and burn for it and want people to try what it is like. I talked about the challenges, what to look for to make great pictures and why I love Fujifilm X cameras for my work. After my 5 minute intro, it was time to rave and shoot! We turned off the ugly ceiling lights, turned on our funky lights and the smoke machine and Copyflex started his magic, playing some peak time bass tunes for about 10-15 minutes. Then followed a short 5-10 minute break, where I tried to catch my breath before we did the whole session over again.

The music was loud, the lights changed all the time, the room was hot and smoky. Apart from not having a big crowd jumping around and into the photographers, it was quite close to real nightclub conditions! We wanted to keep the sessions fun, short and action packed to be able to run many sessions during the day and get many people through the nightclub. 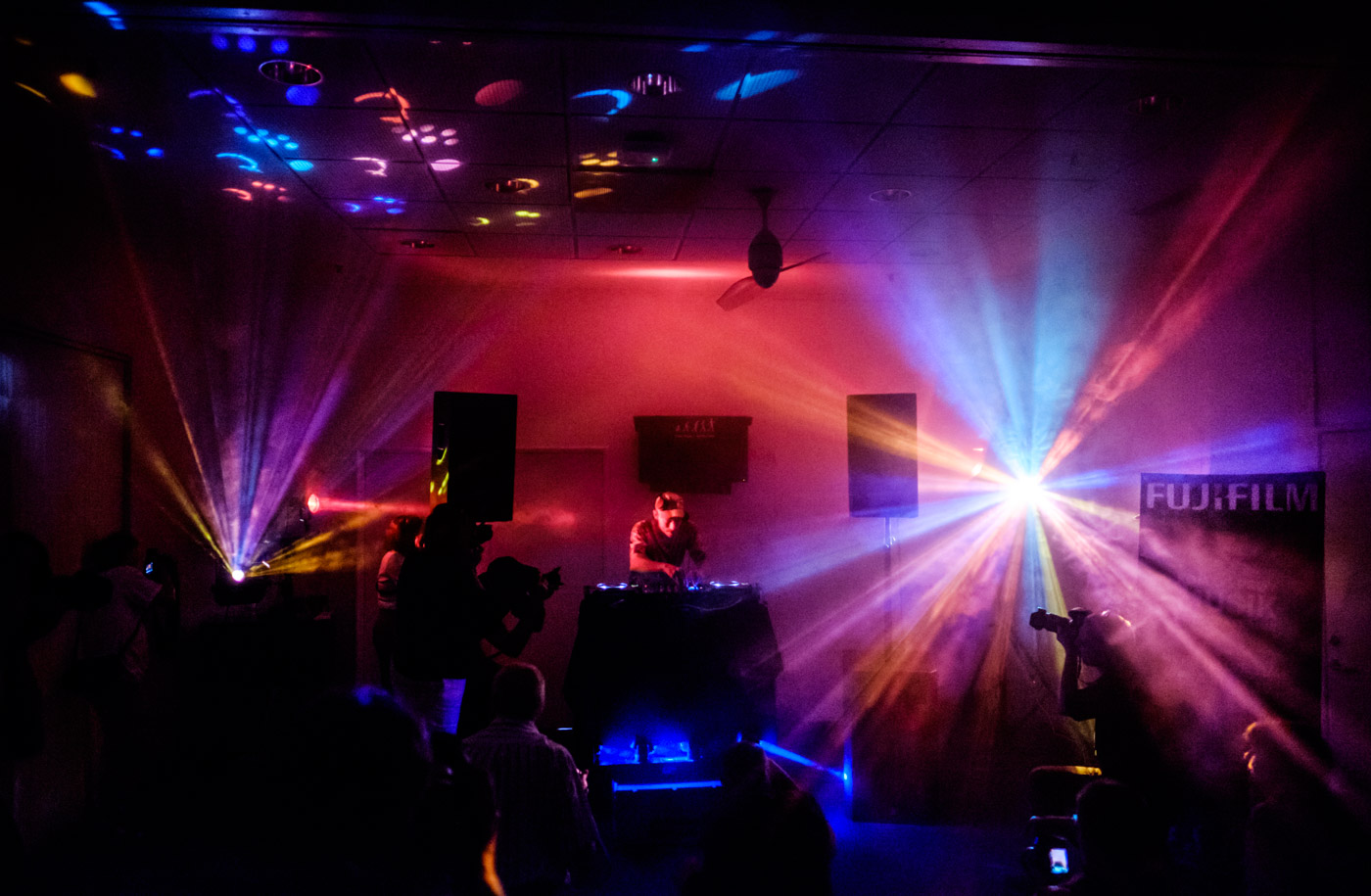 The Fujifilm Nightclub in full action! 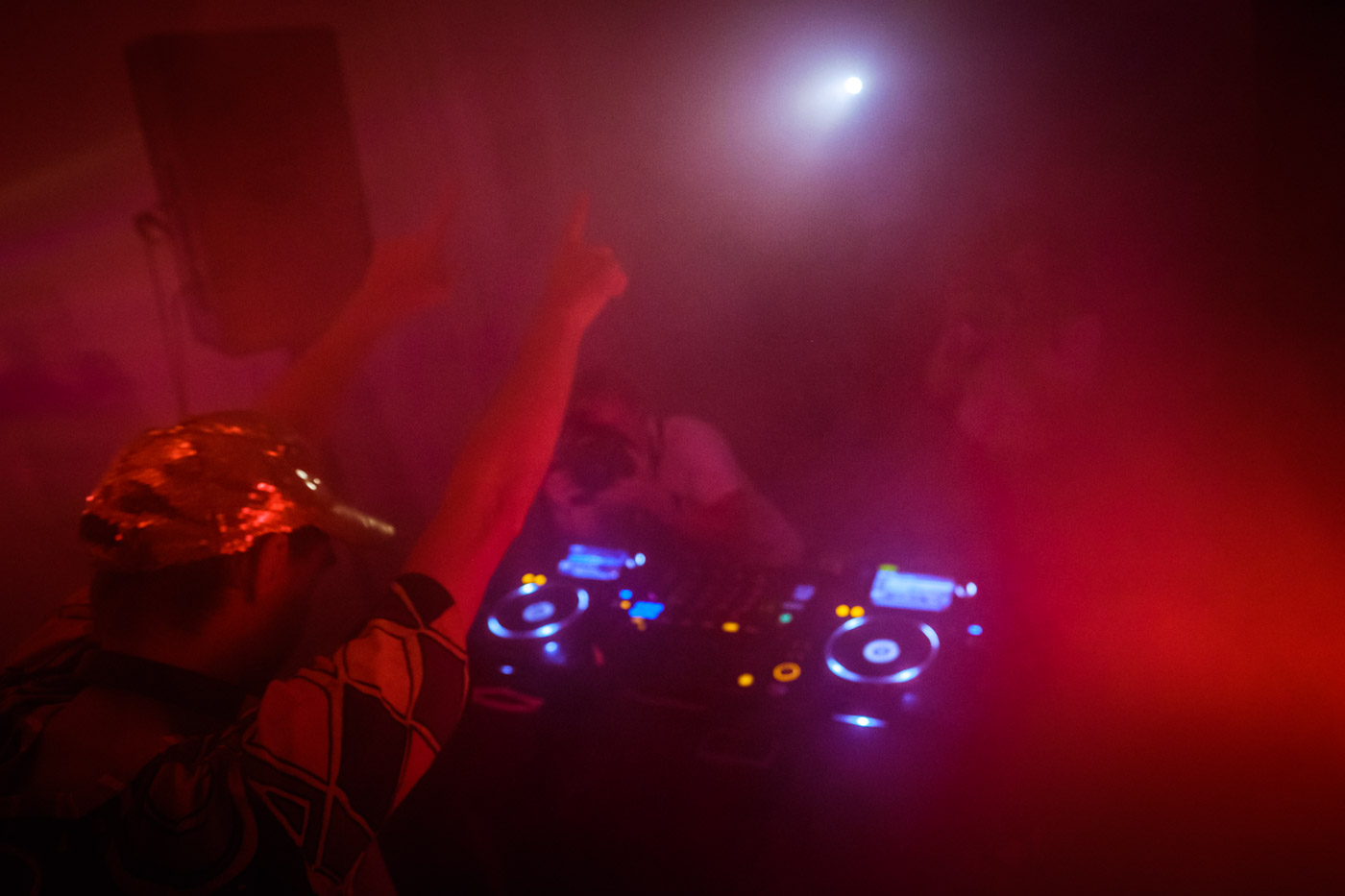 Smoke is good, lots of smoke is even better! 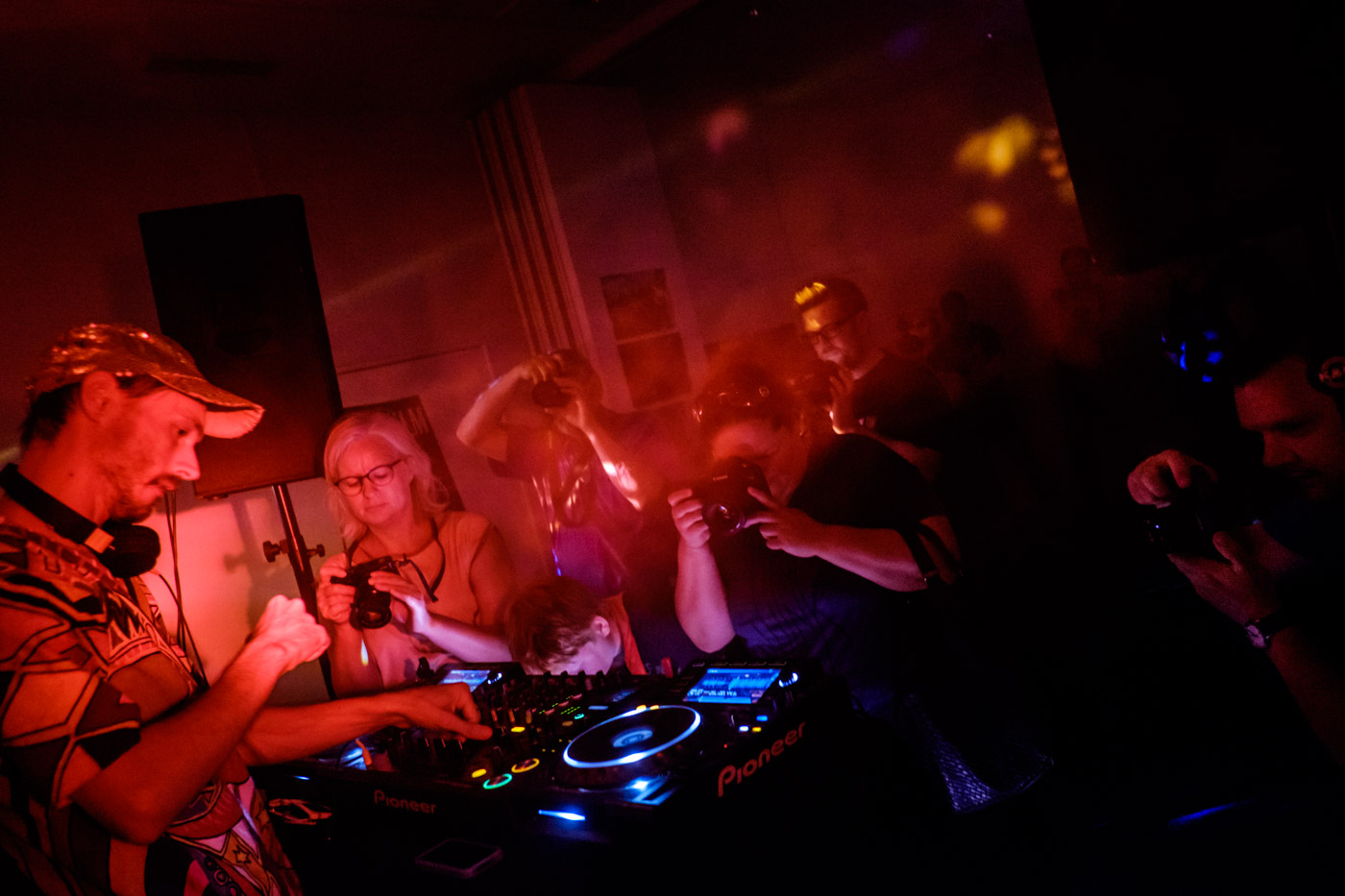 Copyflex working his magic while the photographers circle him looking for shots. 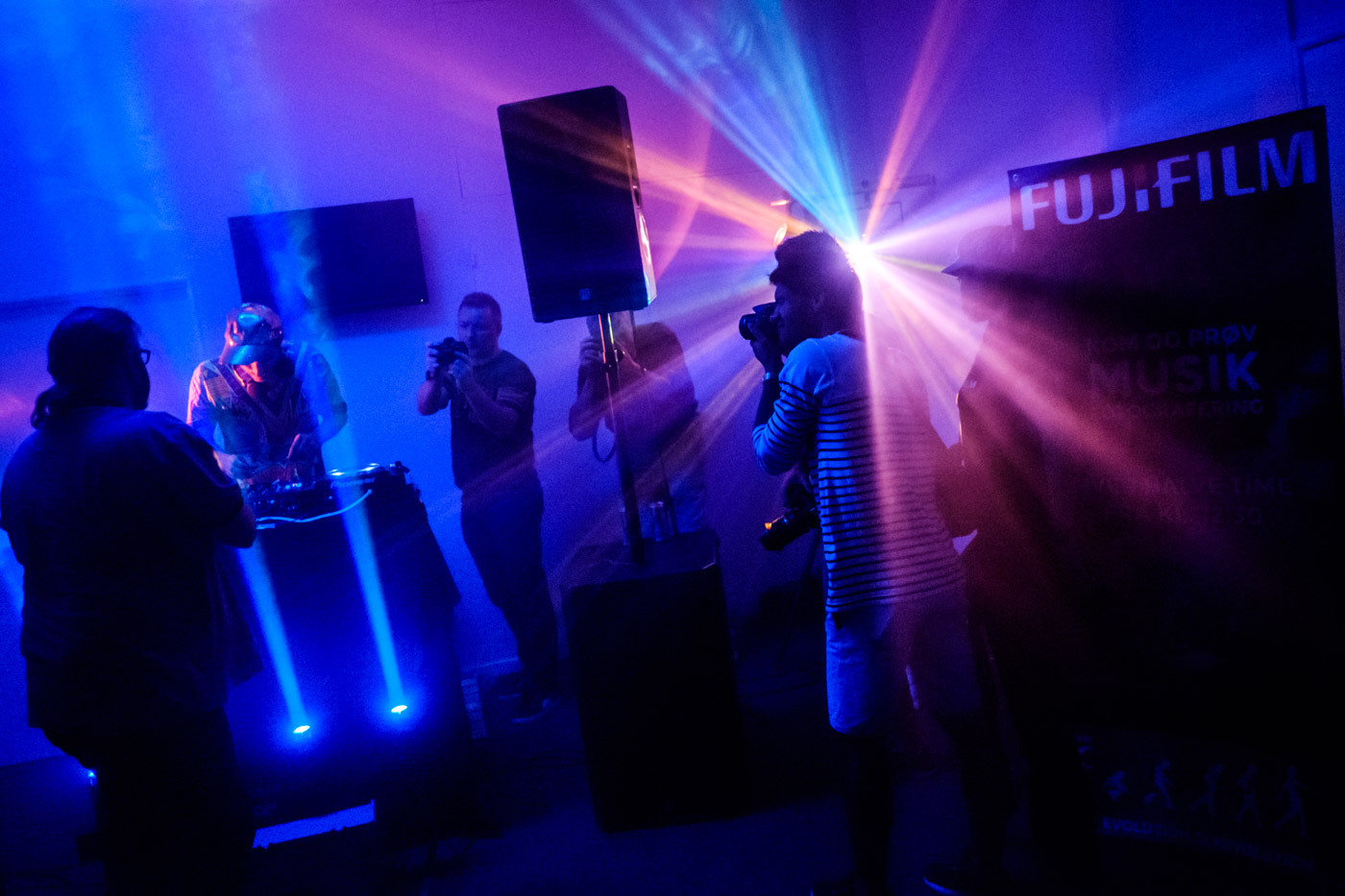 Photographers in the spotlight 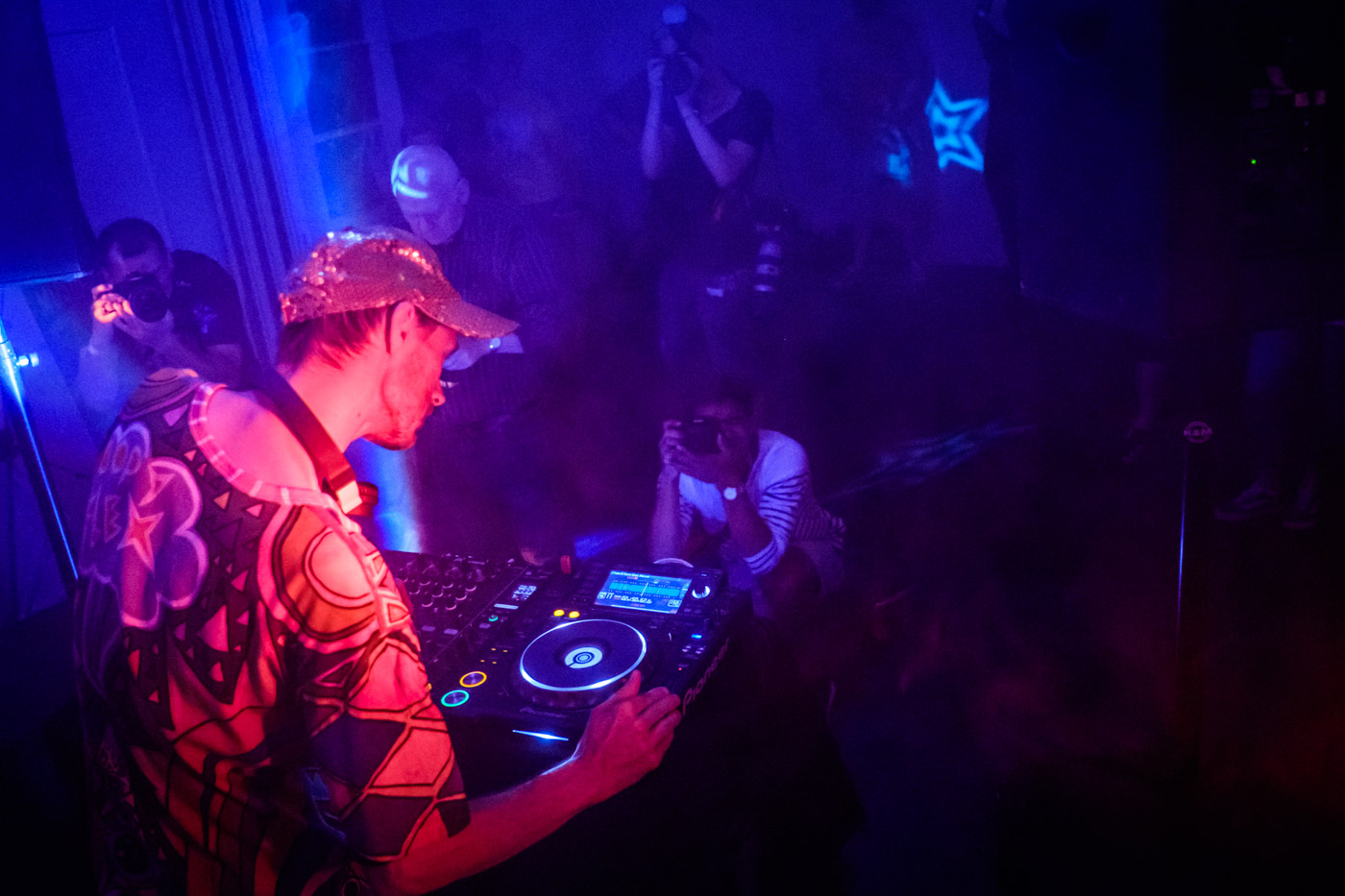 Copyflex was a popular guy! 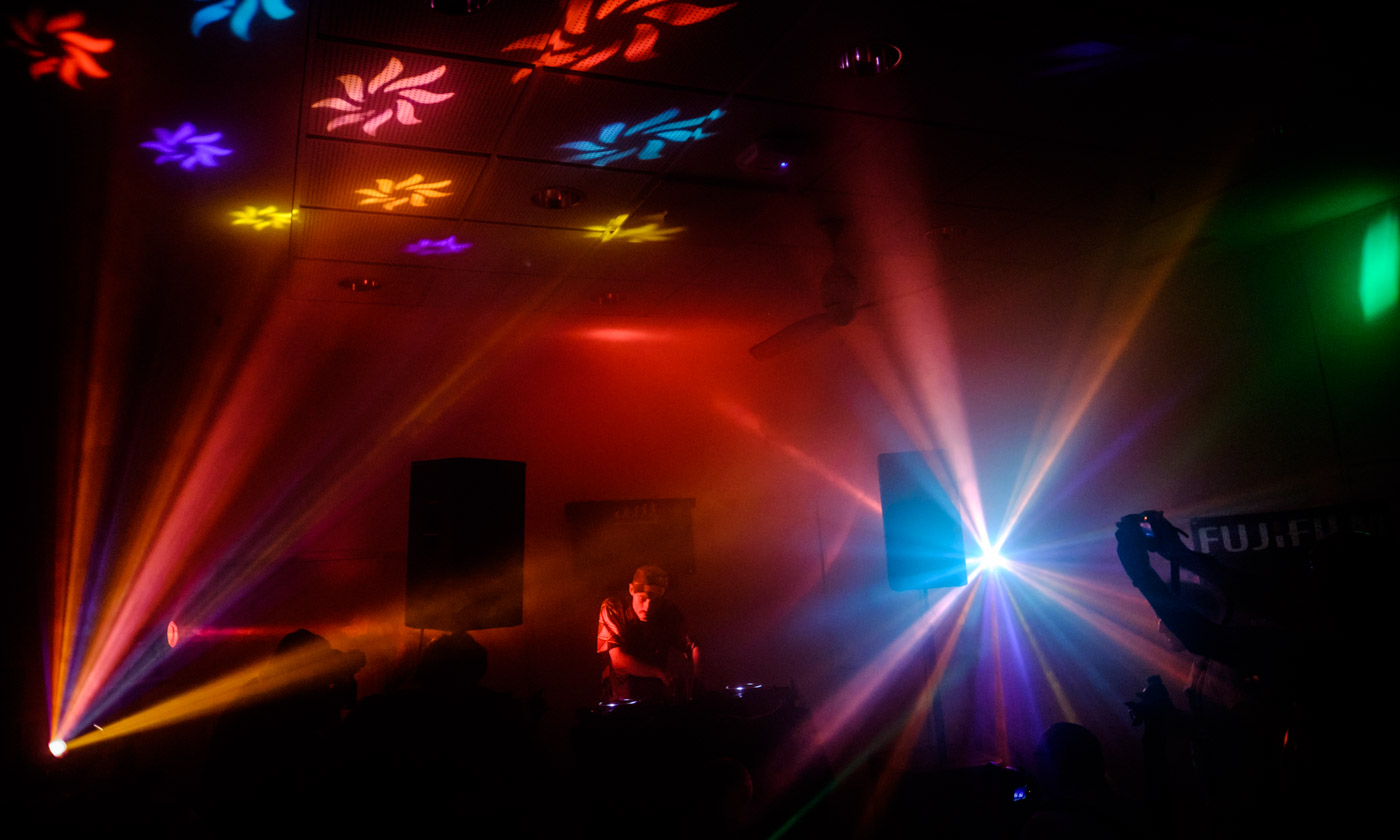 The office ceiling gives it away but we almost made the room disappear. We do need a black backdrop next time. 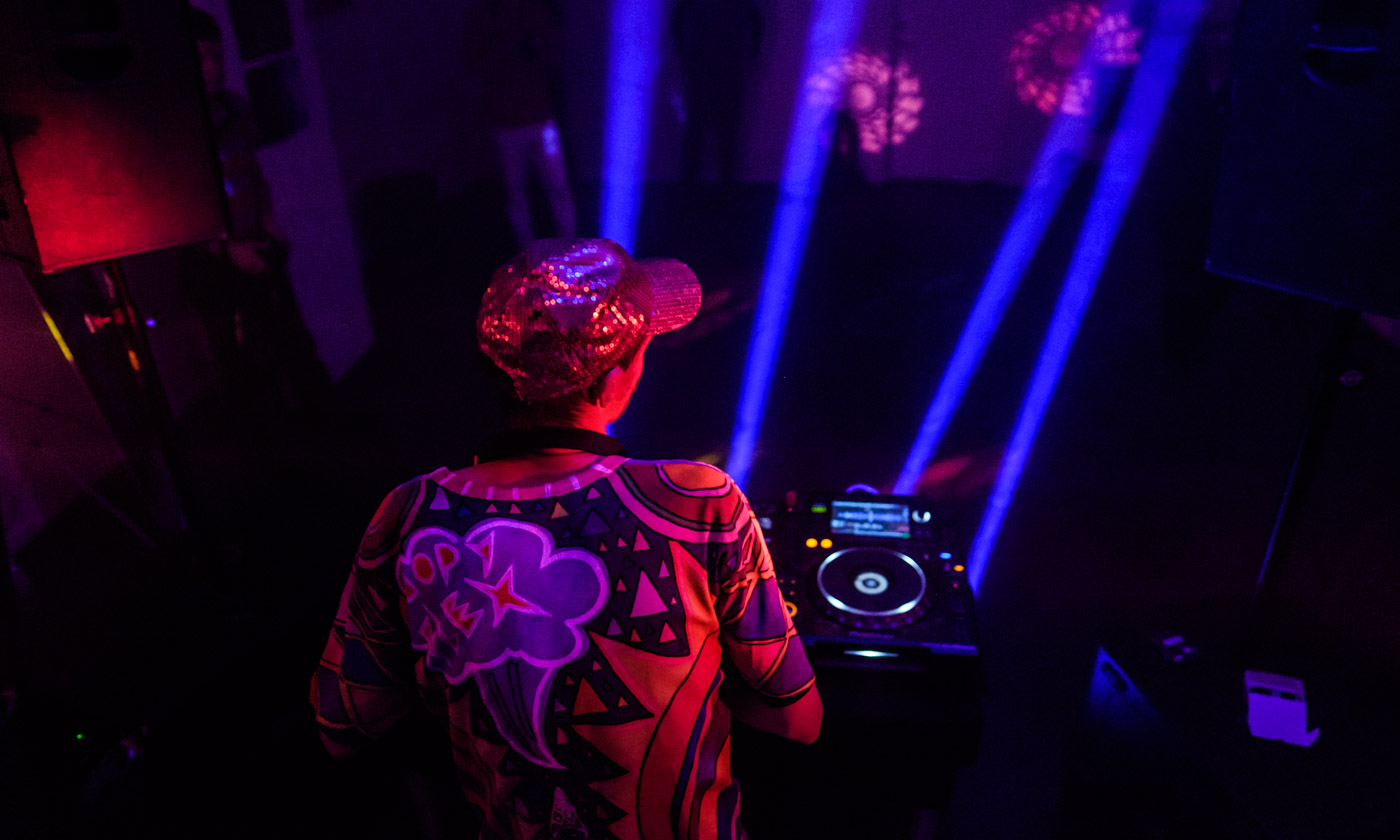 I am a sucker for moving head lights and next time I will rent bigger ones. 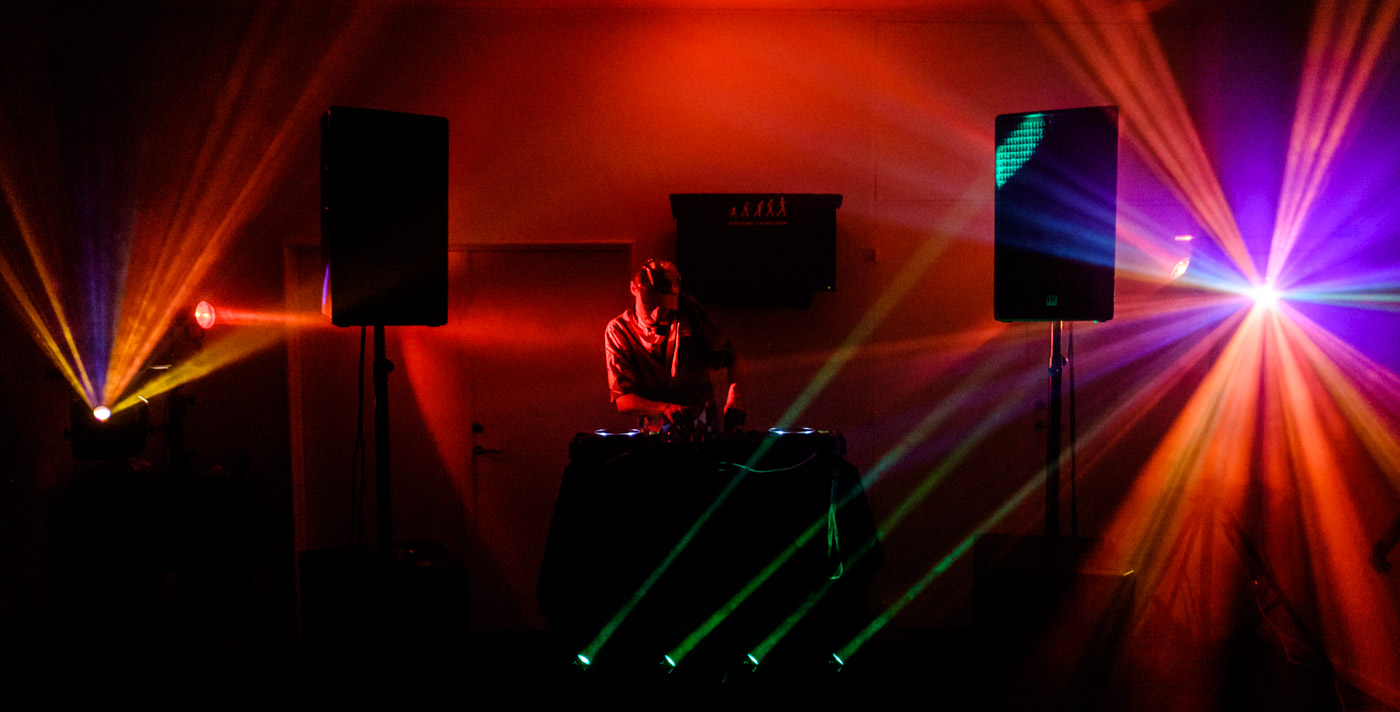 My final image of the day: Copyflex in our Fujifilm Nightclub.

We managed to run 8 sessions without a single glitch during the day and had more than 100 people through our nightclub and most people were very shooting all the time in the club.Some people even stayed for several sessions to shoot more – good choice, as Copyflex played a new set during every session, I really regret not having recorded all 8 sets!

I am really overwhelmed by how well it all worked, how many people came to our workshop and how much fun everyone seemed to have.  I received much positive feedback from everyone. It seemed people really enjoyed a taste of a kind of photography they rarely if ever would get to do.

This whole day really was a dream come true in so many ways. Getting to introduce music photography, hosting a “nightclub”, getting Copyflex to play in “my” club. I still cannot quite fathom it all happened.

Keep your eyes out for more Fujifilm Nightclub, we hope to repeat this fantastic event! Video also coming soon.

PS. At the end, I got to DJ with Copyflex for a closed 15 minute tag-team DJ Flemming Bo & Copyflex session. Unbelievable amounts of fun and another dream come true. More about this in the next blog post.

First and foremost, a massive thank you to everyone who came to the Nightclub event! You were outstanding!

Big thanks to my man Ib Thordal from Fujifilm Nordic for the amazing help and support and coming up with the idea in the first place! Red Bull Studios Copenhagen, especially Fergus, for continuing support and delivering their great sound system that even at 25% volume setting rocked the room. Thanks so much to the X-Group, the volunteers from the Danish Fuji Entusiaster facebook group, your help in setting up and also being bouncers for our club was invaluable.  Thanks also to Olympus, Michael Bang and all the organizers of Photomeetup.dk for a great event.

A huge thank you to Copyflex, you were killing it the whole day and were amazing, giving people a fantastic experience and tirelessly performing 8 sessions in a row!

Charlene, the light and love of my life, you believed in this and were there every step of the way since the idea was born. You made awesome pictures and video of the event, and most importantly, you ran a tight ship during the day and were the sole reason we kept on schedule! You make me magic every day.