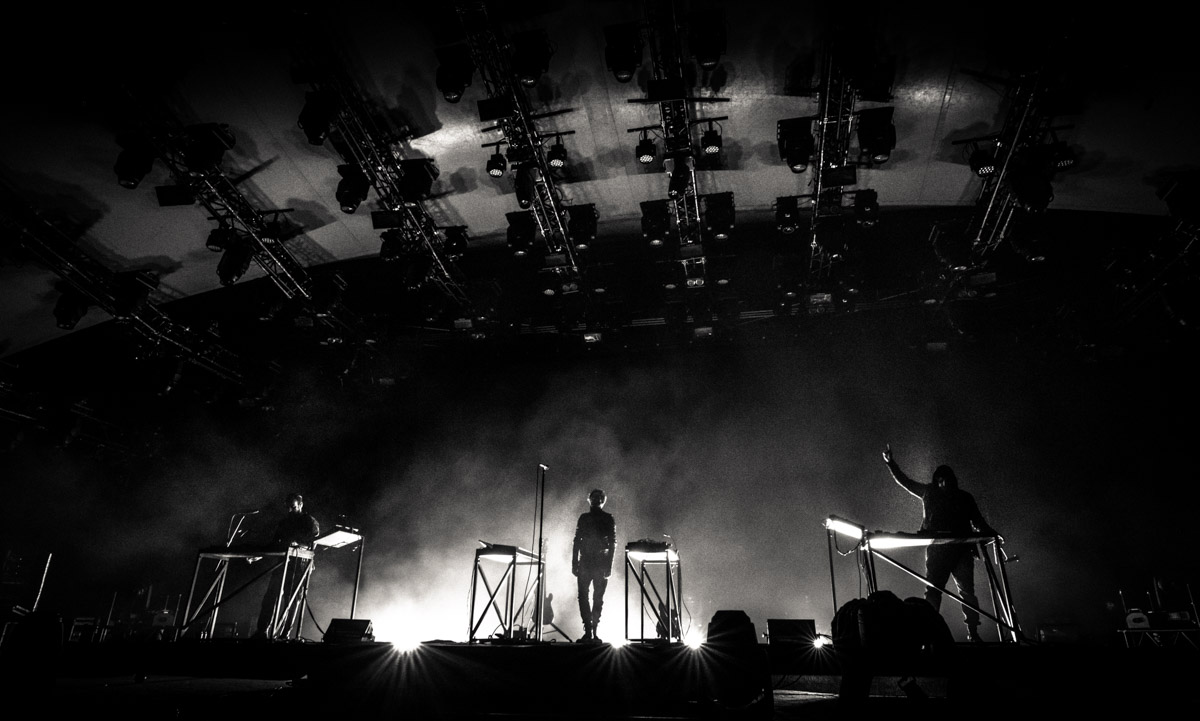 Out of the Darkness…Team Bad Kingdom

Moderat. The electronic supergroup from Germany, the one headliner above all else that I just had too see, had to shoot, had to hear in their full at Roskilde Festival 2017. I am a huge fan.

For the Orange Stage you cannot just show up at the photo pit like at the other stages, you need a special access sticker and there is only 30 (at the most) per concert and hundreds of photographers. I managed to get access to quite a lot Orange Stage concerts, but that one sticker for Moderat was kept in my bag in a waterproof casing until we finally got to Saturday night and the very last concert of the Orange Stage. The total takeover by Berlin. I had waited in line to be first into the pit for 45 minutes or so and while I am normally fairly chill before a show, for this one I had the butterflies and was somewhat lost to the outside world, mostly inside my own head. I don’t really remember the last hour leading up to it.

Cue those first beats. Cue Moderat appearing. And cue those 3 songs over way too fast and we are led away again, away from the stage and I run (well, walk) into the crowd and make my way to the middle in front of the stage. I am in ecstacy, the Orange has been transformed into a monster-size nightclub, with incredible sound and spellbinding visuals by the crew Pfadfinderei. It was actually the only concert at Roskilde I listened to from start to finish, even missing a show I wanted to shoot but I could not drag myself away (story in the caption of the last image). After 1.45 hours of Moderat, they changed setup to just being Modeselektor and they proceeded to tear apart the entire festival ground with their mad tunes. I must admit I did not catch all of this, I tried to get into the Sort Sol concert, failed, needed food, got cold, needed coffee etc. Story in the caption of the last image below. I am also more of a Moderat fan than a Modeselektor fan I must admit.

It was magic. My only gripe is the screen gets a bit lost on such a massive stage, and the Pfadfinderei visuals are such an integral part. I would like to see the show again in a slightly smaller indoor setting. But it was still really damn awesome amazing friggin cool.

To get a small taste of Moderat live and those visuals, check out the live in Berlin and live in Prague videos. Then imagine that transformed to the scale of the Orange Stage, my pictures really do not do the show justice, but here we go: 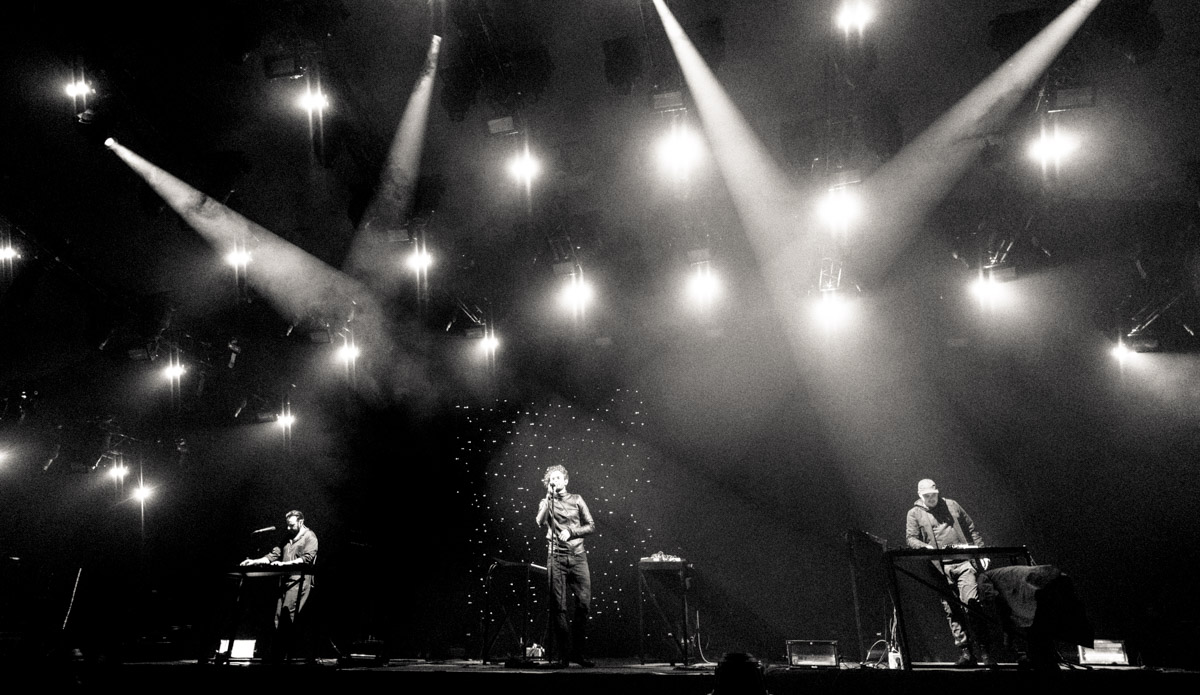 The trio, one of the supergroups in electronic music 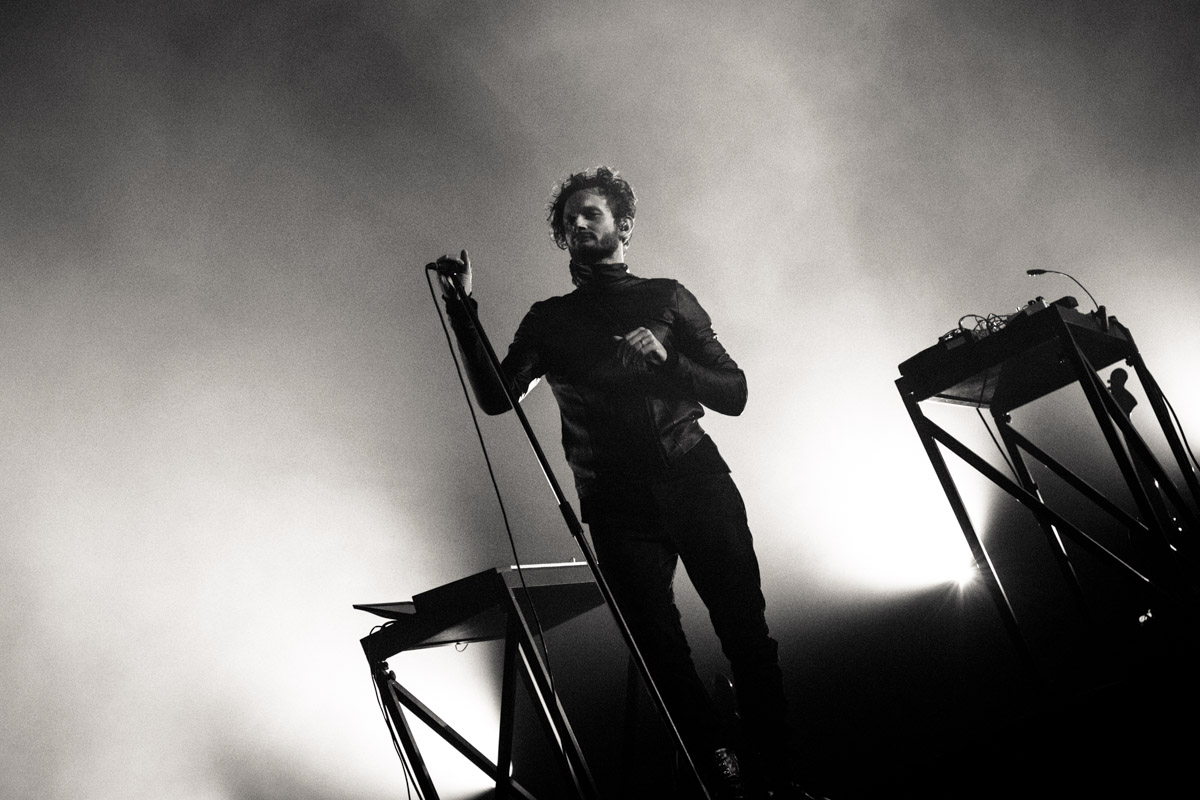 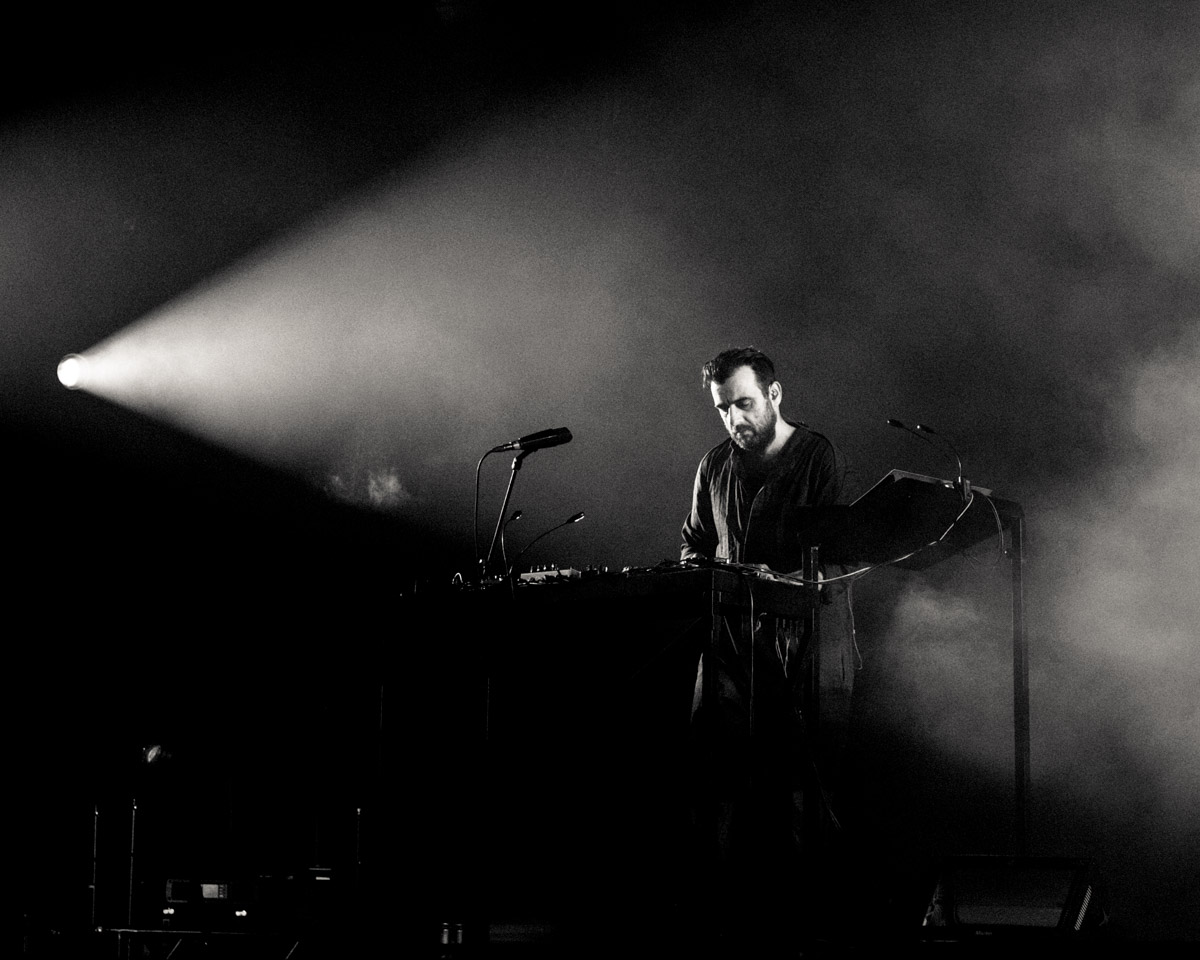 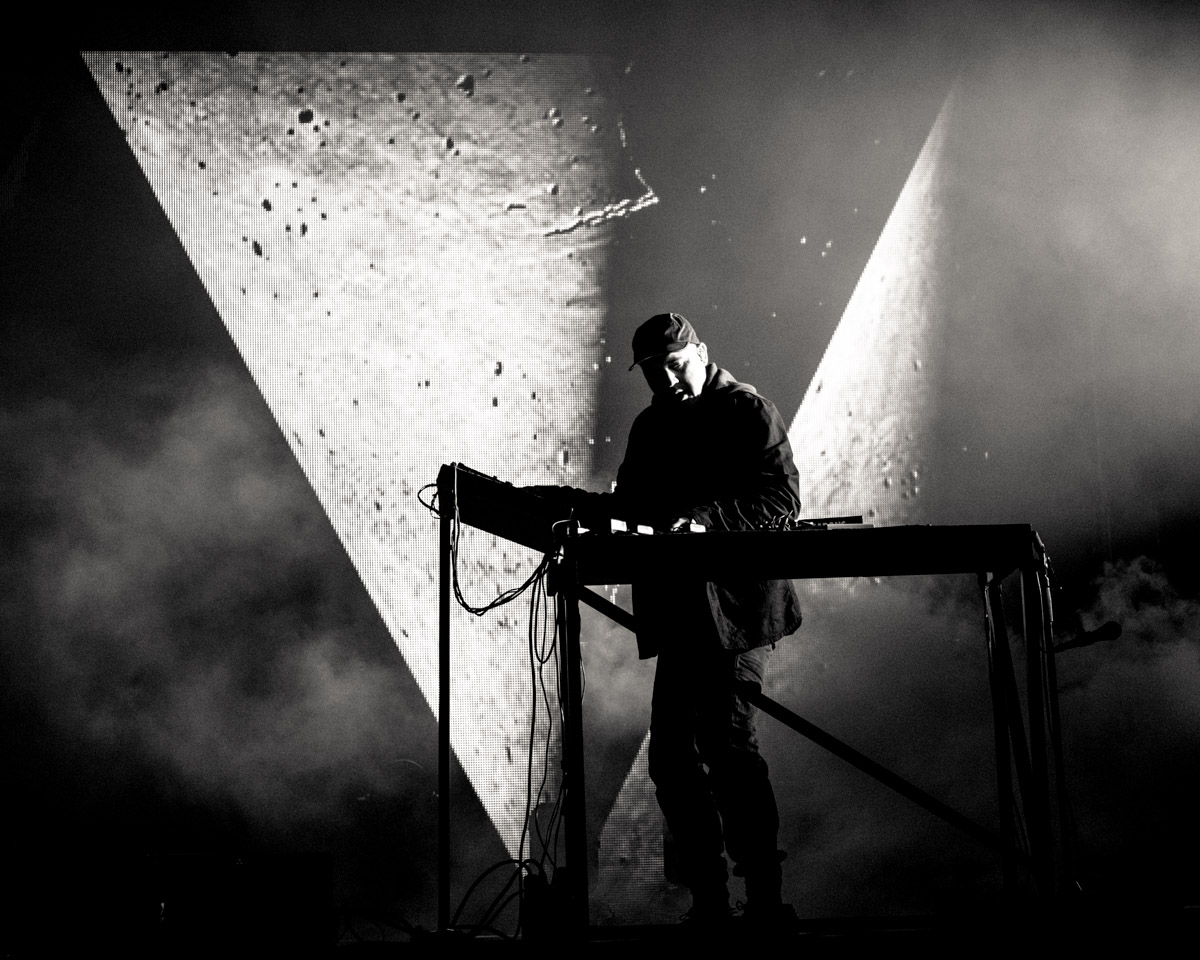 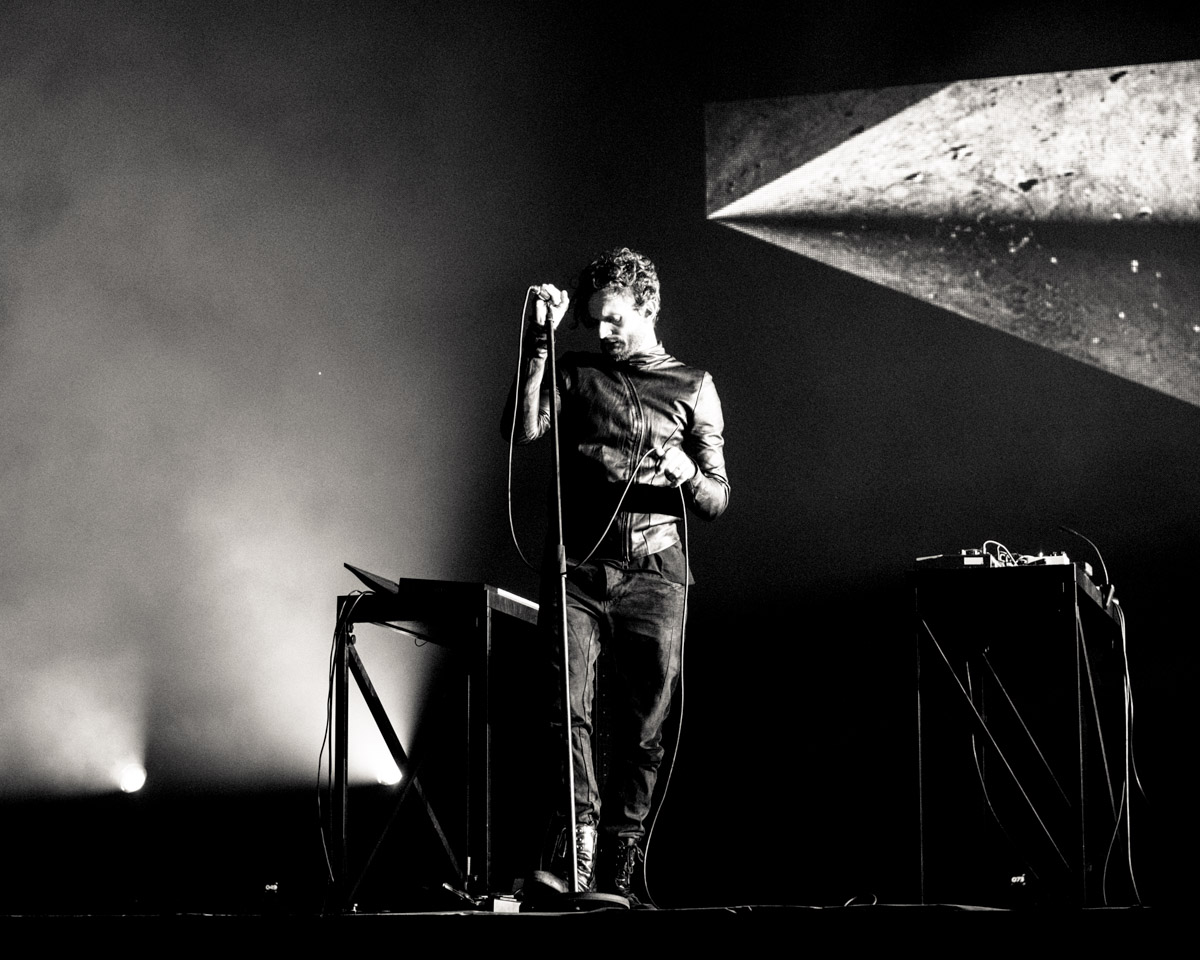 and Sascha Ring again, I am a big fan of his production and singing. 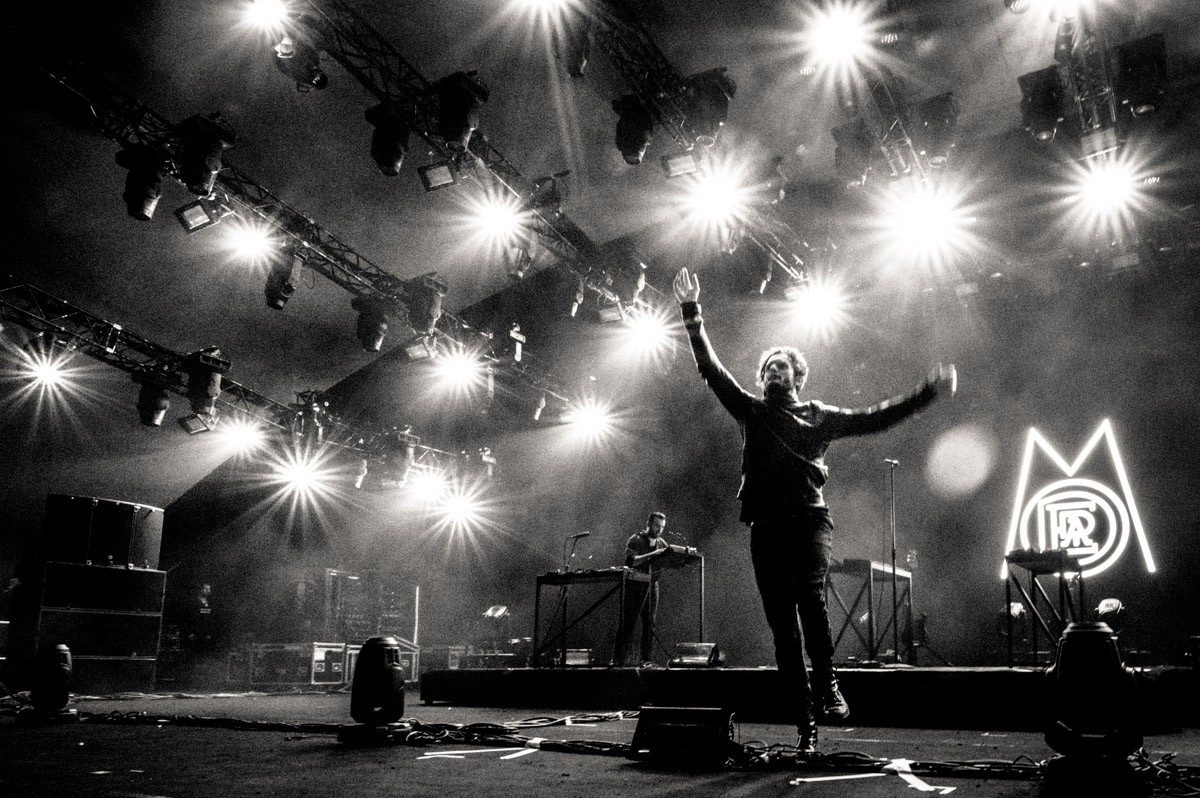 Sascha Ring goes to greet the crowd – avoids the cables! 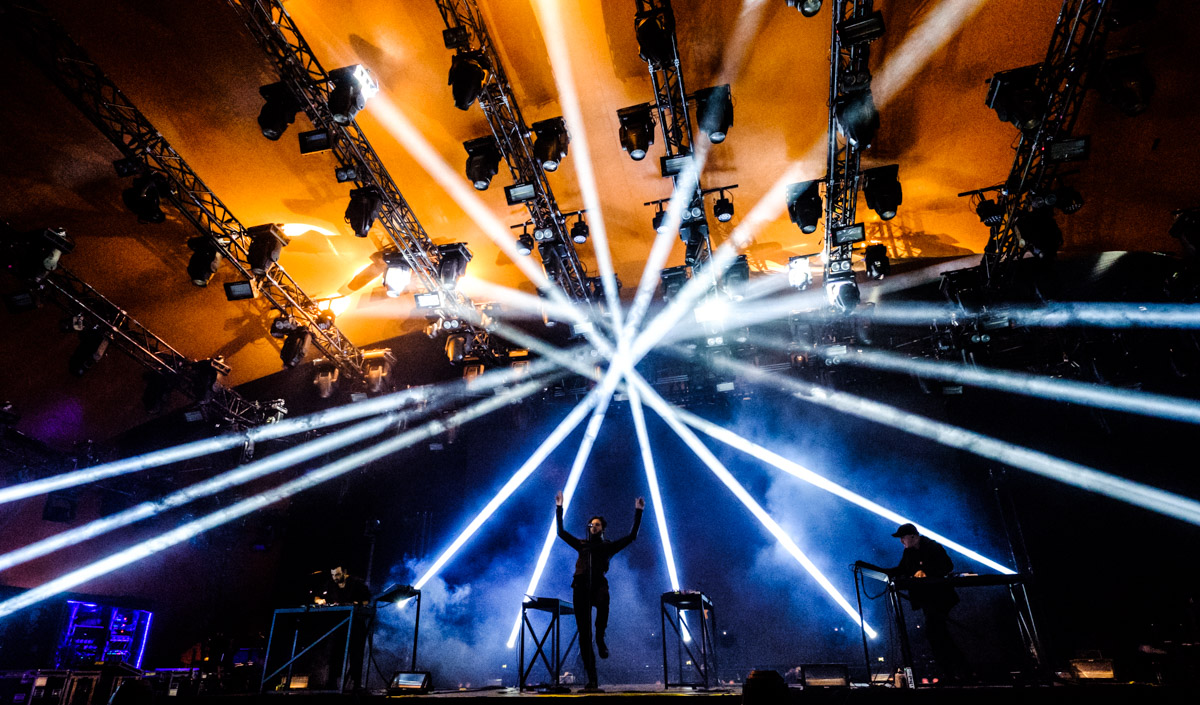 Oh EPIC – I know I have shown this before, but it is too epic not to repeat it! 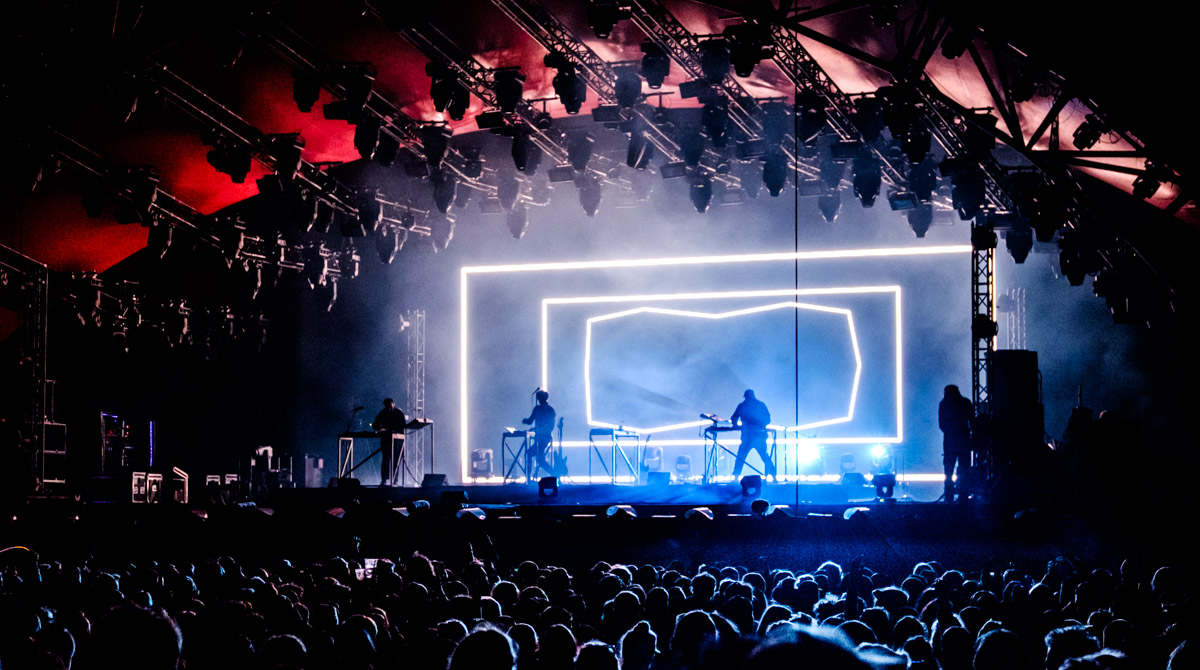 As normal we were allowed up in the pit for about 3 songs or so (luckily the Moderat tunes are long) – afterwards I enjoyed the whole concert down in the crowd for a change. 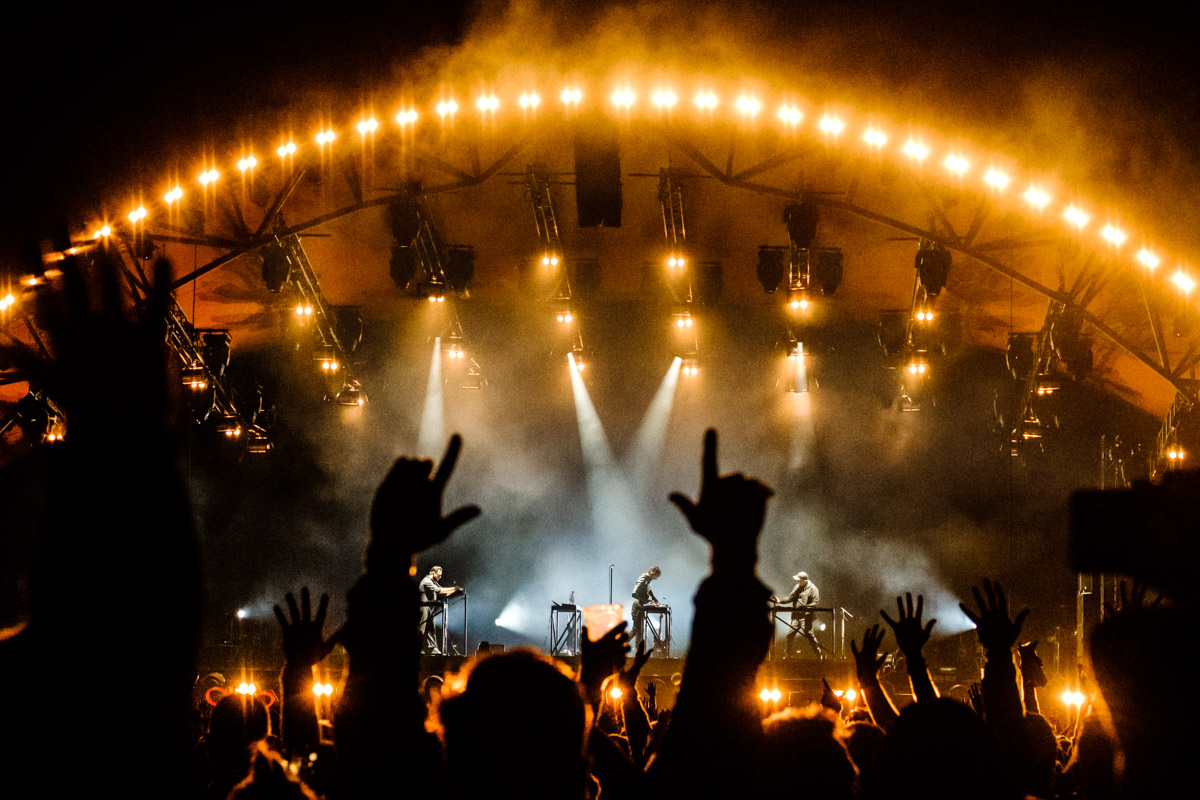 The Moderat concert is actually the only concert during the entire Roskilde Festival I heard in it’s entirety! And I loved every beat of it, so did the crowd.

The entire visual performance, created by the Pfadfinderei crew was incredible! 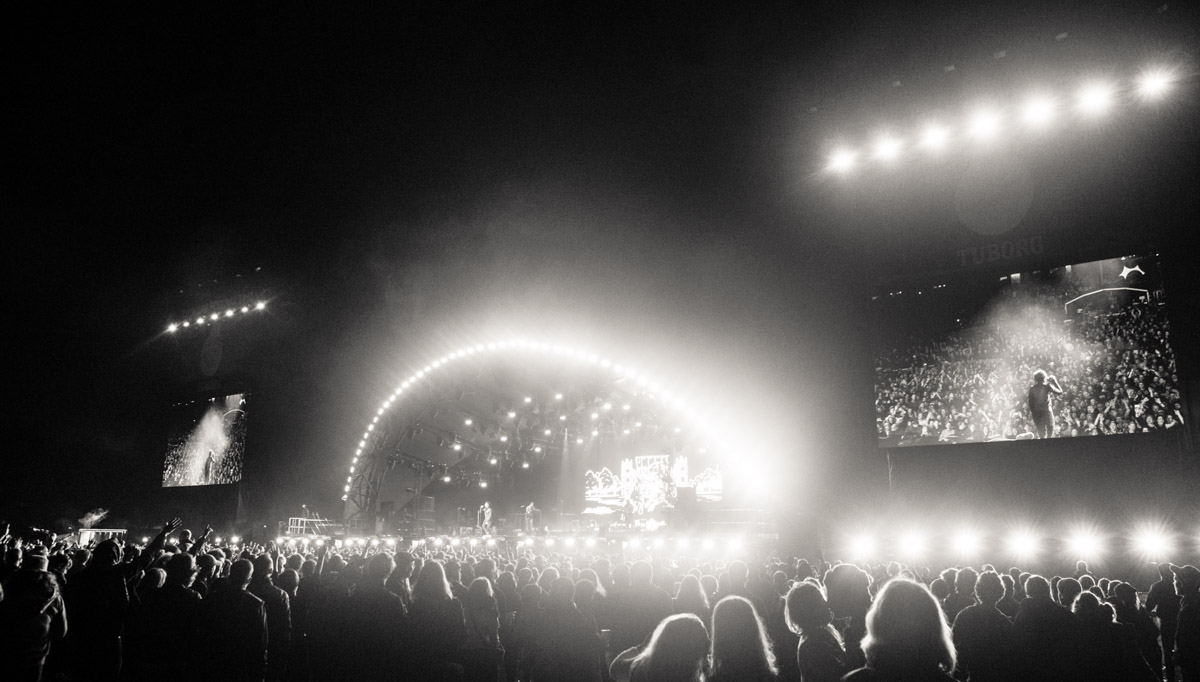 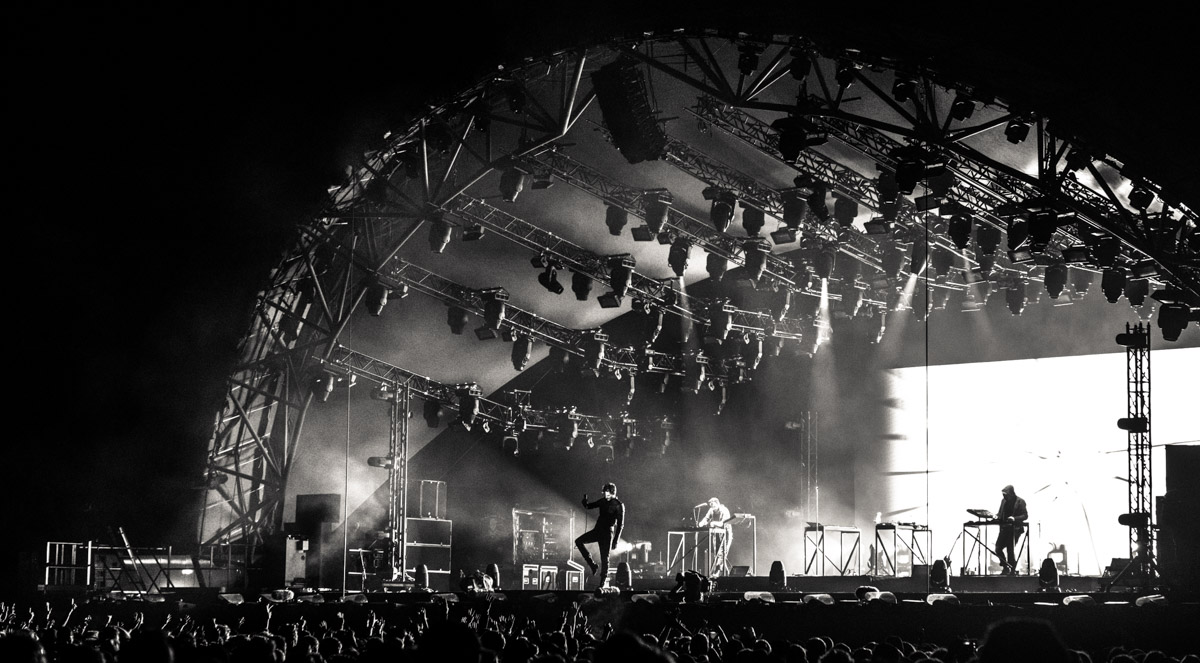 This is pretty much around the time Sascha Ring took one step in the wrong direction – into thin air – and fell into the photo pit! I was looking at him when it happened, it looked completely mad. It is almost a 2 meter drop so quite possible to get severely injured. His singing stopped while he fell, landed, then climbed back up, and resumed singing, apparently ok. 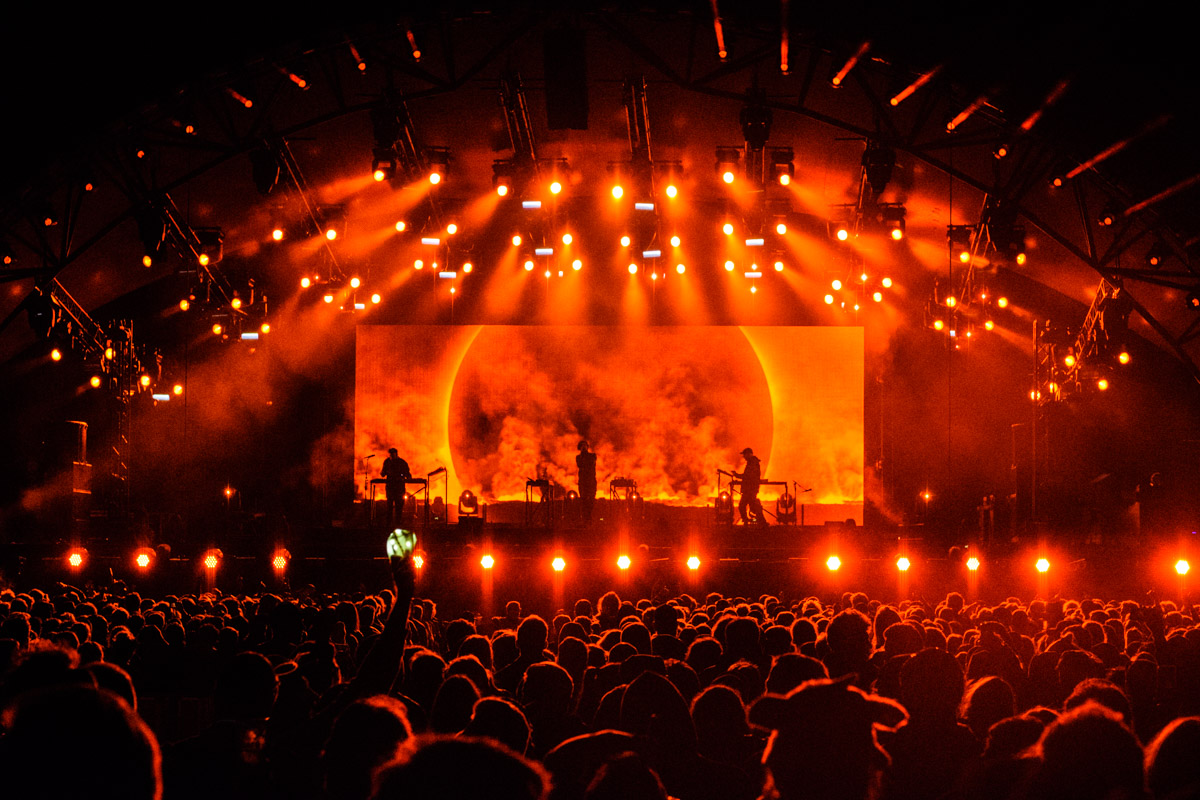 Moderat / Modeselektor – thank you for the magic

My last shot of the Moderat / Modeselektor show. Not the very last part of the concert actually, where the confetti canons was fired. I wanted to shoot that, but this is how I managed to not getting that shot: I had planned to photograph Sort Sol at 2am but Moderat was sooooo good I could not go anywhere. So I got to that concert too late to get into the photo pit. Ok, shot a few around the Arena tent. Then got cold. Bought some food. Went back to the Orange Stage. Waited and waited. Got really, really cold (my bones are not padded that well)…walked to press center to get coffee. Steffen, another Roskilde Festival team shooter, comes back, the concert is over and he had nailed the confetti shot. Me? “oh hi, my name is stupid, I am having coffee! And now I will go home.”. The end.

2 Comments on “Moderat on the Orange Stage at Roskilde”