Fandme Episk Productions are very proud and happy to release: Beyond — a 10 minute movie about my life as a gypsy, nomad, time-traveler, jedi. Directed, filmed and edited by Charlene Winfred. The movie was created by Charlene and yours truly in New Mexico and Utah, April 2013. Please make sure to watch it in fullscreen and HD:

Beyond – Making of the Movie

During 4 weeks of road-tripping in New Mexico in April 2013 I experienced this situation quite a lot: 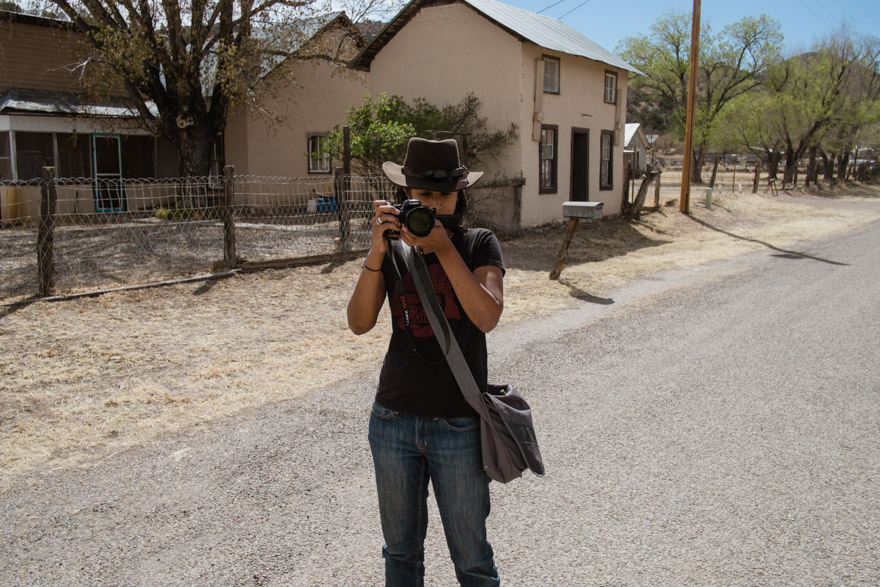 Normally this situation – Charlene pointing the video camera at me – was accompanied by the director saying things like “walk, stop, look left, shoot, stop, no go back, no don’t turn around, wait wait, too far, do it again, don’t look right, look at me, don’t look at me, turn around, walk away, you’re walking too slowly, too fast, quick quick, slow slow….no no do it again”. And in one scene where I am acting my freezing ass out of my pants in Monument Valley I got upstaged by an eagle and the director shouted “I am sooooo happy, a big bird just flew by”. Well, don’t worry about keeping the talent happy, compliment the wildlife! Actually the director’s face was frozen by icy wind so she said “bwig bwird jus fluuu baaa”. This is the first time I am starring in a movie and I must tell you it is hard work! I did not even have a trailer which I have been led to believe by Hollywood movies was a given for a diva star like me. It is also the first movie my director has ever made, although you would not know it – she really is an expert already at shouting directions at the star.

One evening, the director asked me to do the interview scenes, I said “you know, the star is tired, I have not much to say”. I then blabbered on non stop for more than 1.5 hours resulting in a nightmarish job in condensing this into the 10 minute voiceover. A small revenge for all the nagging while filming!

I did have an excellent movie star outfit which caused scenes and traffic jams wherever we went, and made us stars of towns like Truth or Consequences. My custom made truly fantastic leather boots from Guatemala, torn and worn rockstar jeans and old weathered Levis denim jacket (which used to be black, true story!) and some cool 10 dollar sunglasses from Walgreens. For 4 Mad and Magic Raving weeks in New Mexico, me and my diva outfit mosied epically around the New Mexico Land of Enchantment while the director tried to keep the talent’s ego in check. Most incredible fact about the movie: For 4 weeks, I never fell over being the movie star, Charlene never fell over being the director holding the camera. Falling over happens a lot normally, so this is incredible!

We cooked up the idea of a New Mexico road trip movie back in October/November 2012 and after a massive amount of work it is truly fantastic to present the final movie Beyond. I may be slightly biased as diva here is featured in basically every single frame – but I am extremely happy with the resulting movie and Charlene did an incredible job directing, filming and then spending 4 months working on editing the many, many hours of footage and audio.

The movie was filmed entirely by Charlene, all handheld even the amazing slow pans, and filmed on a Panasonic GH2 camera with a high bitrate firmware hack. I bought the GH2 used and with the firmware hacks (I used the Sanity 5 patch) it really does quite stunning film-like 1080p 24fps video for a camera that small and cheap.

A true labour of love, personal project, that we of Fandme Episk Productions very much hope you enjoy Beyond.

Fun fact: Years ago I posted this post “Further and Further” – a tongue in cheek movie poster about an idea we had for a movie about me. It is totally surreal and mindblowing that 3 years later we have actually made this come true! Well, just another entry in Journal of Impossible Things, hehe.