2020: Pandemic and an absolute shit year for all of us. But if you work in any type of event and/or music industry like I do, then 2020 is a downright disaster. The necessary shutdown of all events, all concerts, all festivals, all clubs has brought an entire industry to its knees, or worse. While life and work goes on for some, other industries are just pretty much dead or dying. I have friends in the travel industry and it must feel the same way. If you take travel+music that is something the entire world enjoys in one form or another and a huge amount of workplaces, people that are now left with no job. It is heart breaking to talk to all my friends in the industry and hear how they are suffering and on the brink of closing or giving up. Yes, it is absolutely necessary for now to avoid close contact to reduce the risk of spreading covid-19, I am not debating that – but if we want these industries to survive they need help. If you ever want to go to a concert and a festival again, the entire food chain in the music industry need support from the governments and from all of us.

My experience as a music and event photographer since March 11 and the lockdown in Denmark is that the loss of income hurts and is scary. But what is equally hard is the loneliness and loss of identity. I am trying to become some sort of octopus, do video, do all kinds of things to be able to pick up the odd day job here or there. But the core identity as a music photographer is lost. And the loneliness. Borders are closed so my girlfriend Charlene and I cannot see each other. It has been an unreal 8 months. At least we are safe and well in two very safe countries, Singapore and Denmark. Professionally, not going to gigs all the time means not seeing any of my colleagues, fellow photographers, light and sound techs, event and venue crew etc. I need to reinvent myself completely, I know, but yeah. One day at a time. It is bloody difficult times.

But that is why this week in August with Strøm was special. Strøm is a Danish organisation for electronic music and among many other things, organisers of the yearly Strøm electronic music festival. A festival I have photographed for 8 years since 2012. Check out my Strøm blog post from 2018 for example of all the creative events Strøm usually organises.

Strøm had a whole program ready, an entire festival ready to announce back when it was definitely announced by the Danish government on April 6 that the entire Summer of festivals would be cancelled. Strøm had to either cancel or completely re-invent the festival to be able to run under the new restrictions. I am so grateful that Strøm managed to reinvent the festival and actually  pull off a hybrid digital/live music festival in the year of corona. Personally I had a whole week of event photography work and that special festival feeling! A Music Festival in the Year of Covid-19, here is how it happened.

I started the week on a Monday – hey it is Corona 2020, time has no meaning, weeks can start or not start whenever! Where was I? I started the week by going underground. Literally! I documented the entire production day of Danish legendary Techno producer Kölsch recording a concert in the former underground aquifer turned art gallery called Cisternerne in Copenhagen. I wrote a whole blog post about this day, click to read Kölsch in Cisternerne. Here are just two pictures from a totally outstanding day. 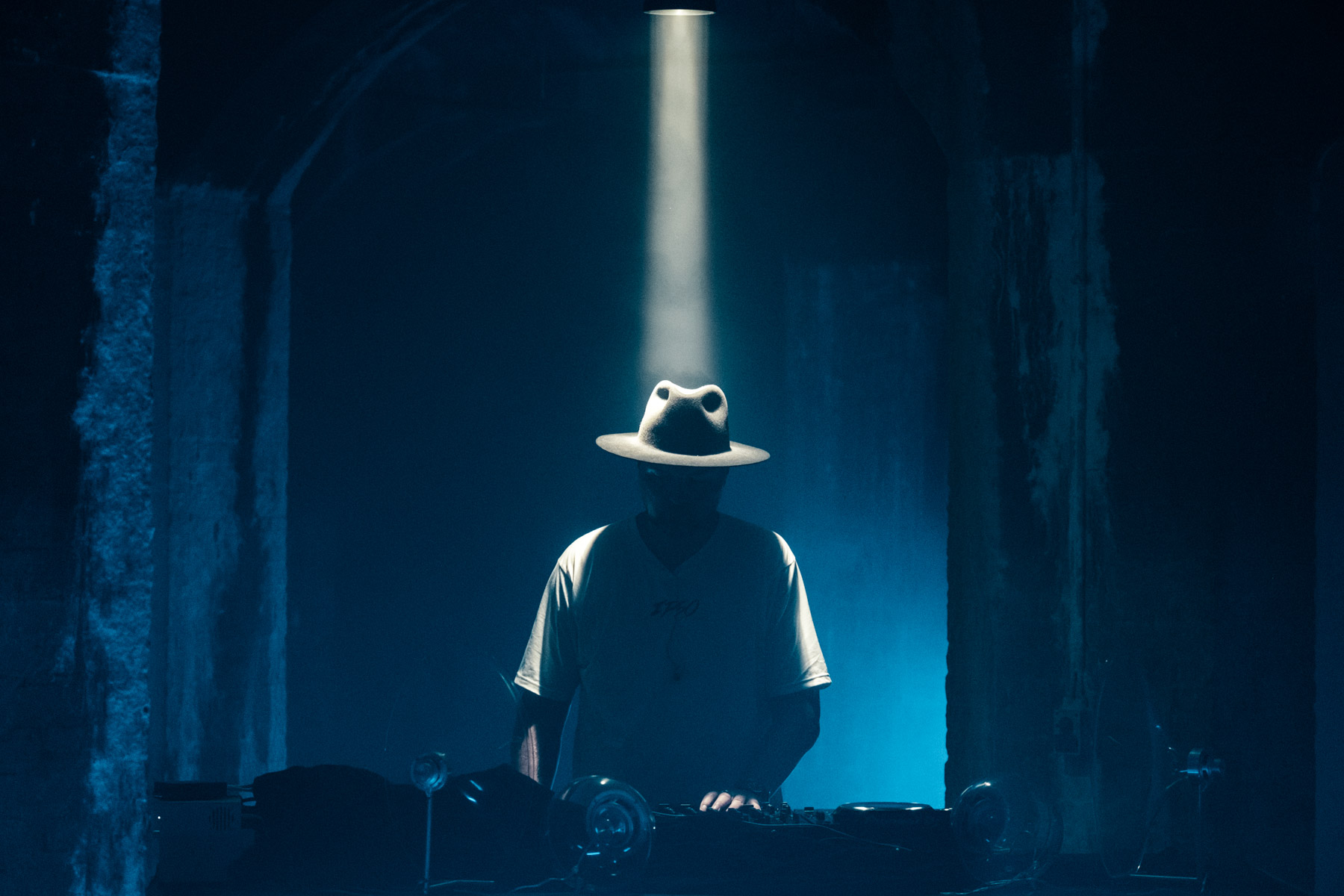 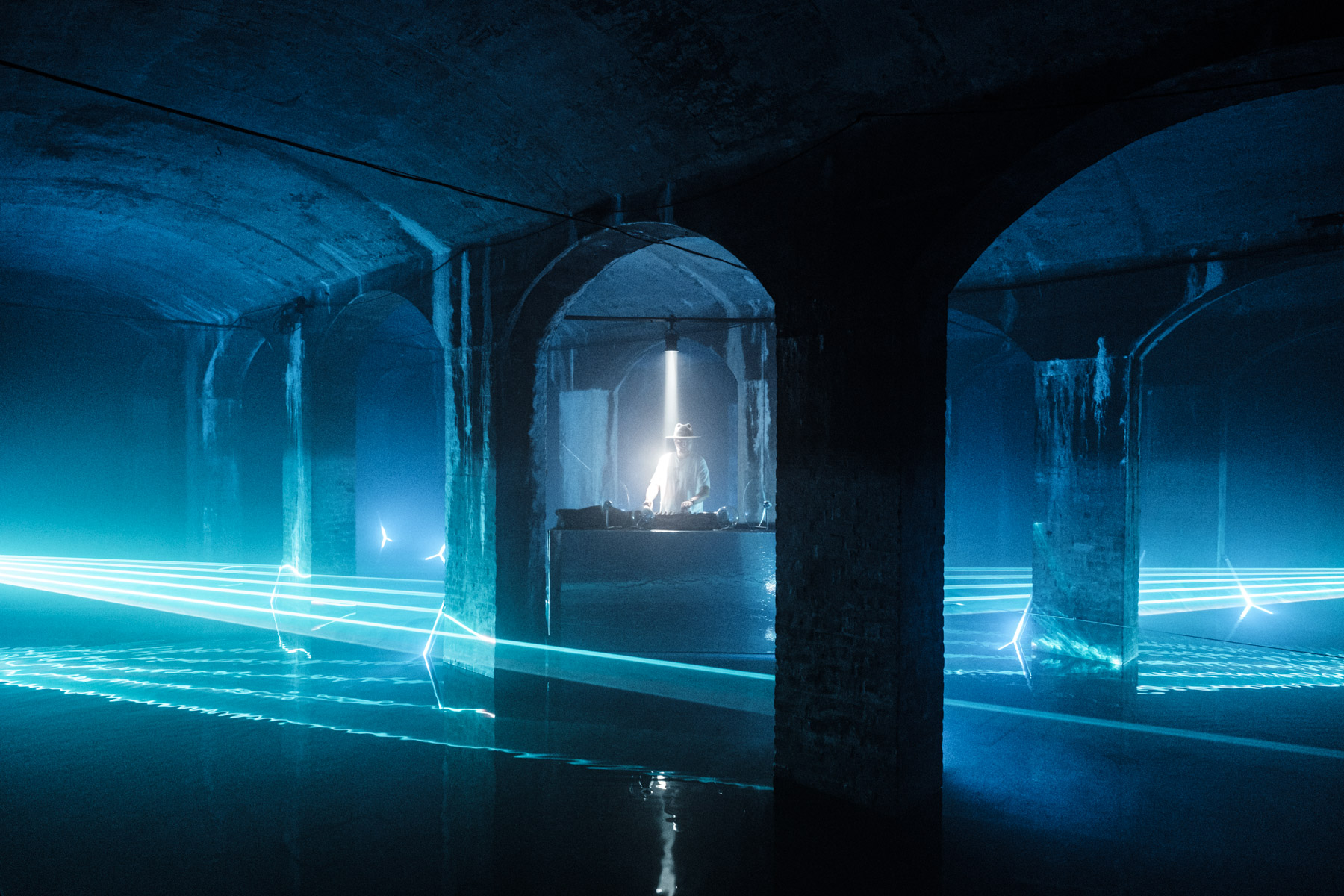 The following day I documented the video recordings of two videos for Strøm for Børn (Kids). Strøm for Kids is a wonderful part of the Strøm organisation that travels around to schools and teaches kids the wonderful creative joy of making electronic music on an ipad. This was another super enjoyable day and quite the contrast, spent Monday freezing in 8 degrees and almost 100% humidity underground and spent Tuesday sweating inside studios during the heatwave in 30+ degrees! 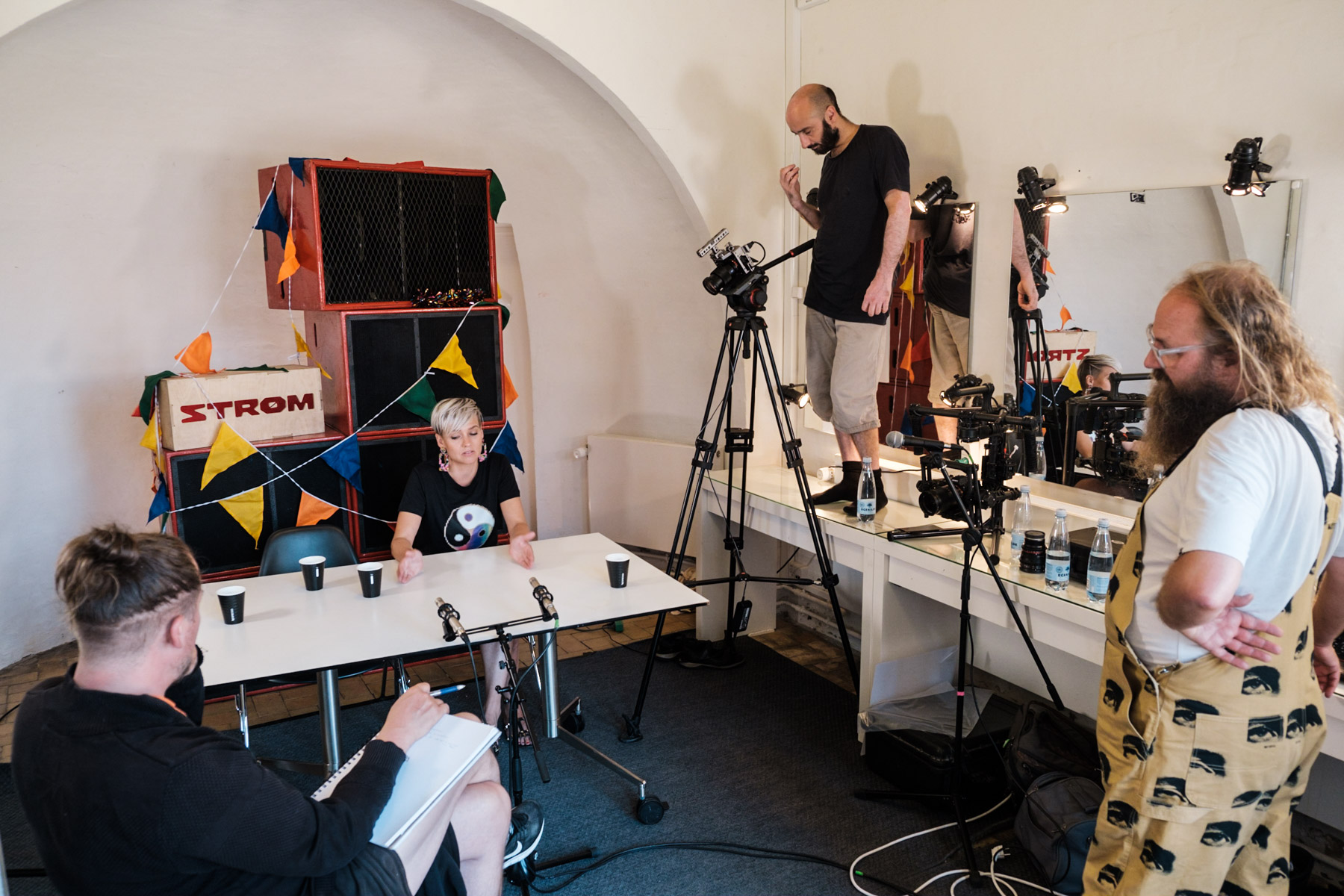 Strøm for Børn also arranged a concert for a small group of kids from the dance school where we filmed. ‘Strøm Rave for Kids’ was an absolute riot, so much fun to document – and those kids are great dancers! 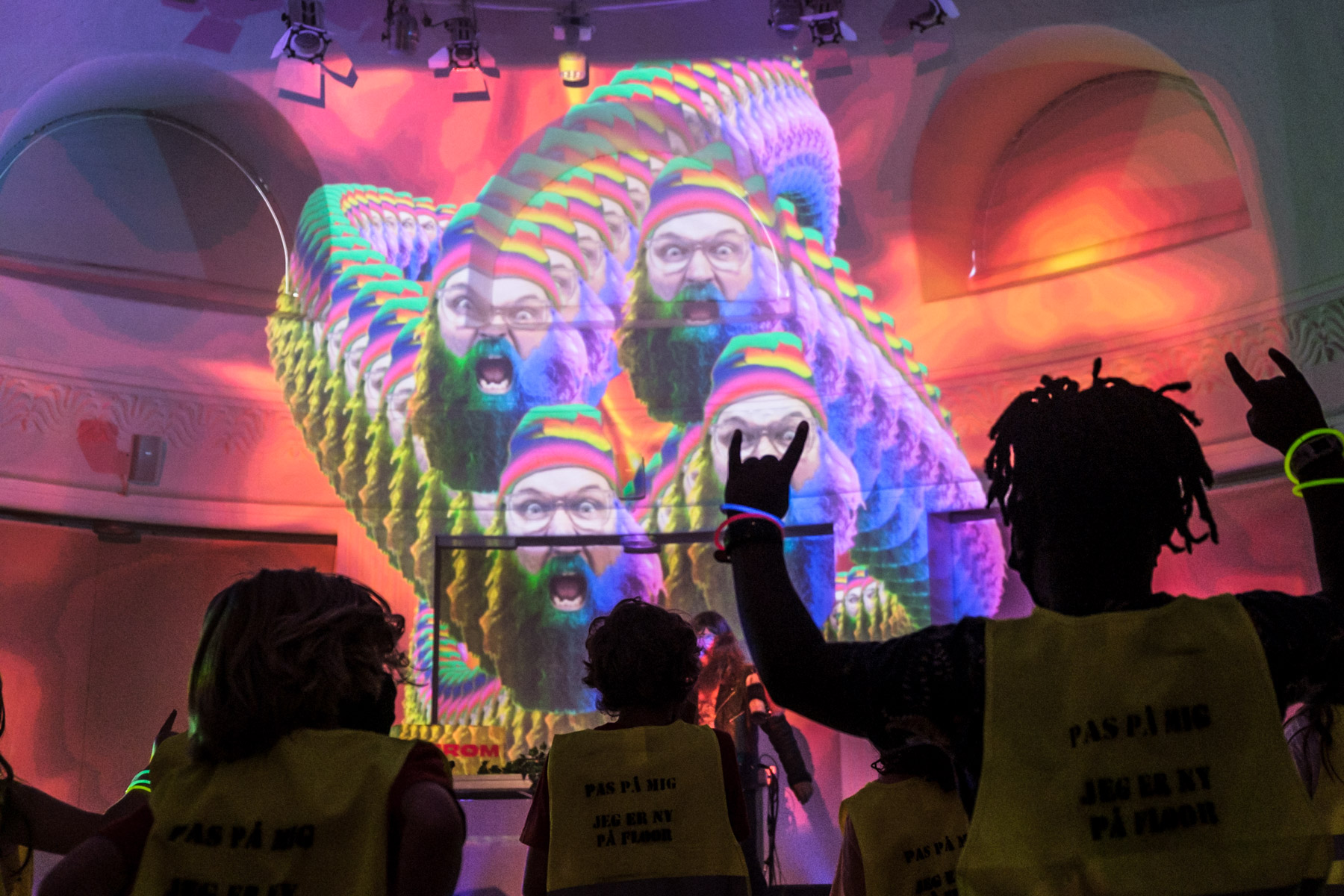 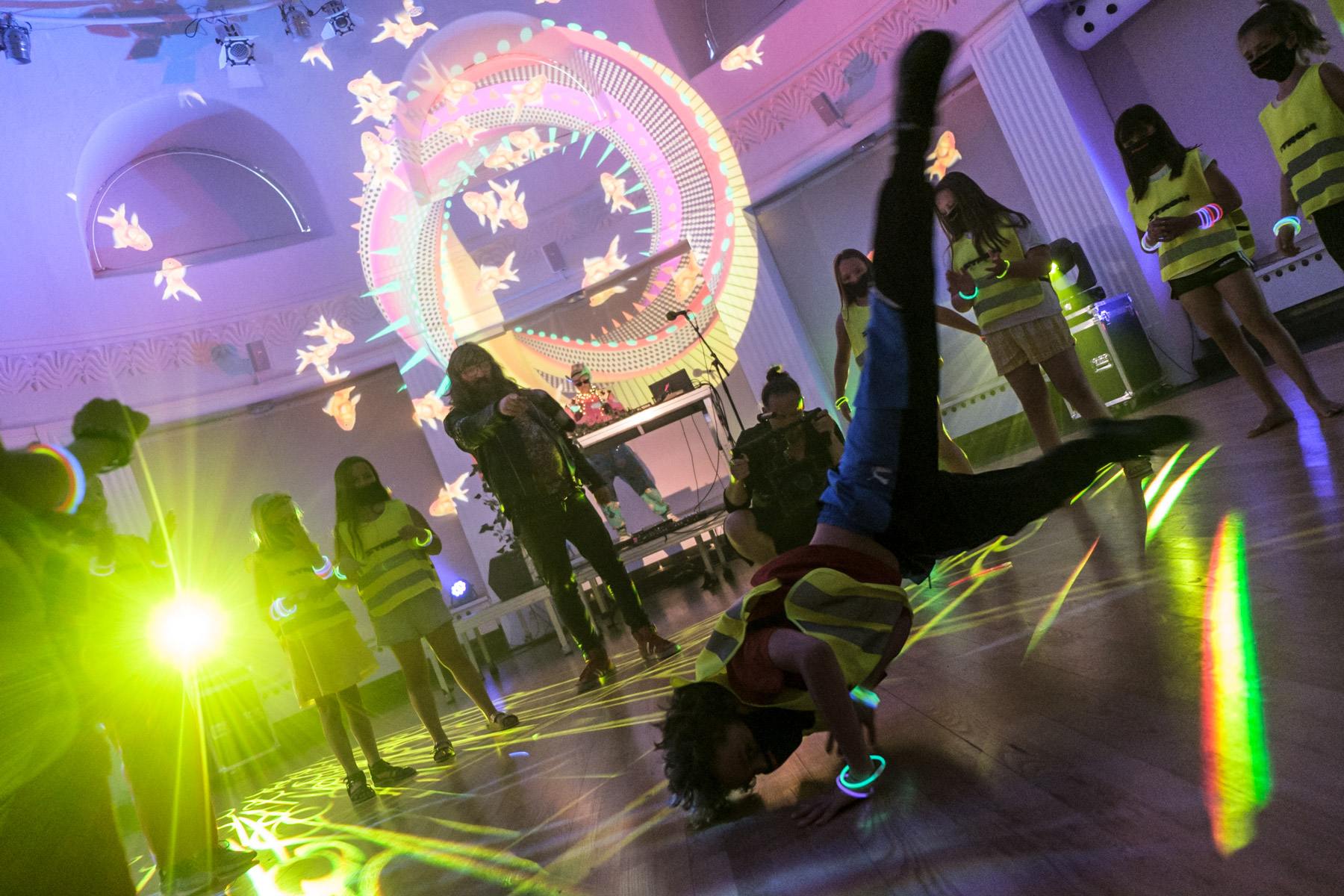 This was the actual opening day of the festival, and one of the few ‘live’ events with an audience. Of course, Strøm could not do actual concerts like previous years, but instead they came up with a great new concept for the opening: Strøm commissioned 3 Danish electronic music producer to create an audio/visual experience that reflects on what it feels like, what life is like as an artist during Corona lockdown and shutdown of all live gigs meaning pretty much all income. These 3 pieces were they played in a cinema in Copenhagen for a small crowd with a small talk by the artists and Q&A session afterwards. This worked remarkably well, we could have easily watched 10 x audio/visual pieces, watching music videos in a cinema with a crowd of music lovers is really cool. You can watch all 3 videos and listen to the music here on the Strøm site: https://strm.dk/audio-visuel/ 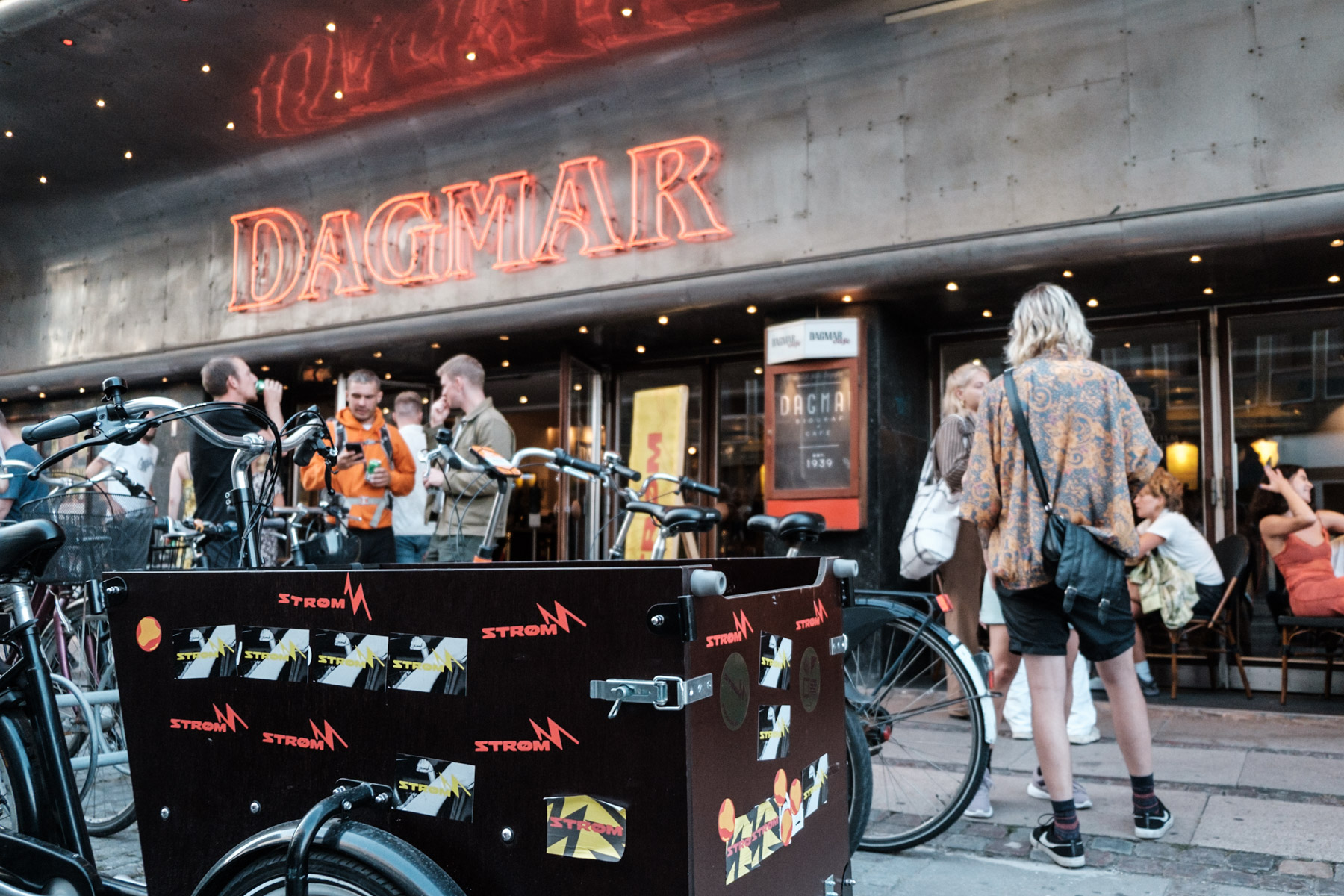 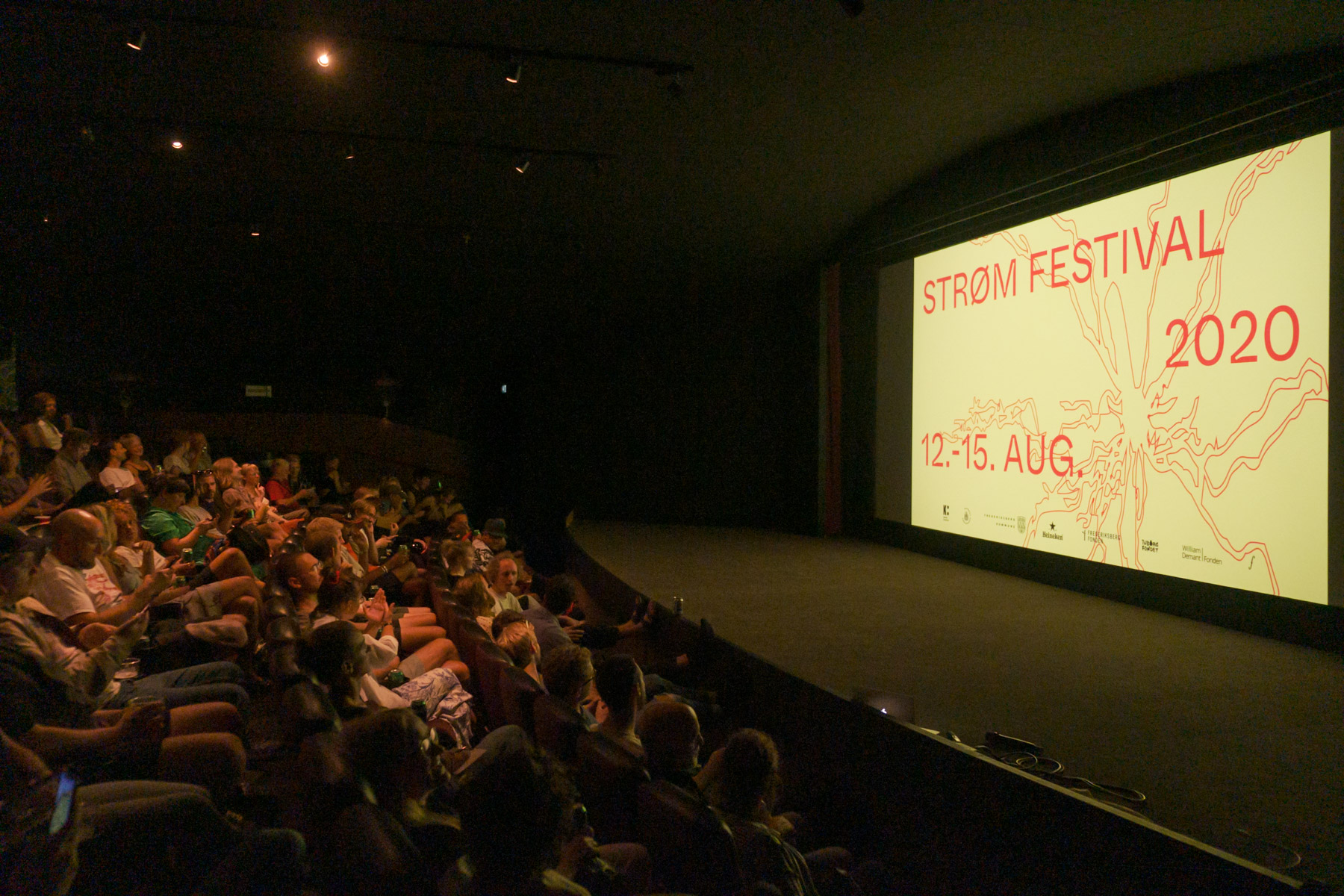 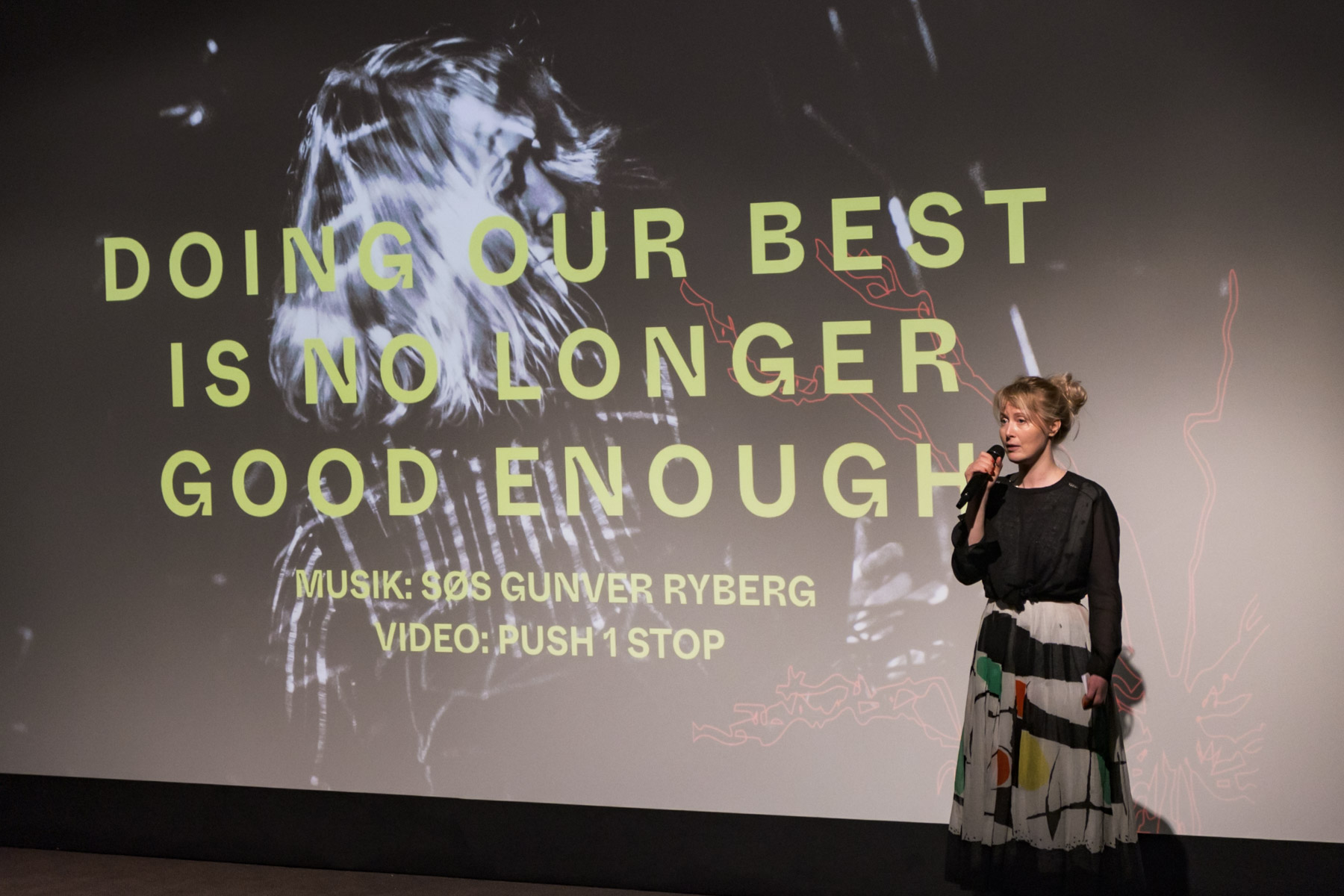 SØS Gunver Ryberg talking about her work for the event. That is my portrait of SØS on the screen, it was cool to see it on a cinema screen. 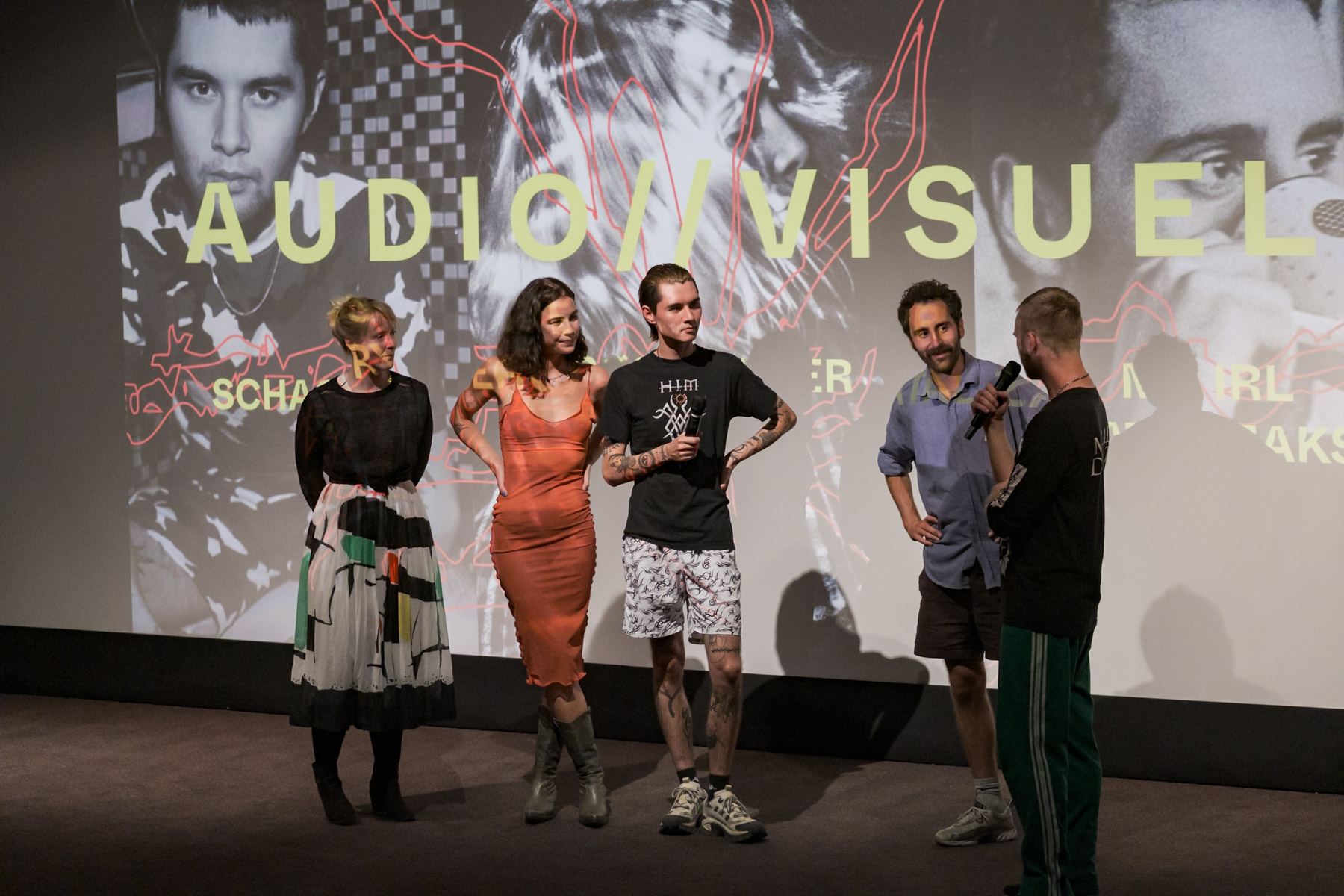 All the artists on stage for a Q&A session 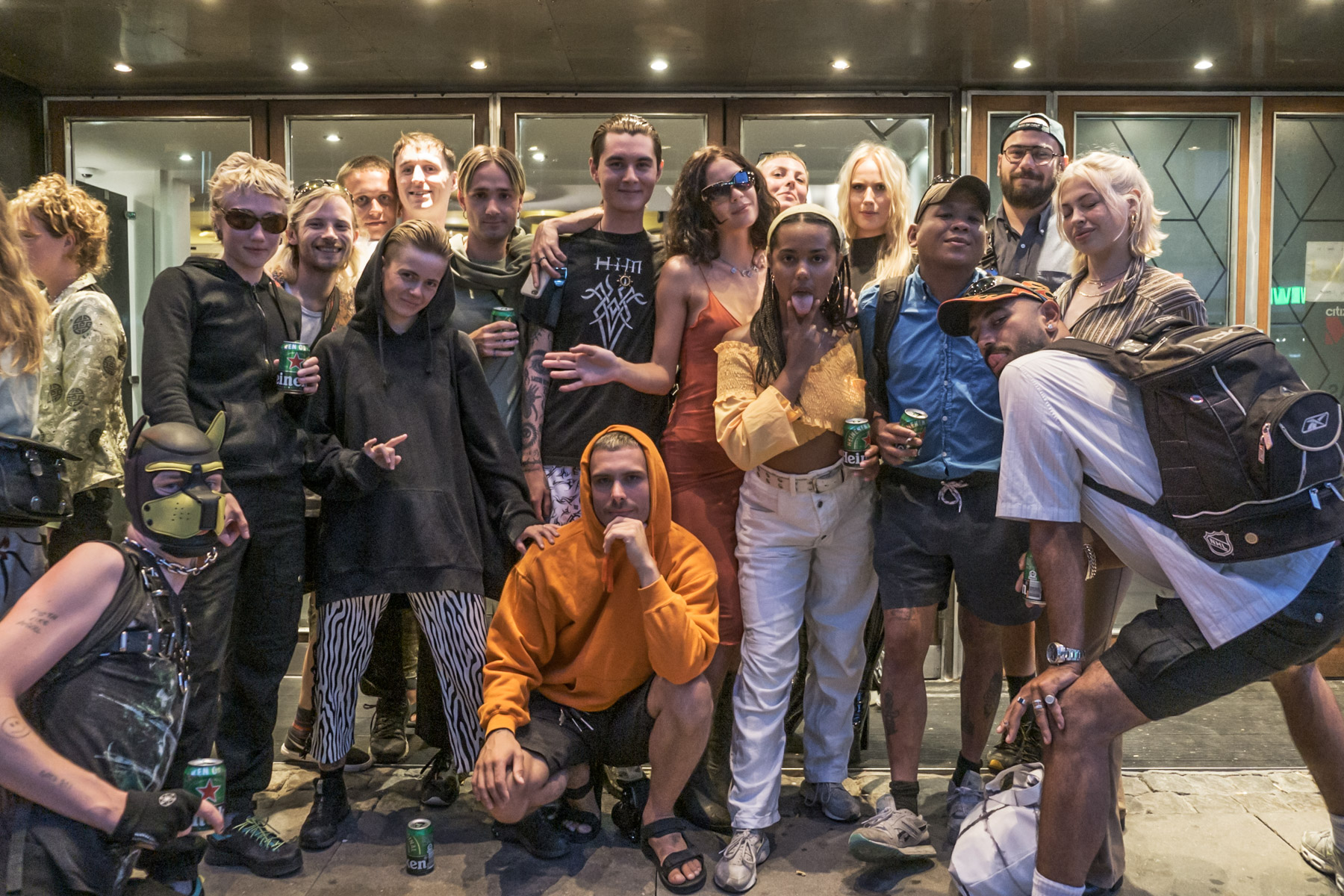 Another stinking hot Summer day, it started with some interesting talks and workshops. The picture below is a talk about the club and concert culture being under great pressure, of course now because of Corona but even before that as well. It was super interesting and inspiring also to hear these independent promoters talk about the incredible effort they pour into putting on events and parties. 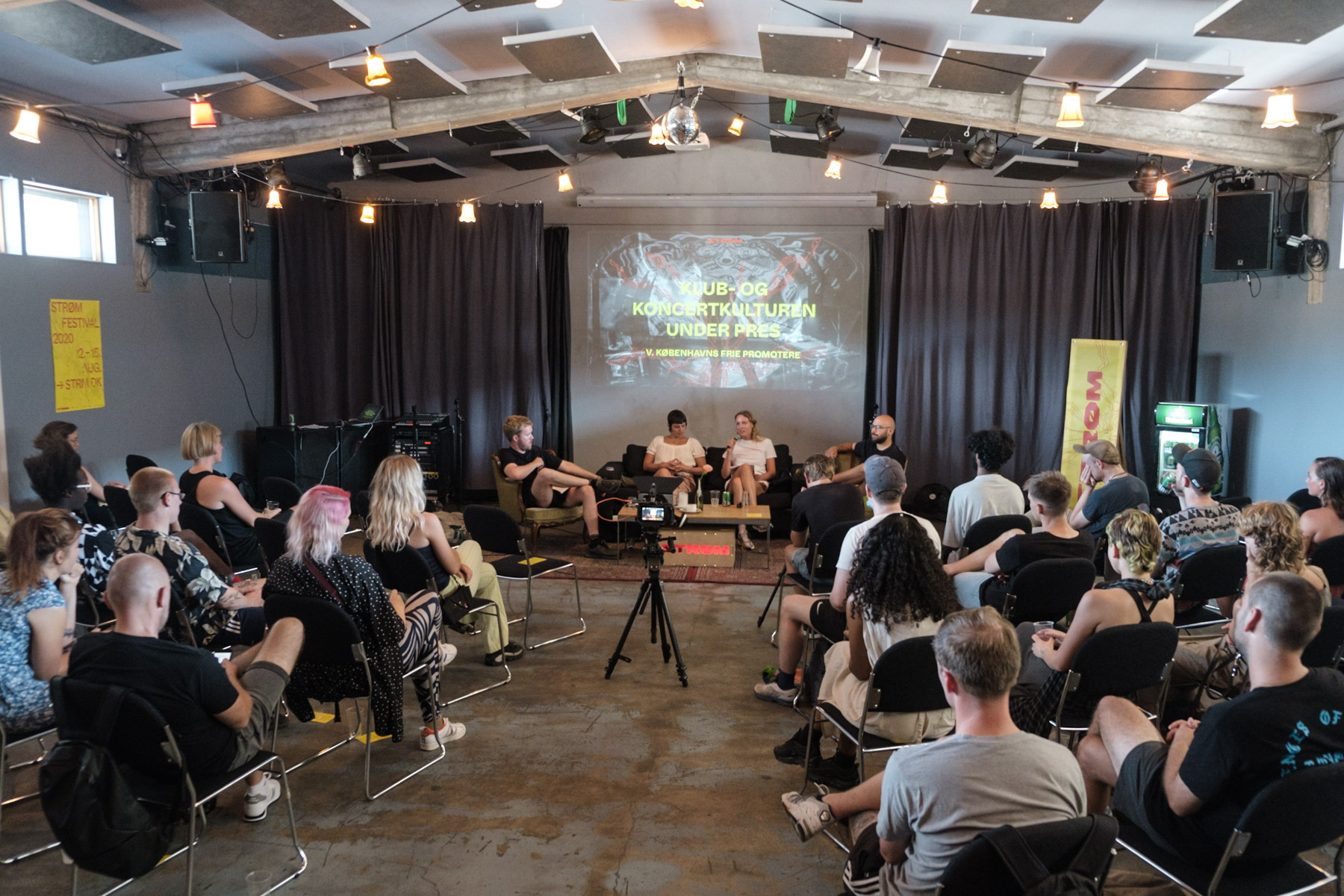 Several talks and workshops took place during the festival

The next part of Thursday was a rave bus trip, a double length bus with a very small group of people on board, in full protective rave gear, mask and suits. Peckerhead played a mad hardcore set at 180bpm and it was quite the ride. Insanely hot again, and I got a bit car sick, nothing like trying to make pictures looking through a viewfinder on something that is moving to really screw up your inner ear! 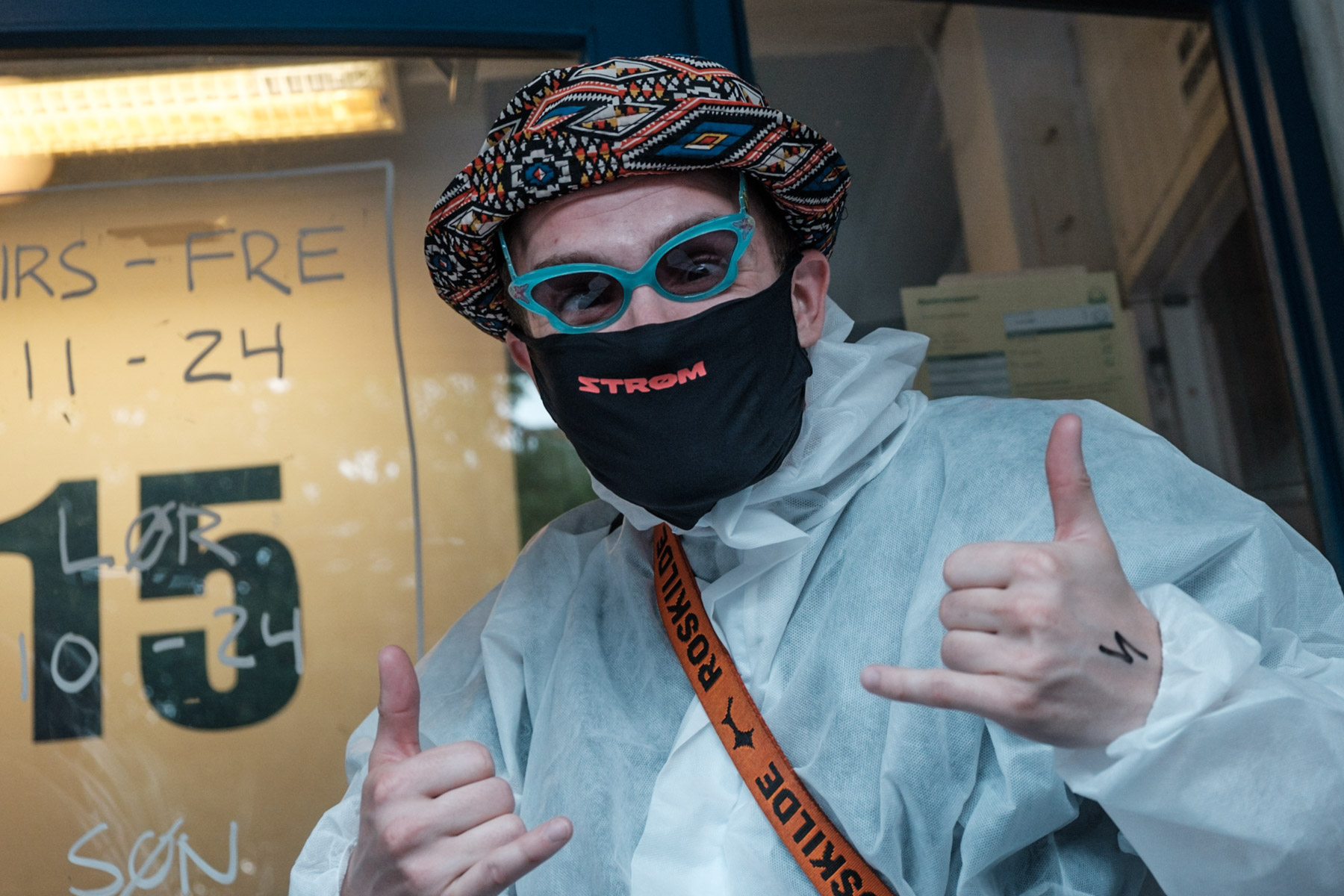 One of the ravers all suited up for the gabber bus rave! 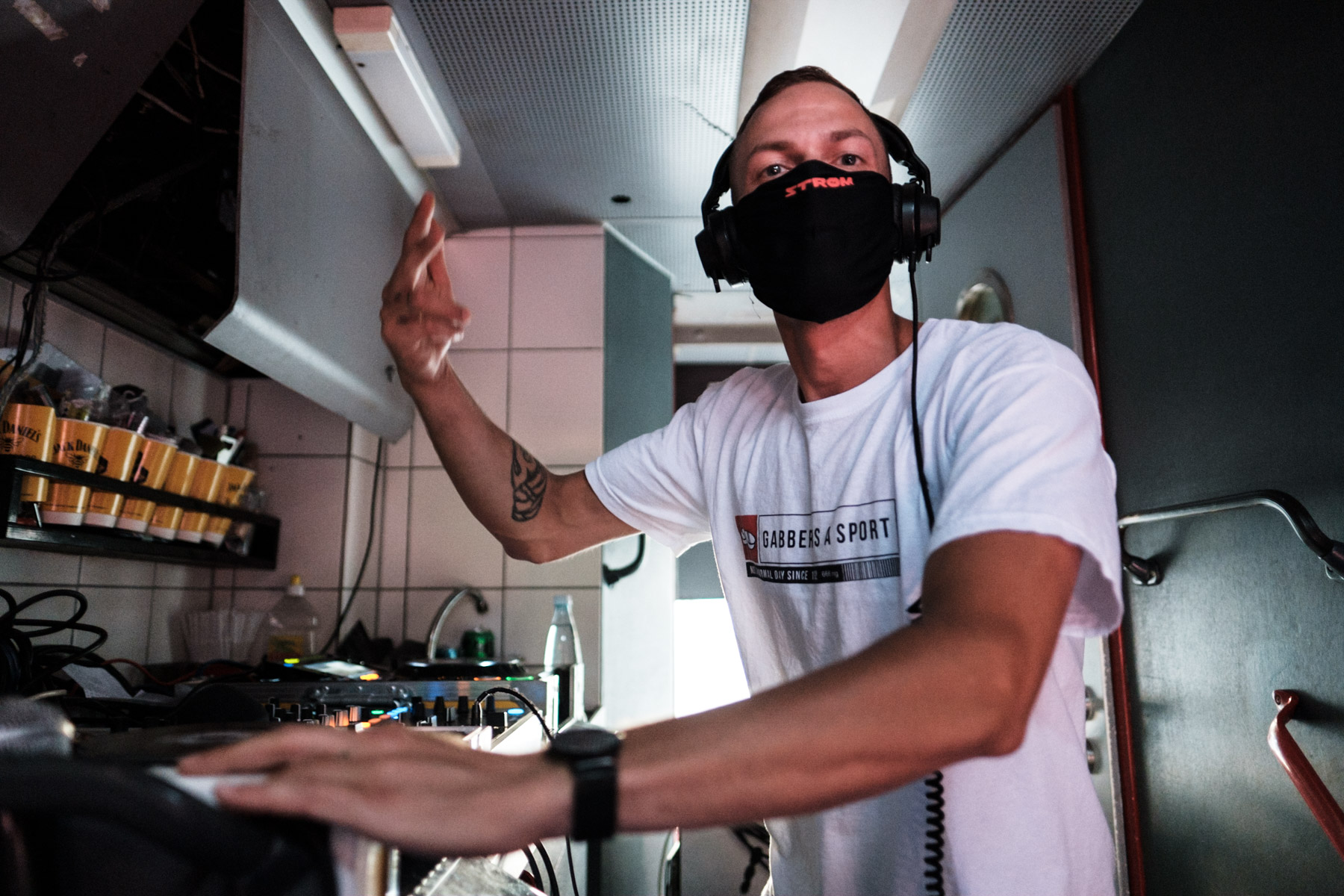 Peckerhead hammers out some 180bpm in the bus! 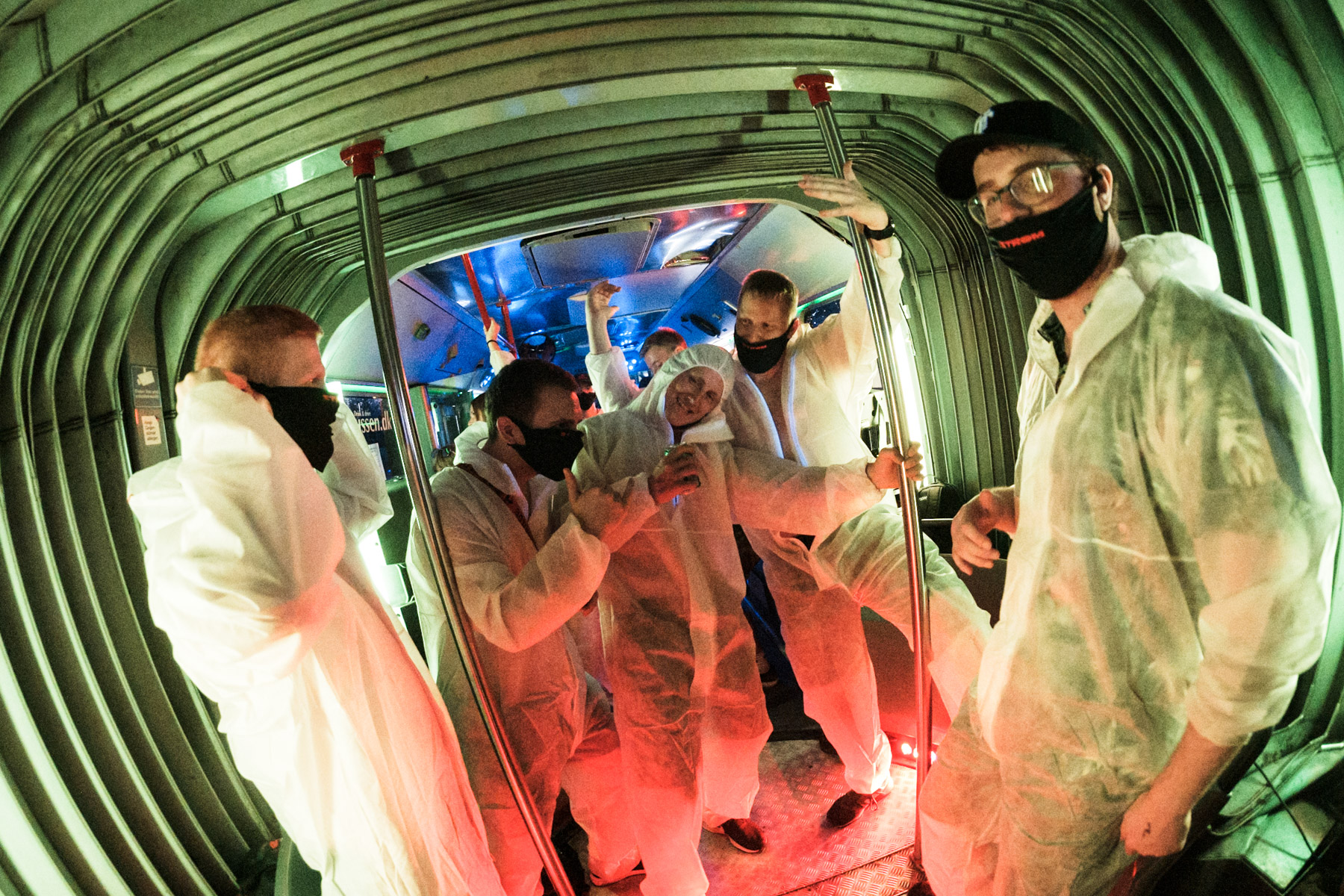 Ravers on the bus 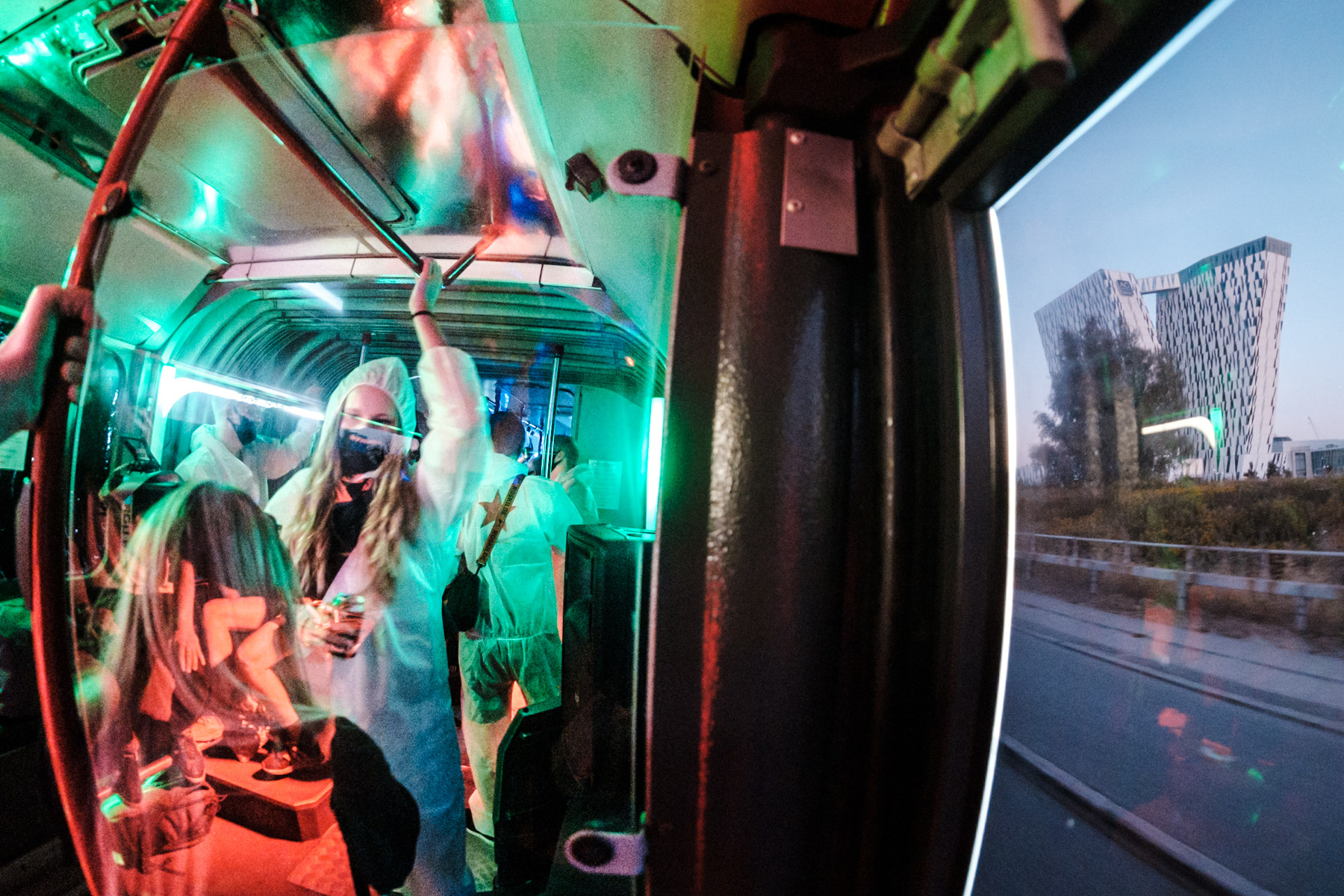 Ravers on the bus and passing the Bella Sky hotel

Friday was a day off for me as there was no events to document.  Friday was used for releasing online events by Strøm, several pre-recorded masterclasses by producers such as Lil Høg and Eloq that you can watch here.

The day of the great football championship, Strøm Rave Cup! A street football competition between teams made up of various electronic artists, promoters, event crews etc! Music for the competition was supplied by legends 2000F and Fergus Murphy, and Raske Penge did the commentating – which was absolutely hilarious, Rasmus was in top form and I am not sure he really knows anything about football but he did not let that stop him at all and it just added to the fun.

This was actually my first ever football game that I have photographed! It was fun and challenging, and my main lesson was this: In street football, things happen really fast and really close to you so when you stand next to the goal to get the action shots – you experience a shitload of scary near-misses and a few not-misses where you actually get hit by the ball! I then moved to behind the goal, shooting through the net, problem solved! Still scary though! Seeing the ball fly at you through a viewfinder is an interesting adrenaline kick! I don’t want my camera smashed into my eye! 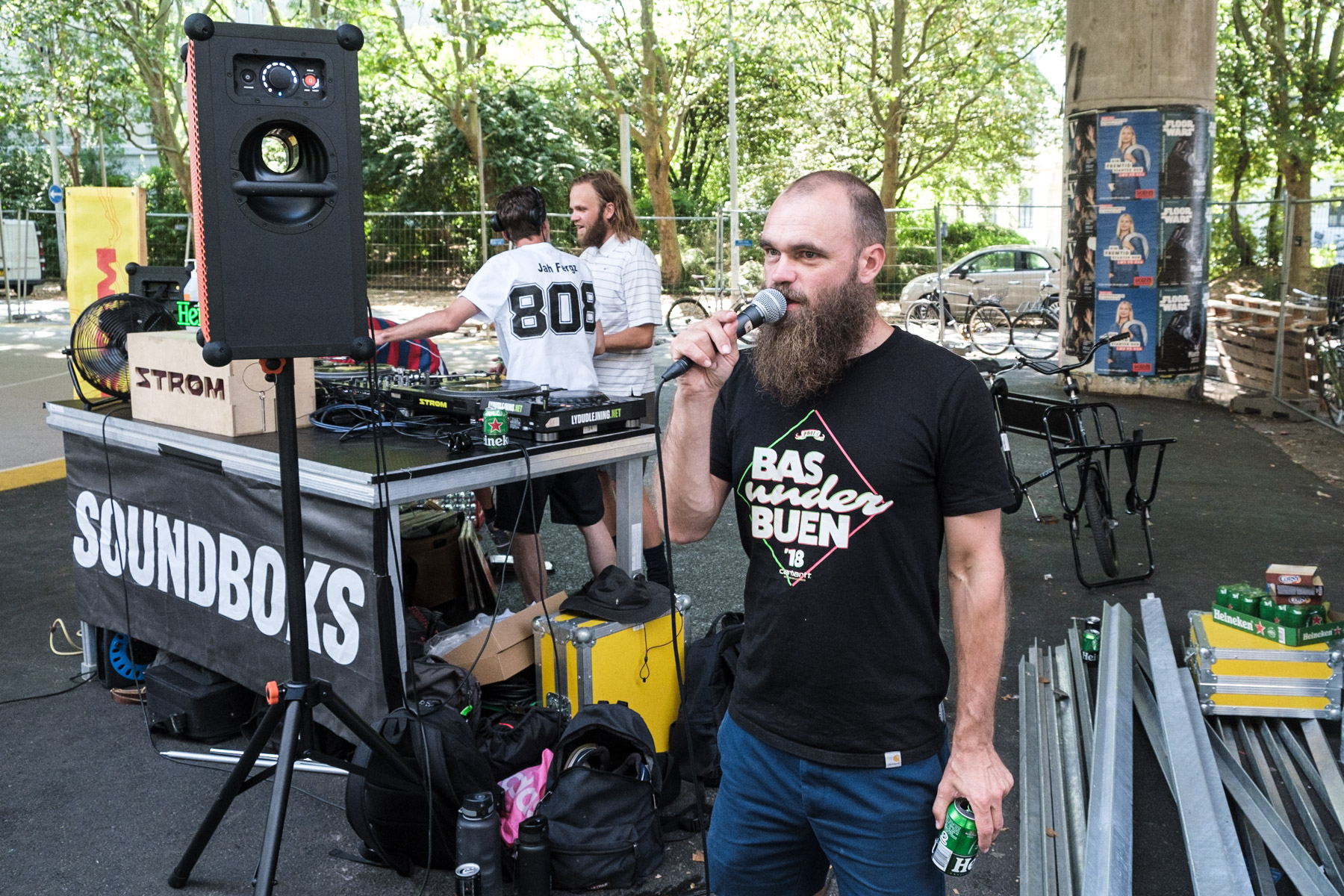 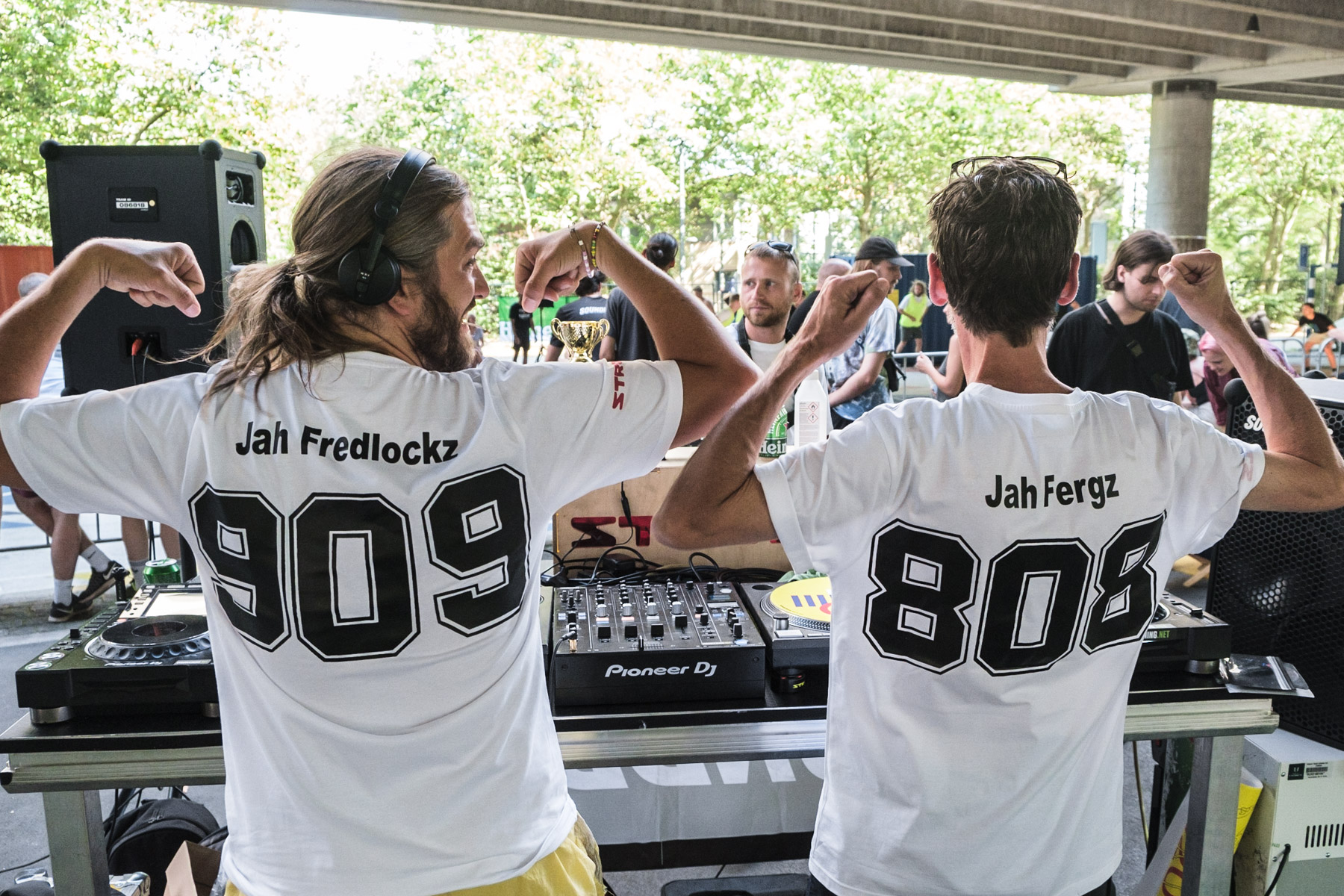 My great friends Frederik and Fergus playing wicked tunes in the best football jerseys ever! 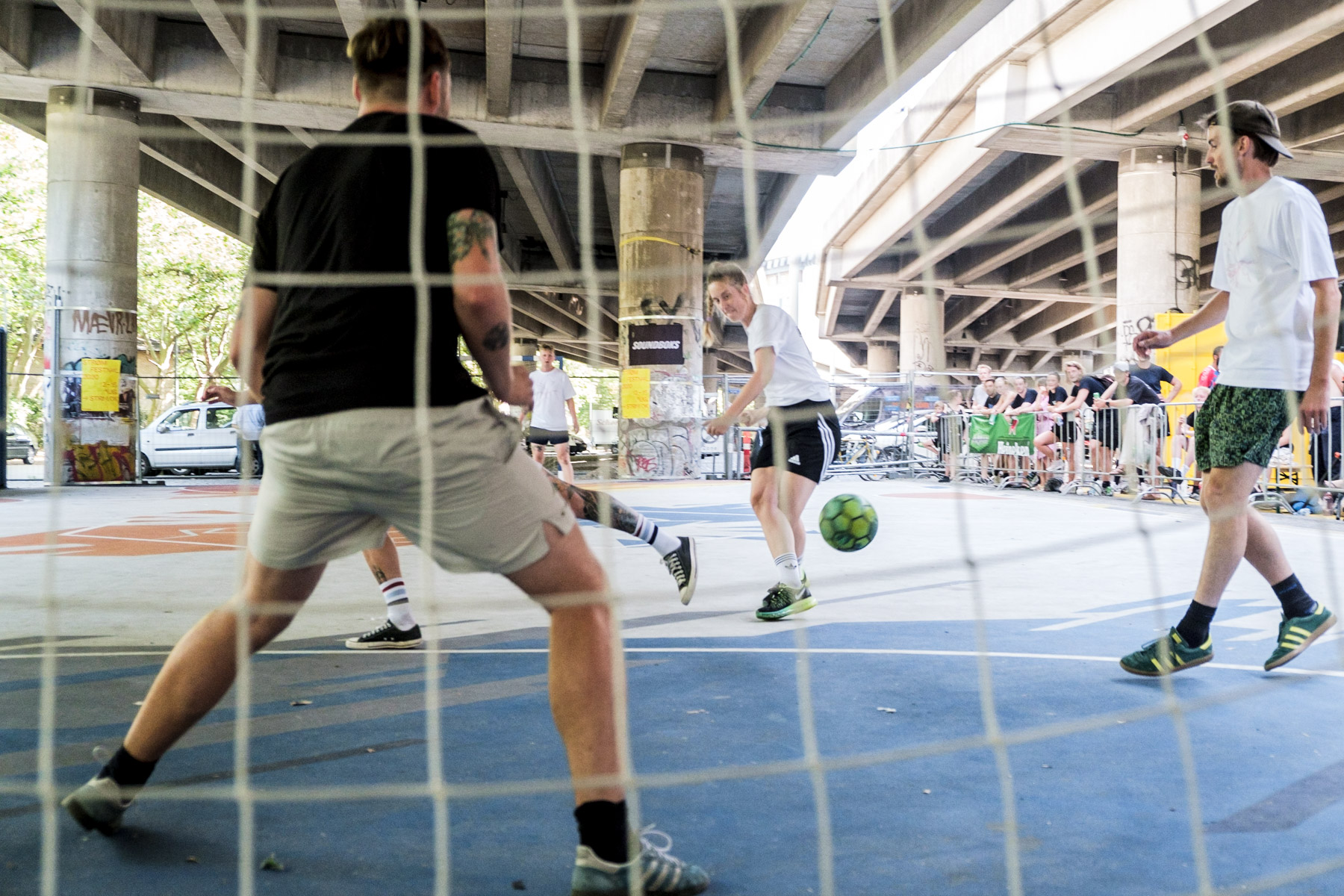 Standing behind the goal in reasonable safety! 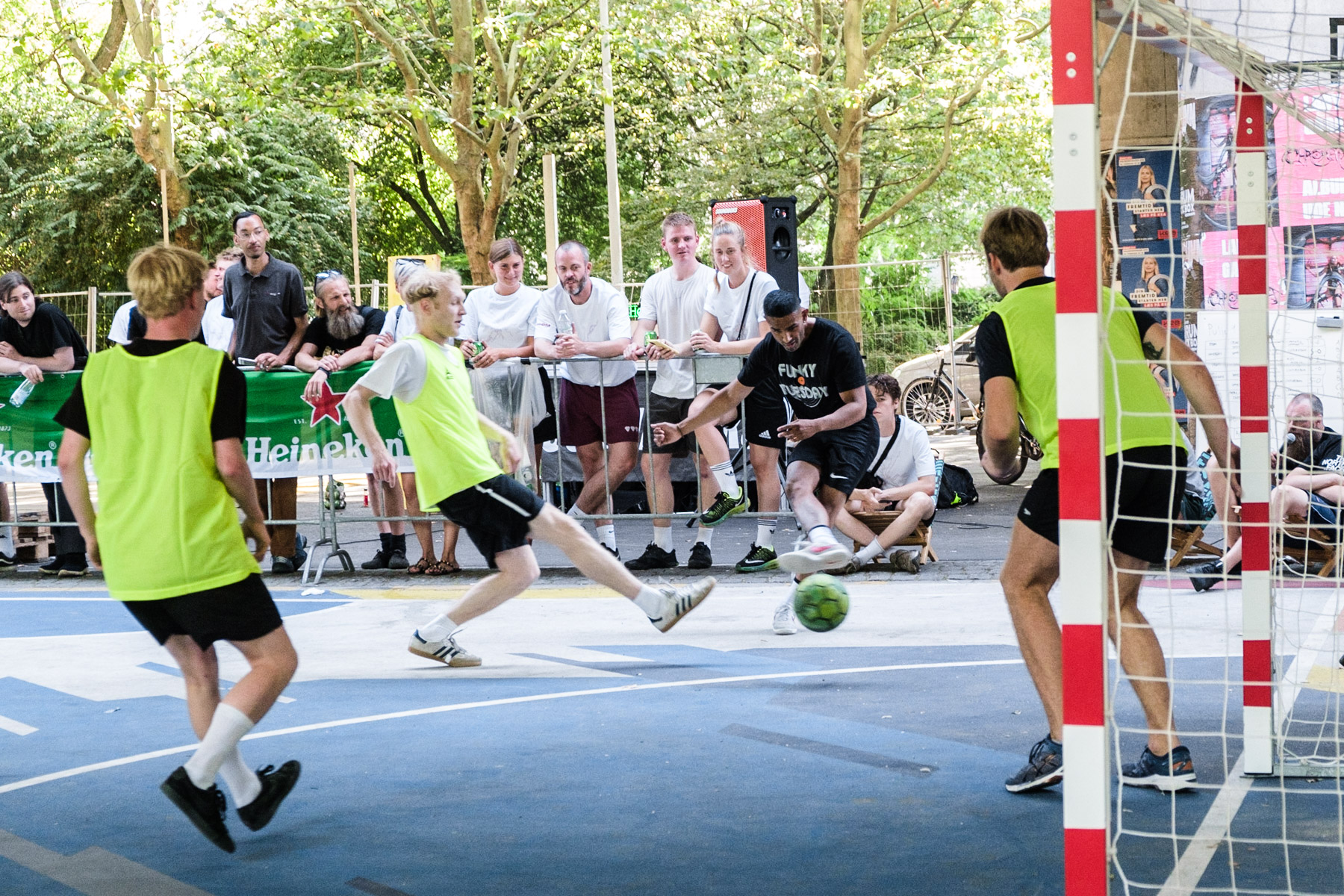 Standing next to the goal and getting hit by the ball a lot!

Saturday evening ended with a private housewarming party for the Strøm crew at the new Strøm office. We sat outside eating and drinking till late at night in the courtyard behind the office. During the heatwave it was still super warm at 3am outside. It was a little slice of magic, and a nice reminder that life as we know it in the electronic music industry has completely changed but there is still a lot of wonderful creative people, used to adapting to ever changing circumstances and at some point we will be able to all be together again in a big crowd, celebrating music. 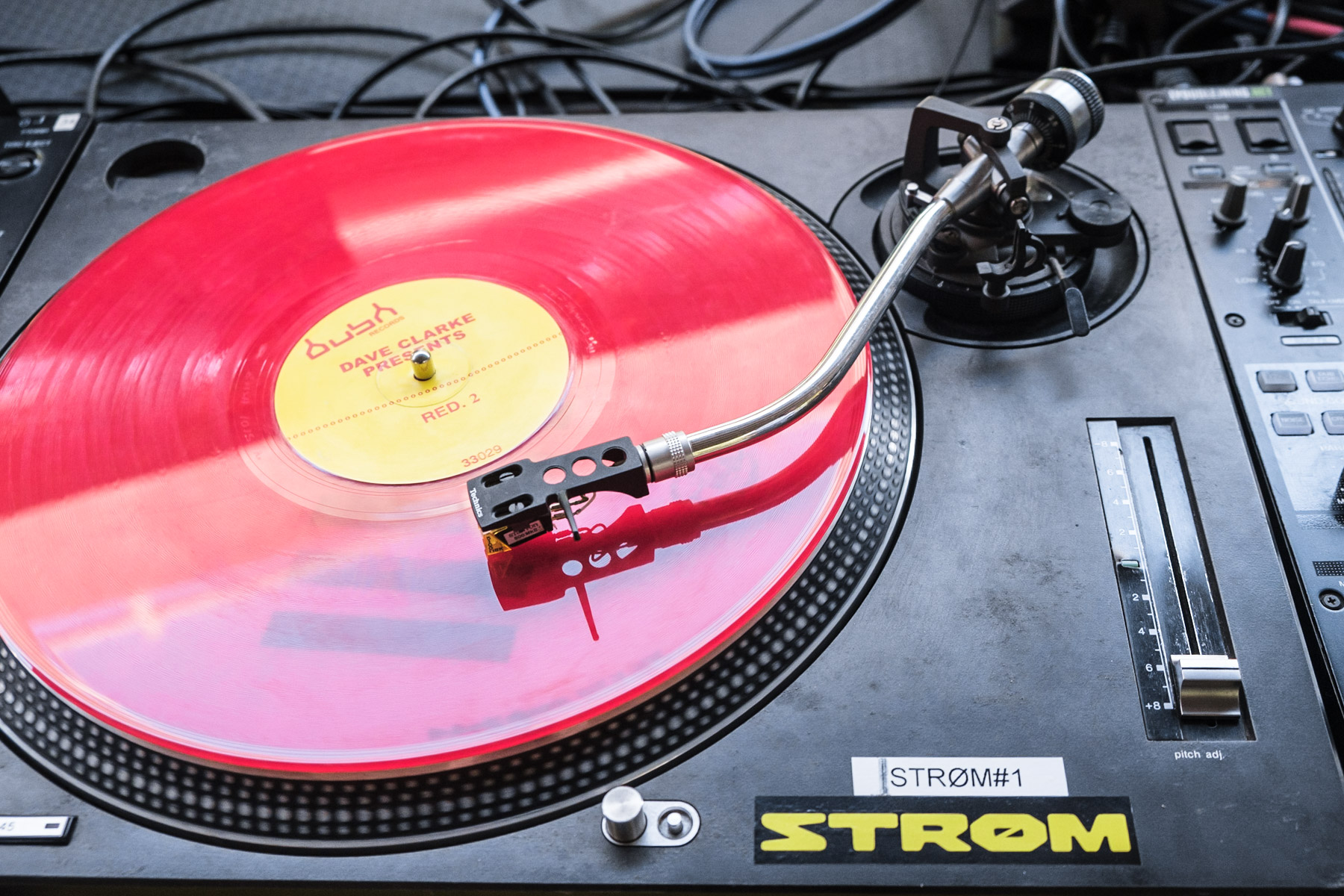